The Sunderbans, about half of what they were in the 1830s, still among the largest mangrove deltas in the world 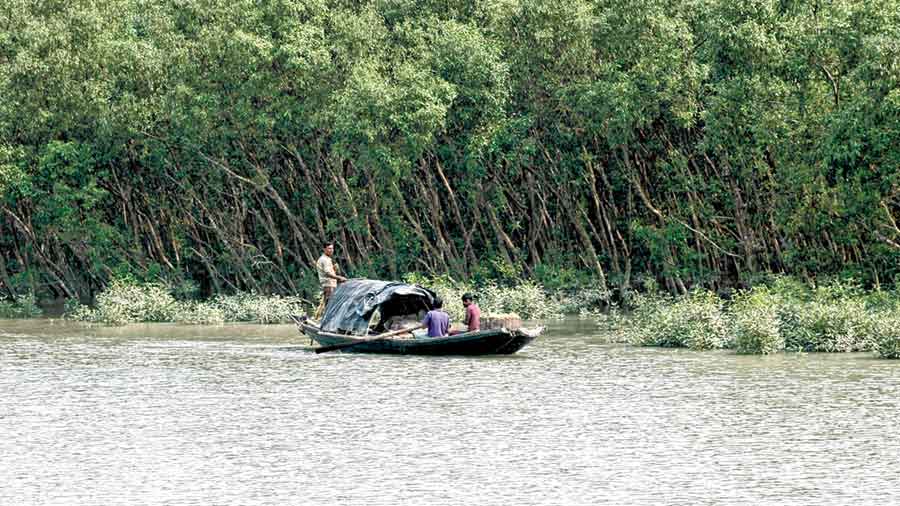 The Sunderbans today are about half of what they were in the 1830s and possibly a quarter since Job Charnock’s time, but they are still among the largest mangrove deltas in the world, and one of the 257 natural World Heritage sites and a Ramsar site. For three quarters of the 19th century, the Sunderbans witnessed constant assault. It was not until William Schlich, the Conservator of Forests in 1874, that the importance of the Sunderbans for purposes other than cultivation was realized. Schlich argued, “It is our duty to see that the supply [of firewood and timber] is not exhausted… the demand is certain to increase, and we must... make sure that the increase... is provided for. It has been said that the supply is inexhaustible, but such is not the case... the western part of the Sundarbans, which is that nearest to Calcutta, is already exhausted to a large extent, and... fuel-cutters proceed more to the east year after year.” He suggested that “… if the Sundarbans remain open to all comers, and if certain restrictions are not introduced, it seems no doubt that the supply will fall short of the demand... Sundarbans should be taken under forest management without delay…”

It was the ‘instrumental value’ — because of the existence of much-needed wood, fish, and honey — that saved the Sunderbans through changes in management policy. For a proximate forest, it is the instrumental value that saves it from obliteration. The Sunderbans were brought under forest management in 1875. “Reserved” and “Protected” forests were constituted under Act VII of 1878. By 1890, about 4,480 square kilometres in 24-Parganas were “Protected” forests. The Sunderbans functioned as a production unit, run by the State until 1980. This changed after the National Forest Policy of 1988 and a 1997 Supreme Court judgment leading to the discontinuation of forest working plans, eliminating harvesting the forest for firewood and timber. By this time, the intrinsic value had been instated. The process started with the 10th general assembly of the IUCN in New Delhi in 1969, followed by Project Tiger in 1973 when the Sunderbans were designated as one of the first nine tiger reserves in the country.

The instrumental value came to the fore again in the immediate aftermath of the 2004 Indian Ocean earthquake and tsunami. During January-February of 2005, several hoardings sponsored by the government of West Bengal exhorted citizens to “Take lesson from Tsunami, Save our Sundarbans. To save Kolkata, save Sundarbans.” The Sunderbans are often directly hit or impacted by cyclonic storms, causing extensive damage and untold misery to a large section of the population. Storm strikes are not a new phenomenon but the more intense ones are becoming more frequent in direct relation to increasing global warming.

The IPCC Working Group II recommends protecting and managing nature because “natural coastal vegetation, such as mangrove swamps can, in the right places, stabilise the shoreline and act as a buffer, absorbing the force of waves.” Taking such an approach, since 2020, the West Bengal government has planted 50 million mangroves plants and seeds every year. The plantation drive has also generated employment for the poor. For the local political dispensation and the poor, mangrove regeneration in the Sunderbans has instrumental value, but for the IUCN, Unesco, and nature and tiger lovers, it has intrinsic value.

Anamitra Anurag Danda is an environmentalist currently serving as Director, Sundarbans Programme, WWF-India and is a Senior Visiting Fellow, ORF