Advertisement
Home / Opinion / In a Spanish city, an alchemy of many things past

In a Spanish city, an alchemy of many things past 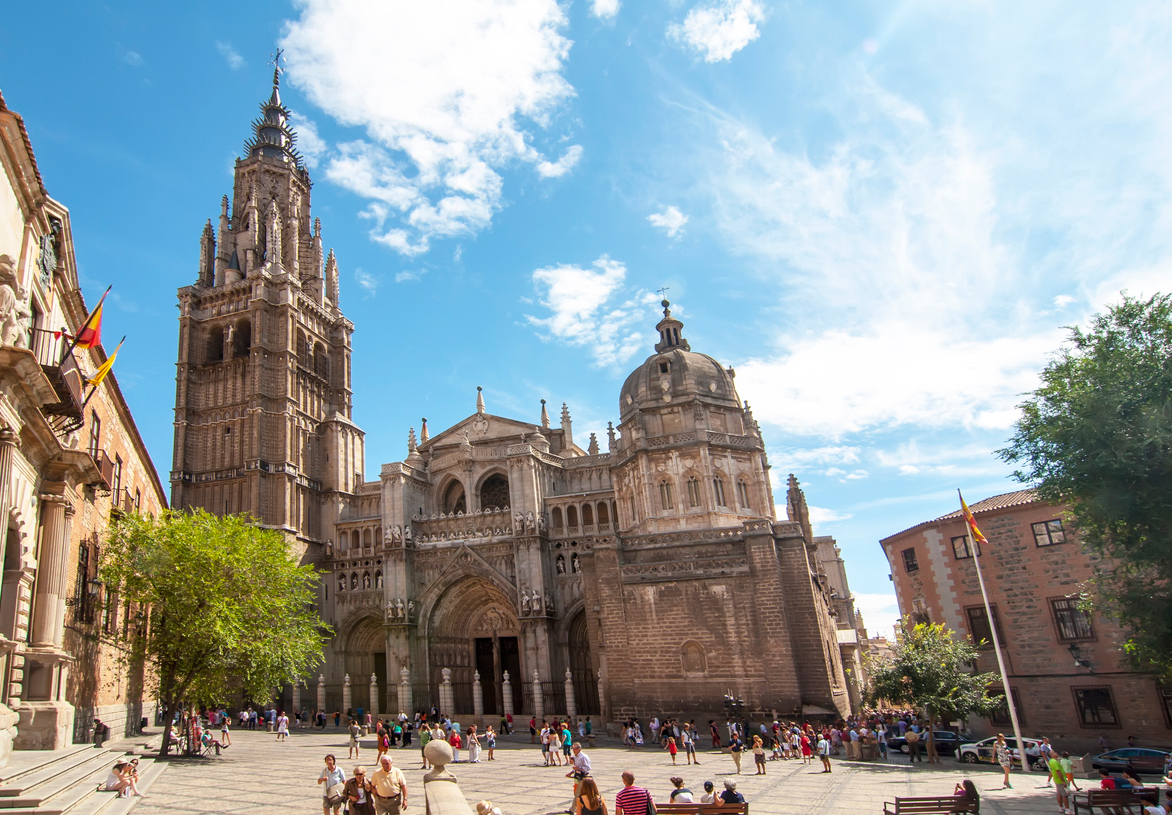 A familiar accent rang out amidst the cacophony of “hola” and “gracias”. Scanning the various skin tones and voices, my eyes came to rest upon a coloured man of slight build. Clearly, he was trying to bring some order to the general chaos of eager tourists milling around the meeting point. If he was in charge of the motley group of people from various corners of the earth — Portugal, Britain, Russia, Japan, China, India and the Americas — his co-worker Patrick was in charge of the six-wheel behemoth, which he navigated smoothly through the eight-lane highways and the labyrinthine alleys of Spain.

It isn’t an easy task shepherding a bunch of adults and young adults with diverse interests through a maze of history at a site they have never been to before. And yet, Mohammad Ahtasham Khan from Uttar Pradesh seemed to be doing it with ease, laying down the ground rules firmly at the very beginning. “If you aren’t at meeting points at appointed hours, you will be stranded in Toledo with the last bus having left an hour ago,” he warned.

Not many of us would have minded though. The ancient city set on a hill in the plains of Castilla La Mancha in central Spain has an abiding charm. En route to Toledo from Barcelona, Khan made us stop to get a view of this medieval walled city stretching all the way from the Tajo river on the right to the end of its precincts on the left.

Toledo as it stands today is the handiwork of the Romans, the Visigoths, a Germanic tribe, Arabs and Jews. All lived and worked harmoniously and observed their faiths side by side. The wall, first built by the Romans, was reconstructed by the Arabs and stands to this day. Further down, we disembarked and Khan led us inside through the Puerta de la Bisagra, one of the few gateways to the city that bears its own coat of arms. He carried in his hand a striking yellow-and- red flag. Whenever I fell behind in my pursuit of Insta-worthy shots, all I had to do was look for the flag. 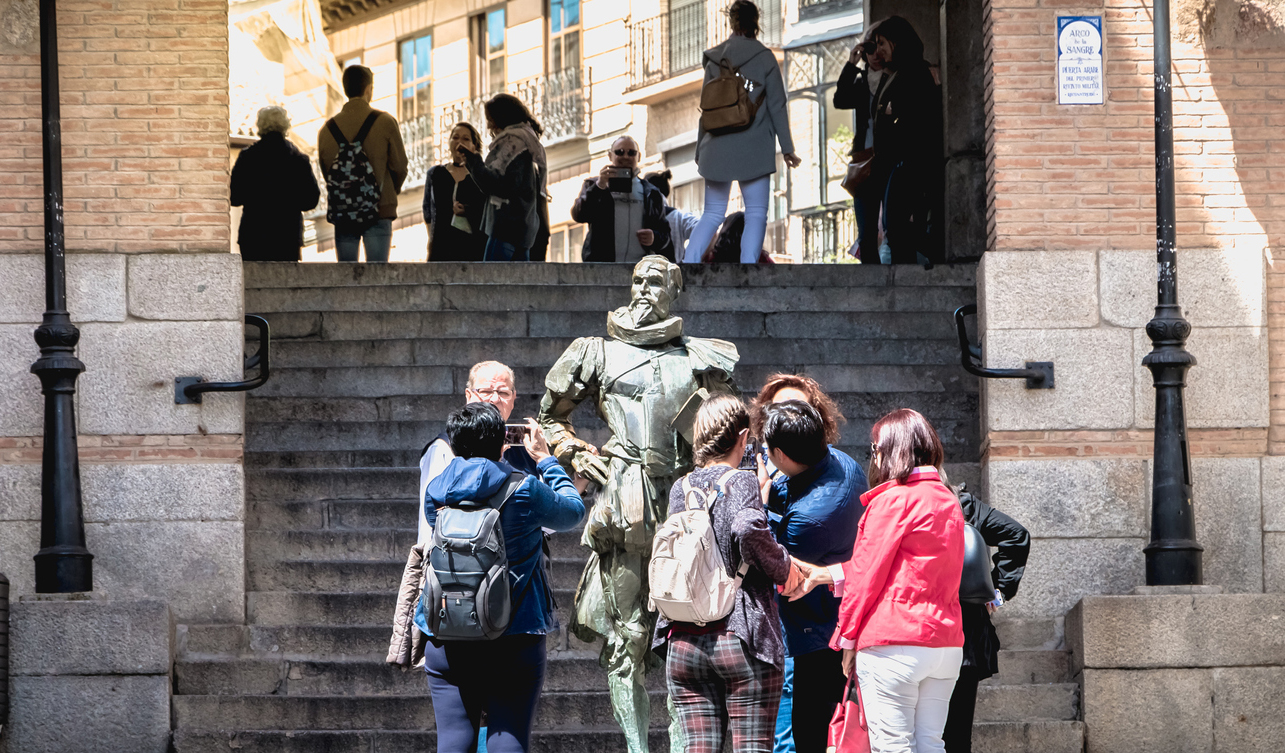 Tourists taking pictures of the Statue of Miguel de Cervantes near the main square of Toledo, Spain
(iStock)

Every European town or city worth its history has a Jewish ghetto and so does Toledo. It never ceases to surprise me how a community that controlled commerce and industry could be pushed within the confines of a walled quarter with the narrowest of lanes. The Toledo rulers, quite tolerant by measure, let them be in the Jewish quarters which had a 14th century synagogue, El Transito — it is now a museum. The quarters can be identified by the markers embedded on the pathways, walls and wells surrounding the area. In blue-and-white, one of these Jewish markers — the Menorah or the seven-lamp Hebrew lampstand — was mistaken for a free Wi-Fi symbol by a 21st century tourist, quipped Khan.

Among the other markers are the Hebrew word “chai”, meaning life; the number 18; the Star of David; hamsa or the palm signifying defence against the evil eye. These unobtrusive memory tools were probably the inspiration behind the Stolpersteine Berlin project in memory of the Holocaust victims, pointed out a friend after she saw my Facebook pictures. A spinning wheel beside the synagogue bears the name of every Jewish family that lived in Toledo, and anyone who has a Sephardic Jew as his ancestor will surely find his family name there, promised Khan.

The cathedral in Toledo has a place of pride as one of the top 10 medieval Gothic cathedrals in Spain with its flying buttresses, rose windows, ribbed vaults and pointed arches. Initially a place of worship of the Visigoths, it was turned into a mosque and later rebuilt as a Christian cathedral. The structure is a confluence of 13th century Mudejar and Renaissance art styles. Khan told his flock it houses a rich collection of art, including those by in-house artist El Greco, Spain’s noted painter Velazquez, Goya and others.

As we wove our way back through the maze of alleys of Toledo, there were all those souvenir shops selling everything possible from Gothic iPhone covers to ceramic-topped cork bottle covers. From the alleys we walked into the open Plaza de Zodocover, which is a typical public square like so many others in Spain, lined with shops on all sides and an archway on one side. Through the archway, down a few steps stands Miguel de Cervantes in a jaunty pose, much like his creation Don Quixote, with the unmistakable moustache curling right up to his ears and a book in his left hand. It’s easy to imagine Quixote in La Mancha, which must have had its fair share of chivalrous knights roaming the streets. Cervantes was apparently here in forced exile from Castile in 1569. Later, Toledians decided to commemorate him and installed the cast iron statue that looks into the town.

As we wound up our tour of Toledo, said the Muslim immigrant from Moradabad, “You will want to come back to Toledo not just for its cathedrals and monuments, but to immerse yourself in its history of tolerance and accommodation.”