Advertisement
Home / Opinion / If the Left has to recover, it must reinvent itself

If the Left has to recover, it must reinvent itself 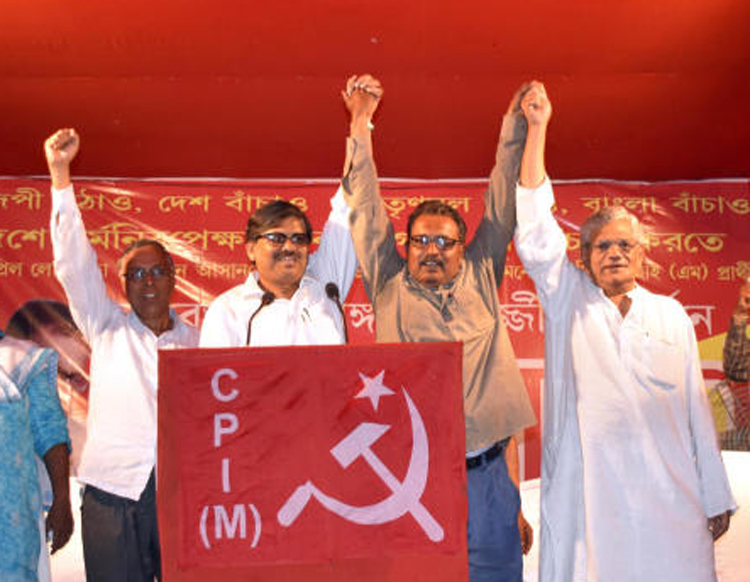 CPM general secretary Sitaram Yechury (extreme right) campaigning for Lok Sabha Election 2019 in West Bengal. Today there is little to distinguish the Left from others.
(The Telegraph file picture)
Prabhat Patnaik   |     |   Published 10.07.19, 03:39 AM

I am often asked: why has the Left, so powerful less than a decade ago, suddenly got eclipsed? The question is pertinent. True, the eclipse of the Left is mainly in the electoral arena, and the Left’s strength has to be judged in much more than electoral terms. But in one respect at least, which I consider important, the Left has got eclipsed, and this relates to its ability to draw young people into its fold. It has always been able to draw some of the best and the brightest among the youth into its ranks; it still does, but not to the same extent. The hope that with Hindutva’s ascendancy, there would be an influx of students to the ranks of the Left, which appeared justified some months ago, has been belied for the moment.

There are, of course, longer-term reasons for the decline in the Left’s appeal: the collapse of the Soviet Union, the apotheosis of consumerism in other socialist countries, and the change in the balance of class forces all over the world against the working people because of globalization have weakened the Left and undermined its strategic perspective. These are all well known; but there is something more, namely that in quotidian life today there is little to distinguish the Left from other political formations. True, Left leaders in general lead more simple and austere lives; but that in itself does not draw people to the Left any more than the austerity of an ashram does.

The basic objective of the Left, to work for a socialist society, normally gets translated into a set of immediate demands for which the Left fights; and these distinguish it from all other political formations. In the fifties, sixties and the seventies, this demand was for land reforms; and wherever Left governments came to power, their immediate task was cut out, to pursue land reforms. The first communist government in Kerala was overthrown because it attempted land reforms, although these reforms did get instituted subsequently. In West Bengal, the first two United Front governments also initiated land reforms, which were resumed by the Left Front government in 1977.

Apart from completing the initial phase of land reforms in states where it was strong enough to come to power, the Left also fought for the decentralization of power and resources, from the Centre to the states and from the states to the panchayats. These were demands that other political formations either did not raise, or did not raise seriously enough. Although Rajiv Gandhi introduced the constitutional amendments empowering panchayats, the Congress, except in Karnataka under Devaraj Urs, was never particularly serious in effecting decentralization. In the popular perception, therefore, the Left stood apart. It had ideas about changing society, even short of socialism, that no other formation had; and all this in addition to the early Left demand for the formation of states on a linguistic basis that had found general acceptance until recently when the erstwhile Andhra Pradesh was bifurcated.

Today there is little to distinguish the Left from others. There is still plenty of scope for land redistribution even in states where the Left has sizeable strength, but these no longer attract the Left’s attention. It has also compromised on its basic demand for decentralization of power and resources by agreeing to the goods and services tax that abridged states’ rights. This was done in the misplaced belief that this tax would bring benefits to Kerala, which was considered a ‘consumer state’. The argument was not based on principles; it has been proved wrong in practice. Likewise, notwithstanding the Left’s ideological opposition to neo-liberalism, Left governments have vied with others in attempting to attract foreign and Indian big business to states where they wield power.

These moves may be defended on purely empirical grounds, but what they entail is that there is little to distinguish between the Left and other political formations. There is not much, as in the old days, to attract a young person to the ranks of the Left.

If the Left is to recover its old elan, then it has to reinvent itself, for which, among other things, it has to take principled positions that give the country an alternative direction and also capture the imagination of the young because of their sheer boldness. This is not difficult at the moment since the ascendancy of Hindutva is threatening to unleash chaos and mayhem in every sphere.

I shall cite just two instances where the Left can and must intervene actively. These are quite apart from the general defence of democracy and secularism and intervention on class issues that it must engage in. The first is the Bharatiya Janata Party’s proposal to generalize the National Register of Citizens from Assam to other parts of the country. In the case of Assam itself, even though it was part of the Assam Accord, the idea of displacing large numbers of people, no less than 40 lakhs or thereabouts, is too horrendous to contemplate. But its generalization to other parts, and a selective expulsion of Muslims who do not make it to the NRC, would be nothing short of an ethnic cleansing, in fact the largest ethnic cleansing that the world would have ever seen.

In the 1970s, Idi Amin, the Ugandan dictator, had insisted on the expulsion of Ugandan Asians who held British passports. He had been roundly condemned by the world for this act of utter inhumanity. But his move at least had been against people who were relatively well-off and had a country to which they could go, since Britain could not possibly deny entry to persons holding British passports. But an ethnic cleansing that displaces persons who do not have citizenship rights in any other country, and who are among the poorest in the world, is infinitely worse than what Idi Amin had inflicted on the hapless Ugandan Asians.

Of course, it would be argued with some justification that there will be no actual expulsions, no pushing people back to Bangladesh, no ethnic cleansing at all, for the scale on which it will have to be done is forbiddingly enormous, that all the noise over NRC is just a way of putting fear into the minds of the minorities. But this very putting of fear into the minds of the minorities has to be combated. Besides, one cannot just assume such a denouement of non-expulsion; it has to be enforced.

The second area where the Left must intervene actively is with regard to Jammu and Kashmir where Amit Shah is now claiming that Article 370 had only a temporary tenure. This is wrong, and also quite irrelevant, for nothing has changed in Kashmir from the days when Article 370 was incorporated into the Constitution to make its abrogation warranted. Indeed things have become infinitely worse in the matter of winning ‘hearts and minds’ of the people of the Valley. There must be no interference with any provision of the Constitution, whether Article 370 or Article 35A that restricts the ownership of land in Kashmir. The Left’s stand on these issues is clear; the point is to launch nationwide campaigns over them.