Coronavirus’s second coming can be attributed to a number of factors; institutional failures and public apathy are among them 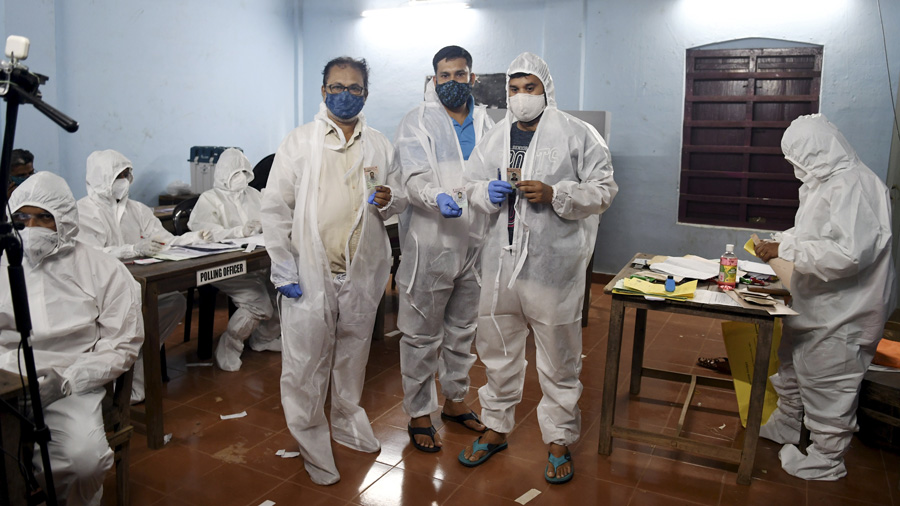 COVID-19 positive patients show their voters ID card after casting their votes during Kerala Assembly Polls, in Thiruvananthapuram, Tuesday, April 6, 2021.
PTI
The Editorial Board   |   Published 07.04.21, 12:11 AM

It appears that Covid-19’s second wave in India may be even stronger than the first. The existing data point to its troubling potency. India has witnessed a massive surge in the number of daily infections with eight states — Maharashtra, Punjab, Uttar Pradesh, Chhattisgarh, Karnataka, Tamil Nadu, Madhya Pradesh and Delhi — bearing the brunt of the caseload. Bengal, which is witnessing public gatherings on account of an inexplicably long election during a pandemic, has no reasons to be complacent either. There were around 2,000 new cases in the state on Monday; the numbers could be higher given the poor rate of testing in such districts as Purulia, Bankura and West Midnapore. The deployment of staff for election duty has made it difficult for some of the districts to meet their daily testing targets. The tidings are equally grim at the national level. During the first wave of the pandemic, it had taken 61 days for the caseload to rise from 25,000 to 92,000. The corresponding time is merely 22 days this time around.

Coronavirus’s second coming can be attributed to a number of factors; institutional failures and public apathy are among them. A sense of complacency seems to have engulfed India — a modelling endeavour supported by the science and technology ministry had predicted the end of the pandemic by February this year — even as large parts of the world battled fresh assaults by the virus. This smugness may have been instrumental in laxities creeping into testing and surveillance mechanisms. Public indifference — the result of fatigue, bravado and sheer stupidity — towards the need to maintain safety protocols has also been a contributing factor. The government is at fault too, permitting large religious, social and political gatherings with little concern for the risks posed by these events. To prevent India from going under this wave, the following measures should be implemented on a war-footing. Surveillance, testing and tracing mechanisms must be revived: the thrust must be on decentralizing the monitoring apparatus. The vaccination programme — India can now fight the pandemic with medicine — must be widened to cover as many vulnerable constituencies as possible. Dispelling doubts about the vaccines and bringing vaccination to the door of households must be prioritized. The healthcare apparatus, especially in the nation’s hinterlands, must be prepared to cope with the rush of patients. Hopefully, India will survive the second wave with minimal medical casualties and vilification of minorities.