The personality cult afflicts the Centre and the states 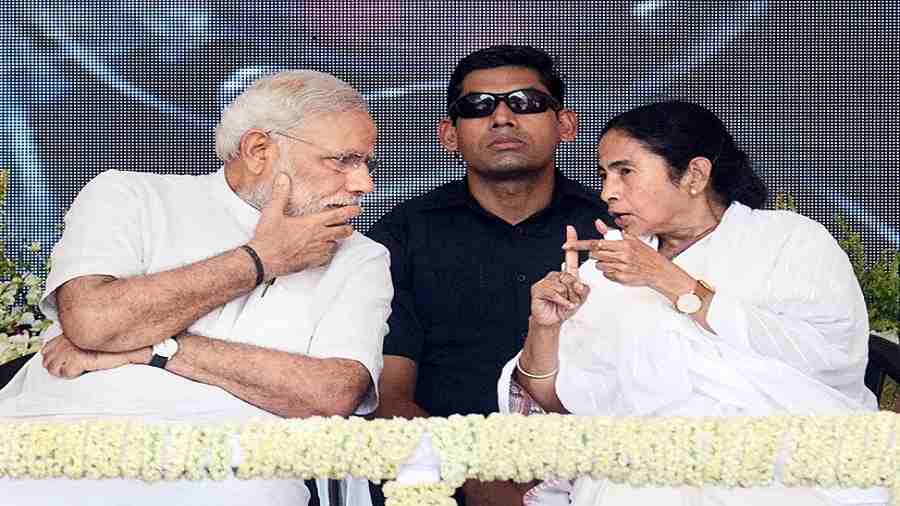 In 1937 — a decade before the formal declaration of Independence — Indians got a measure of self-rule when governments elected on a limited franchise were formed in the different provinces of the raj. This was seen as a step on the road to full representative government. Shortly after a Congress government was sworn into office in the Madras Presidency, a Tamil intellectual made a remarkable speech about leadership, whose ideas strikingly resonate with the political culture of India today.

The intellectual in question, K. Swaminathan, was at the time a professor of literature at Presidency College. Speaking in 1938 at the Annamalai University, he told the assembled students that there were, in essence, two different kinds of political leaders — those who saw themselves as indispensable and those who did not. He singled out one name in the latter category, writing: “Mr. Gandhi has been deeply concerned and studiously careful these last three or four years to train his successors. His last desire is to make himself indispensable… Neither Jawaharlal Nehru nor Rajendra Prasad would be what they are but for Gandhi; and yet neither is a mere yes-man. Mr. Gandhi could make heroes out of common clay; what can he not make out of native gold? Anything, except mechanical images of himself.”

Having offered a salutary example, Swaminathan next held out a warning. Thus, he said: “But there are other leaders who do not trust their followers and will allow them no freedom of action, sticklers for a military discipline, preferring automata at their back to free and self-reliant workers by their side. Such leaders are like the tamarind tree, perhaps great in its day and useful in itself, but destructive of life and growth in others. They tolerate no differences, they resent even friendly criticism. They bear, like the Turk, no brother near the throne. And when they go, they leave behind the barrenness of desolation.”

What “our country needs to-day and what our hostels can help to produce,” said Swaminathan to the students of Annamalai University in 1938, was a number of political leaders “each a little above the average. I don’t think we shall have much permanent use for a single Superman so much above his fellows that between him and them a deep impassable gulf for ever remain.”

I recently came across the text of Swaminathan’s lecture  in his papers and read it with a shock of recognition, since the warnings he issued in 1938 are even more — indeed, far more — relevant to the India of 2022, when we have a prime minister who has built around himself what may be — because of the colossal amount of party and government money spent on its making and the sheer number of human beings who participate in it — the greatest personality cult in the history of the world.

I have previously written in these columns about the prolific manifestations and dangerous consequences of Narendra Modi’s cult of personality. So I won’t rehearse those arguments again; instead, let me note that this tendency towards the personification of power is visible not only in the Union government but in many state governments as well. Mamata Banerjee may, when it comes to elections to the assembly and to Parliament, be bitterly opposed to Narendra Modi; yet her style of politics markedly resembles his. She seeks to embody, single-handedly and in her own self, the Trinamul Congress, the government of West Bengal, and the past, present and future of the Bengali people themselves.

Had Professor Swaminathan been around to observe these chief ministers, he might well have said of these leaders that they tolerate no differences, they resent even friendly criticism. That they prefer automata at their back to free and self-reliant workers by their side. That they are destructive of life and growth in others. That they seek to make themselves indispensable, showing no interest in (or indeed aptitude for) training capable successors. That they elevate themselves so far above their fellows that a deep and impassable gulf between the Superman (or Superwoman) and the citizens they are in theory answerable to remains.

Before I am accused of equivalence, let me state that I recognise that these are different kinds of authoritarianism, with different kinds of impact. Modi, at the national level, and Adityanath, in India’s largest state, combine authoritarianism with majoritarianism, namely, the stigmatisation and persecution of religious minorities. Modi and Adityanath are also arguably more ruthless in misusing State power to suppress the media and incarcerate political dissenters. That said, it can scarcely be disputed that the politics of Mamata, Kejriwal et al is likewise centred on the consolidation of personal power and personal authority by using State power and public funds towards those unsalutary ends.

Cults of Supreme Leaders have usually flourished in totalitarian regimes, whether military dictatorships, fascist States or communist regimes. The fancy that one individual, even, indeed especially, if he or she occupies the highest political office, can embody, represent and direct the will of all citizens is profoundly antithetical to the idea of democracy.

As we enter our seventy-fifth year of Independence, we are increasingly becoming a democracy ruled by individuals with authoritarian and even despotic tendencies. This is bad for our minds — making them chained and uncritical instead of open and free — but bad for our lives too. Leaders obsessed with power and self-promotion will neglect the everyday responsibilities of development and governance. Leaders who centralise all decision-making in themselves, refusing to empower or trust ministers and public servants, are unsuited to effectively administering a large, populous, diverse state like West Bengal, let alone India itself. Leaders who hear endless praise of themselves from a closed circle of chamchas will make far worse prime ministers (or chief ministers) than leaders who have an active feedback loop, who accept and respond to criticism from political colleagues, political opponents, and an independent media.

Our country’s economic promise will not be redeemed, our social harmony will not be enabled, our national security will not be assured by having a single Superman running the Government of India from New Delhi. That an authoritarian prime minister is complemented by so many authoritarian chief ministers further imperils our prospects as a nation. India, as well as Indians, will be far better served by leaders who can listen and learn — both from domain experts and from the citizenry at large — who can delegate authority to their ministers (and accord credit to them when that is due), who can respect the autonomy of public institutions and the freedom of the press, who can forego name-calling in favour of a constructive dialogue with the political Opposition.