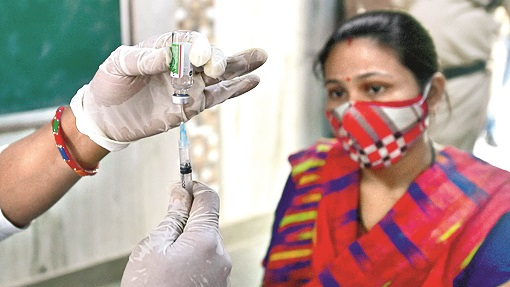 The Narendra Modi government’s ineptitude (or call it complicity with monopolists’ extortions) knows no limits. In the midst of a terrible pandemic when there is a shortage of vaccines, there are three obvious things any government must do: first, distribute the vaccine free among the people, which is but a recognition of everyone’s right to life; second, introduce monopoly purchase of the vaccine by the government, no matter what the criteria and through which channels it chooses to ration it out among the people; third, fix the purchase price at a fair mark-up over unit prime cost.

The vaccination regime in India began with these features (although private hospitals distributing government-procured vaccines charged Rs 250 per dose, which was questionable but not large enough to cause disquiet). Most inexplicably, however, the government ‘liberalized’ vaccine sale from May 1. The Central government would now buy only half the vaccine output and provide it free to those above 45. State governments and private hospitals would buy the other half and distribute it to those aged between 18 and 45.

The prices paid by the three sets of buyers are different. For Covishield, prices would be Rs 150 for the Central government (even though this is not yet settled), Rs 300 for state governments (originally Rs 400 but lowered later) and Rs 600 for private hospitals. Covaxin prices would be Rs 150, Rs 400 (reduced from Rs 600 originally) and Rs 1,200, respectively. Many state governments have announced that they would provide the vaccines for free but given the parlous state of their finances, they may not be able to do so. Several people would be forced to access private hospitals and pay hefty amounts to get vaccinated. India would be an exception among countries, almost all of which are now providing free vaccines to their people.

Even if the state governments find the resources to provide free vaccines, this would entail a wholly unwarranted transfer from state exchequers to a duopoly of vaccine-producing firms for the prices they are charging are scandalous. At the current exchange rate, what the Serum Institute of India, manufacturing Covishield, is charging state governments (Rs 300) translates to $4.00 per dose; its price to private hospitals (Rs 600) comes to $8 per dose. But AstraZeneca, whose product is Covishield, is charging $2.18 per dose to the European Union and $4 to the United States of America; the Indian prices are thus higher than the prices for the EU and the US.

The higher price in India is not required to earn surpluses for expanding the firm’s capacity. For such expansion, the Central government has separately given SII Rs 3,000 crore. Besides, the SII can raise resources through the usual channels. The higher price for Covishield, therefore, is totally unjustified.

Over-charging is even greater for Covaxin manufactured by Bharat Biotech. BB is charging the Central government Rs 150, state governments Rs 400 (Rs 600 originally but later reduced) and private hospitals Rs 1,200. Its excuses for charging even more than the SII are ridiculously feeble.

It claims to have spent Rs 350 crore on clinical trials, which it wishes to recoup. But significant amounts of public funds have gone into the development of Covaxin (R. Ramakumar, Scroll.in, April 26). Besides, even if BB’s claim is accepted, the additional charge compared to Covishield, which it is levying on state governments and private hospitals, Rs 100 and Rs 600, respectively, assuming the same ratio of sales as above, and total sales of three crore doses per month from May onwards that it envisages (in fact sales are supposed to increase), would recoup this amount in just 20 days, after which higher prices on this score cannot be justified even by BB’s own logic.

Likewise, BB argues that Covaxin prices have to be higher than Covishield as the latter got a grant of $300 million from the Bill and Melinda Gates Foundation. But the weighted average price for Covaxin, again assuming the same ratio of sales, is Rs 475 per dose, which is Rs 175 more than for Covishield. On a sale of three crore per month, even ignoring increases in sales that must occur, this amount can be recouped in just over four months; what is the justification for higher prices after that?

The argument that resources are needed for expanding capacity is, once again, untenable, since the Central government has just given Rs 1,500 crore for BB’s growth. It is obvious, therefore, that the two firms are blatantly engaged in profiteering during a pandemic. This is ironically confirmed by the very reductions in prices they have announced.

Such profiteering is unacceptable. It is especially odious when public money goes to finance their growth, and has gone into developing the product of one of them. But profiteering has become possible because the Central government has ‘liberalized’ vaccine sale. ‘Liberalization’, amazingly, has not entailed any consultation among the manufacturers and state governments and private hospitals, or any scrutiny of their costs of production, or any agreement on the pricing formula based on such costs. For agricultural products, there is a Commission for Agricultural Costs and Prices that fixes the minimum support prices and the procurement prices by looking at costs of production; but for a critical commodity like the Covid vaccine, even this minimal procedure has not been followed. The companies have simply told state governments and private hospitals, ‘This is our price, take it or leave it’, knowing perfectly well that their clients cannot afford to ‘leave it’. And, strangely, the Central government, concerned about the price it has to pay, has left state governments and private hospitals completely at the mercy of these firms.

The motive for ‘liberalization’ is mysterious. In almost all other countries at present, vaccine producers do not sell to private hospitals, which was the case in India before ‘liberalization’. The earlier policy, of the Central government bulk-buying from the two firms at a pre-fixed price and then distributing the vaccines, should have continued. Why it was discontinued defies reason when this measure has encouraged profiteering.

Short of taking over the firms, either permanently or for the duration of the pandemic (as Spain did to private hospitals earlier), a Central government that cares for the people has two options which it must follow simultaneously: one, use ‘compulsory licensing’ to start new production facilities that break the stranglehold of the duopoly and expand capacity more rapidly; two, compulsorily buy the entire output at Rs 150 per dose and then distribute through various channels as before. And in all cases, it must arrange that vaccination is free for the people. But does the Modi government care?