State of play: The migrant is trapped between the home and the world 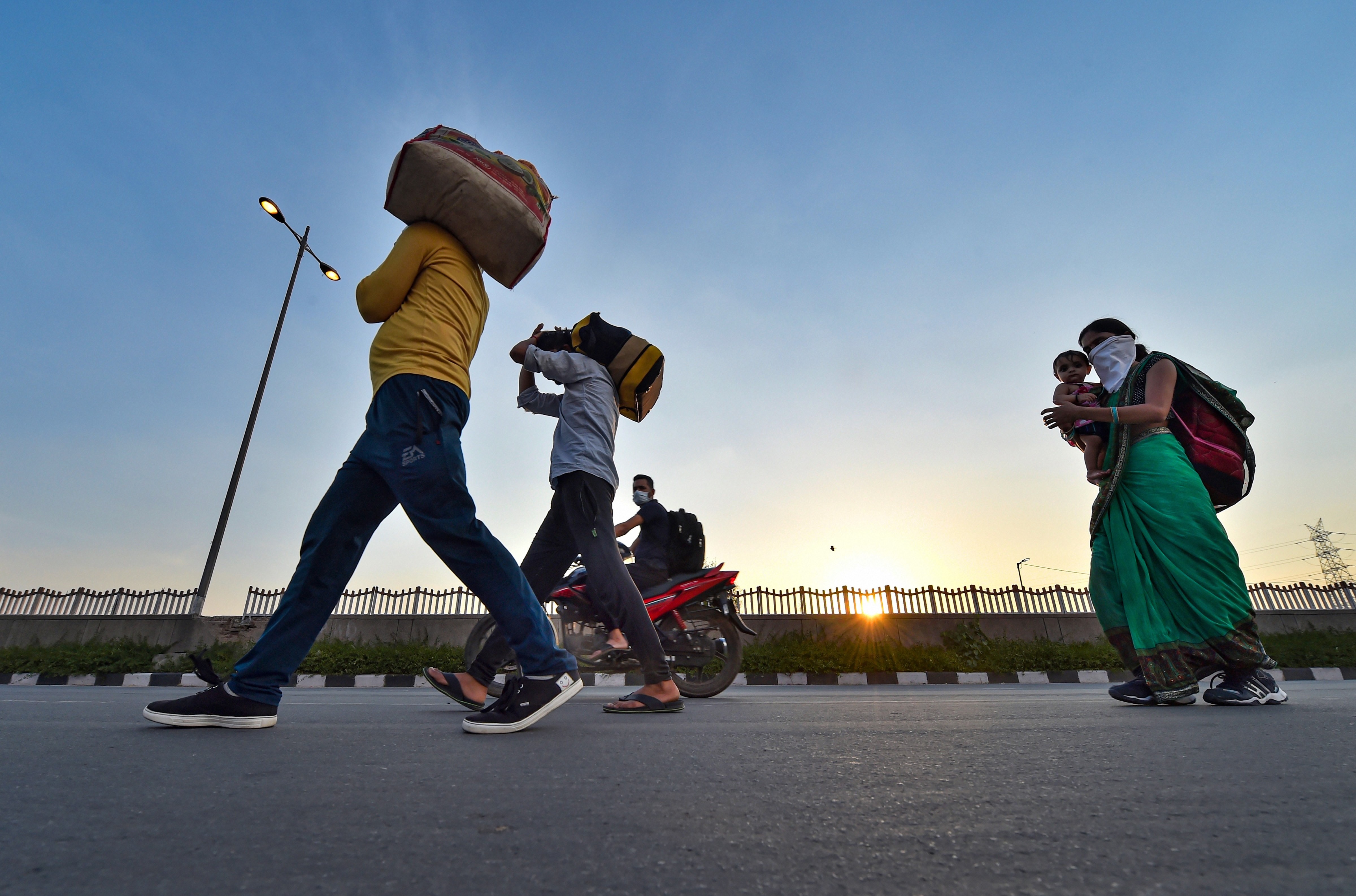 Migrant workers along with their family members walk along the Delhi-UP border road during the ongoing Covid-19 nationwide lockdown, in East Delhi, Tuesday, May 5, 2020.
PTI
Sankarshan Thakur   |   Published 05.05.20, 06:43 PM

“In a succession of thousands of years,/ In years of poverty and disaster,/ What existed was not a person,/ But countless disfigured cripples.

One spent his whole life as a cobbler/ Formed no judgements higher than his boot tree./ Another turned two millstones all his days:/ Behind their pointless turning he turned grey./ A third man plowed the soil from childhood on/ And never visited the nearby town...

...And in the villages, emptied of people/ Where brutish fear of the city prevailed/ A mildewed life, barbarically wretched,/ Limped from one hut’s doorway to another,/ Like a blind old nag, ribs sticking out,

Walking in its sleep around/ The same old pile of manure:/ The wooden plow, the tavern, the priests...”

“Fragments and the Whole” — Nikolai Bukharin

We can all now sigh in relief and feel a little pleased too, why not? We are sending the workers home. They are not having to walk any more, we are sending them back in chartered buses and special trains, never mind who paid for tickets, who didn’t, at least they are going home. Washing comes highly recommended these days, we can give our collective conscience a collective wash. Very soon we will stop being haunted. We will no longer see images of our countrymen and countrywomen trudging thousand-mile routes through the heat of day and the darkness of night, often smacked or whipped along the way, often forced to frogleap, sometimes sprayed with chemicals, sometimes tear-gassed. But no longer that ghoulish everywhere spectacle of them dragging their trussed worldly goods, their bewildered kids, hungry, thirsty, hapless, exhausted, and yet so tormented by their present that it had to be fled and a future chased. A future that lay in most of their pasts, their homes, those homes that they had had to forsake to arrive here, from where they are now being driven, hither-thither, in panicked tens of thousands, like frantic wildebeest droves in crocodile-ridden waters.

But all of that is now the past. Now there are fleets of buses and especially commissioned train wagons. They will be seated, sealed, and ferried home. They will vanish from the gaze of cameras and melt peaceably into the vastness of this geography. Their troubles will no longer trouble us. We’ve done right by them, we have sent them home. We can feel unburdened.

What a delusory salve this is to the guilt we must all bear.

All they wanted was to go home and we sent them home. Job done. It was never conscionable that they be left to walk all the way. The very young and the terribly elderly were involved, after all. And hundreds, often thousands, of miles were involved. A dozen and a half were found roasting in the belly of a concrete mixer heading from Maharashtra to Uttar Pradesh, and one of them said that the heat inside was more bearable than their hunger. Some three hundred odd died along the way. One such was walking from Bangalore to his native Ramasundaram in Andhra Pradesh’s Chittoor. He collapsed at the approach to his village. The villagers would not help, not admit him anywhere in. They were spooked, he may have been carrying corona. He died, and his remains were not let in either. Doctors were called, a test was done. The cadaver tested negative. It was then bestowed the post-mortem dignity of a shroud and a garland of marigolds.

The walking should never have been allowed, it made for such poor optics, all these folks ant-crawling bereft highways, this class of migrants, the multiple millions of them, outing the ugly underbelly of a nuclear superpower, making streamers of the lie of achchhe din. Such poor optics.

When the going is good, we most often do not want to know who makes the going as good as it is, who turns the wheels so everything proceeds like clockwork. When the going stops to be good, we suddenly discover our unwanted. We cast them out of homes and workplaces, we rob them of their jobs and wages, we strip them of their dignity, we want them gone, banished. They deserve to be penned in the misery of their pestilential ghettos. They deserve to be heckled and thrashed should they try to break out. Trouble-making termites. That’s what we’ve made of our poor millions, we’ve made of them a human pandemic that deserves urgent putting away.

But they will not be put away. They are a necessary undertaking, wherever they might have travelled to. Where they have gone, or are going, there lies little succour, they will likely afford no more accommodation than the temporary accommodations of a place called home. That ‘home’ had long become an insufficient place, poor in its provisions. That ‘home’ they had been forced to eject from.

“One spent his whole life as a cobbler/ Formed no judgements higher than his boot tree./ Another turned two millstones all his days:/ Behind their pointless turning he turned grey./ A third man plowed the soil from childhood on/ And never visited the nearby town...”

Such was the ‘home’ they fled, and such does home remain. Bukharin wrote of deep pre-war Russia. The year was 1937. The circumstances of deep India in the year 2020 aren’t radically different. The return of the natives is unsustainable. There will be consequences that cannot all be imagined or predicted yet, but they will mostly be adverse consequences. There is, in the works, a demographic shift that will mean more than merely human dislocation. Portents are travelling home, they will come to bear.

It isn’t only about places they are headed to; it is equally about places they have left. Who, after all, are these people that we are finally so relieved to see off to places we couldn’t care about? They are the engines of our lives, underpaid, overworked engines. They work our factories and sheds, they put the shine on our diamonds and they sweep our drains, they keep our homes in order, they put the cooking on our tables, they clean our cars, they run our lifts, they drive our cars and cabs, they are the oil that lubricates the turning of our days. It perhaps matters minimally that such folks are gone. We are in lockdown, we must manage on our own. But some day, this will end and we will open our doors and find no one there. So don’t at all sense relief in these departures. Don’t at all feel pleased. The troubles of our making haven’t boarded any leaving bus or train. They’ve only left the whole more fragmented.