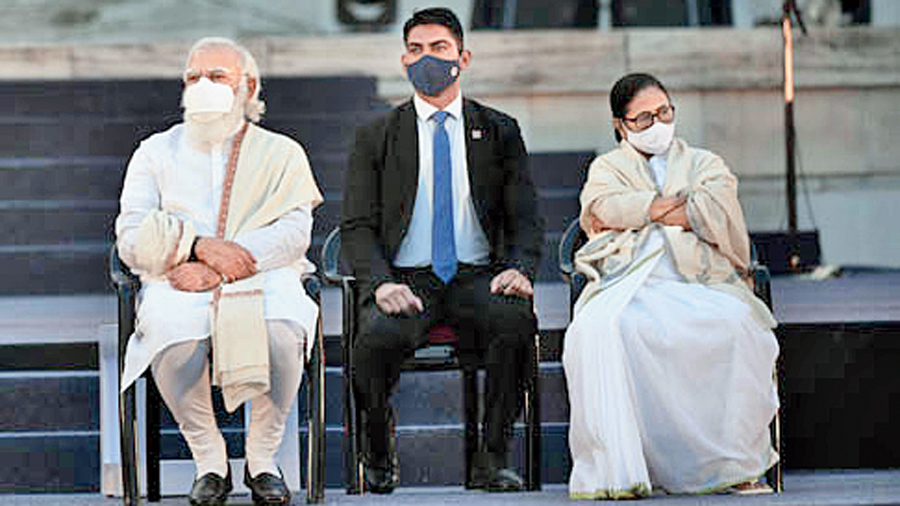 Any phrase when overused becomes stale and loses its meaning. ‘A historic victory’ is one of them. If every election victory is described as ‘historic’, as is often done in congratulatory messages, history begins to look ordinary, robbing us of our ability to discern events that can effect extraordinary changes. As a matter of fact, history records and remembers very few events in its annals and consigns the rest to oblivion.

Mamata Banerjee handing a humiliating defeat to the prime minister, Narendra Modi, and the Union home minister, Amit Shah, in the just-concluded West Bengal assembly elections will be recalled as historic for many reasons. For starters, Modi and Shah, who have created an aura of invincibility around themselves with the help of a section of the media that have allowed themselves to be enslaved, now look beatable in 2024. West Bengal has opened up real possibilities for making Modi a two-term prime minister. Events in the coming two-three years may hasten his departure even earlier. This is because his government will surely be crippled by its gross mismanagement of the second wave of the Covid crisis, which has inflicted deaths and distress on an unprecedented scale. The resultant economic crisis, whose heat is already being felt by common Indians in the form of steep price rise and widespread joblessness, will begin to take its toll on Modi’s popularity and, hence, on his vaunted capacity to win elections for his party. And once a leader begins to lose that principal touchstone of leadership in a democracy — the promise of keeping his party in power — the party itself, along with the rest of the sangh parivar, will start to look for alternatives. At the very least, the Bharatiya Janata Party will begin to look fragile. To know that this process has already started, one only has to look at Subramanian Swamy’s leadership-questioning tweets. His is not a lone voice. He is an influential figure in the Hindutva establishment.

There is a second way Banerjee’s victory will be seen as historic. Her national profile and popularity have risen overnight because of the sheer scale of her party’s third successive win — 213 seats in an assembly of 294, improving upon its own tally of 209 in 2016. So stupendous is this achievement that even her own unexpected loss by a slender margin to Suvendu Adhikari in Nandigram will hardly dent her stature either in West Bengal or in the rest of the country. She is being rightly hailed as the ‘Bengal tigress’ who has single-handedly vanquished the mighty army of Modi and Shah allegedly supported by the pliant institutions of the Indian State — the Election Commission, Enforcement Directorate, Central Bureau of Investigation and the Income Tax department. The fact that an injured and wheelchair-bound woman, facing repeated taunts from her rivals, could achieve this feat will further add to her charisma beyond Bengal’s borders. Therefore, the non-BJP Opposition parties in India, divided and depressed until now and also suffering from the lack of a commonly acceptable leader around whom to coalesce, are likely to view Banerjee with a lot of hope. In 1996, the Communist Party of India (Marxist)’s “historic blunder” had prevented a tall Bengali leader, Jyoti Basu, from becoming India’s prime minister. Twenty-five years later, the first hints of a new possibility have emerged. Could Banerjee become the first Bengali to lead the nation from New Delhi? Suddenly, this question no longer looks far-fetched.

The historic import of her party’s victory lies also in the rude jolt it has delivered to the BJP’s toxic politics of communal polarization. As a non-Bengali who spent nearly two months witnessing the election scene in the state, I met many non-party Bengali intellectuals and activists who dreaded the prospect of the BJP coming to power and tearing apart the secular fabric of Bengali society with its Hindu supremacist ideology. I was wonderstruck by their spirited ‘No Vote To BJP’ campaign, which brought out the best of Bengal’s unifying socio-cultural traditions. Every morning, I read with disbelief the gritty coverage of the election scene in this newspaper because there is, sadly, no other media organization in India that punctures the hubris of Modi and Shah quite the way it is done in these pages. I have no doubt that at the root of this journalistic courage is a deep concern that Bengal’s distinctive heritage, which has been enriched by giants like Rabindranath Tagore, Nazrul Islam, Swami Vivekananda and Netaji Subhas Bose, to name only a few, must not be allowed to be destroyed by the BJP’s alien Hindutva invasion.

In this lies the wider national significance of Banerjee’s victory. By defeating the BJP decisively, the voters of this state have not only saved Bengal but they have also raised the hope of saving India. For it is obvious that with no great success to show on the development and governance fronts, Modi, Shah and the third Hindutva mascot, Yogi Adityanath, will increasingly resort to the hate-filled politics of Hindu-Muslim division to win elections. India has already paid a heavy price by allowing such politics to gain ascendancy. The consequences of it gaining more electoral successes in the future will be calamitous for our society, our Constitution and the Indian Republic. After all, the BJP and the sangh parivar have not hidden their ultimate goal of transforming India into a Hindu rashtra. Bengal has shown what the rest of India should do to foil this plan.

A politician’s true character is often revealed in how he/she conducts an election campaign. Both Modi and Shah failed this test miserably. The prime minister’s ‘Didi o Didi’ and ‘scooty’ jibes at Banerjee were cringe-worthy. Shah lampooned himself by boasting that the BJP would win 200+ seats and that the afternoon of May 2 would witness the chief minister going to Raj Bhavan to tender her resignation. The BJP’s tally could not even touch three digits, even though it had made the election a Modi versus Mamata battle. The arrogance and insensitivity of the top BJP leaders were further amplified by the party’s state functionaries. When four poor Muslim voters fell to the bullets of the Central security forces at Sitalkuchi, one former BJP chief in West Bengal said more should have been killed and the incumbent party president warned ‘naughty boys’ of ‘many Sitalkuchis’. Neither of them was publicly reprimanded by the prime minister or other top leaders of the BJP and the sangh parivar.

The callousness of Modi and Shah was also on display in their flagrant violation of their own government’s Covid-related safety guidelines. Indications of a second wave of the pandemic were available in February itself. Yet, the Election Commission was persuaded to hold eight phases of polling in the state. Furthermore, they came to address numerous rallies across Bengal, disregarding the fact that such events could become ‘superspreaders’ of the coronavirus. Banerjee also conducted an extensive campaign. But it must be said in her defence that she had strongly urged the Election Commission to conduct a shorter election. Modi also violated another canon of ethical electioneering. He became the first Indian prime minister to (indirectly) campaign for his party from foreign soil. He did so when, during his official visit to Bangladesh in March, he visited the shrine of Guru Harichand Thakur in Orakandi, with the aim of influencing the votes of the Matua community in West Bengal.

Modi’s image has taken a severe beating because of two convergent failures: his failure to handle the Covid crisis and his humbling defeat to bring his party to power in West Bengal. Never have the global media pilloried him as much in the past seven years as they have done in the past seven weeks. This is certainly debilitating for someone who wants to be seen as a great global leader. This is also deeply demotivating for his bhakts, who see in him a prime minister who could, like Russia’s Vladimir Putin, remain in command for a long time to come and lead India’s transition to a constitutionally proclaimed ‘Hindu Nation’. Besides the deadly virus, one brave and simple woman with the common touch has frustrated this game plan. May India conquer the virus. May Bengal conquer the throne in Delhi.