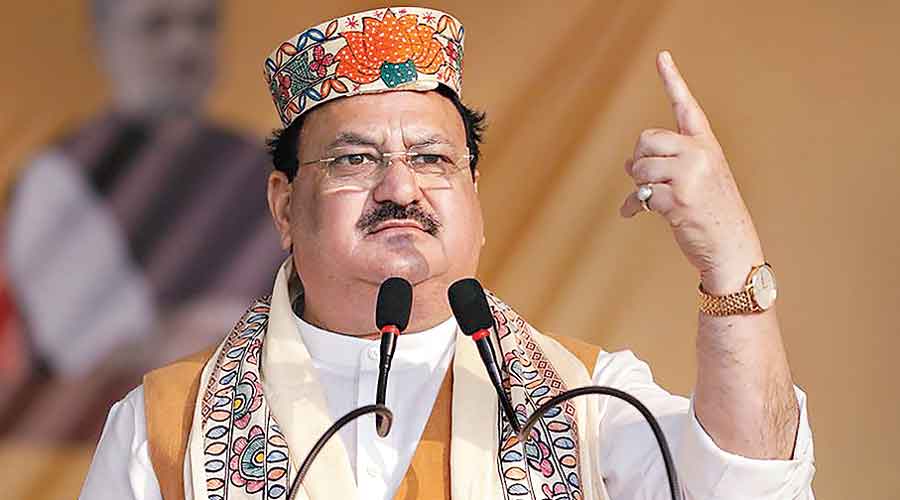 The Bharatiya Janata Party president, JP Nadda, finally got to savour his moment of glory. Although the National Democratic Alliance just about managed to scrape past the halfway mark, the emergence of the BJP as a dominant force in the Bihar polls was cause for a big celebration. This was the first significant achievement since Nadda took charge of the party from Amit Shah earlier this year. Nadda drove to the party headquarters in an open vehicle and rose petals were showered on him. It was a replay of the kind of welcome Shah used to get when the BJP won election after election. Even the prime minister, Narendra Modi, hailed the leadership of Nadda in his victory speech. Modi even raised the slogan, “Naddaji aap aage badho, hum aapke saath hai”. All this may have appeared to be too much for the otherwise low-profile leader, but whispers in the party corridors suggest that Shah’s gesture held more significance for Nadda than Modi’s pat. Much before Modi’s speech in the evening, Shah had reached Nadda’s residence to greet him with a bouquet for the party’s performance in Bihar. The big question on the minds of many people now is whether Naddaji, as the BJP chief is fondly addressed, can finally emerge from the shadow of the Modi-Shah duopoly.

The BJP-led government in Assam has been facing flak for its inability to contain the prices of essential commodities. Prasanta Phukan, a BJP member of the legislative assembly, who was a vocal critic of price rise when he was in the Opposition, added to the discomfiture of the government in the poll-bound state with his ‘solution’ to cope with price rise. “You can go to any shop and exchange your free rice for onions. You can also use paanchphoron in place of onions,” he said. His suggestion of barter sparked anger against him and the government. Television channels started futile visits to the markets to look for shops/vendors who were giving onions in exchange for free rice. Buyers gave vent to their anger by reminding Phukan how he used to hit the street with a garland of onions to protest against price rise when he was in the Opposition. But then times have changed for Phukan, if not for the common person.

So far, the BJP has fallen under the ‘also-ran’ category in Kerala. The party has always been plagued by factionalism in the southern state. To make things worse for the party — it is desperate to put up a decent show in the upcoming assembly polls — a senior leader, Shobha Surendran, who was ‘demoted’ from the national executive to the state unit as one of the vice presidents, has started rebelling. The stage is now set for a bigger drama with Shobha threatening to go public with how old-timers were being sidelined.

The myth that Chirag Paswan’s gamble to go it alone hurt the Janata Dal (United) and helped the BJP can be busted. The devil is in the detail. In reality, the Lok Janshakti Party’s solitary foray helped the Rashtriya Janata Dal the most and the BJP the least. While data show that the BJP got barely one extra seat because of LJP, it helped the RJD wrest at least 22 seats that the latter would not have otherwise won. Even the Congress has won at least six seats more than it would have because the LJP cut into the JD(U)’s and the BJP’s votes. The Congress tally would have been 13, not 19, had the LJP contested together with the BJP-JD(U). Although statistics alone do not decide the fate of the elections, the LJP helped the RJD-Congress more even in terms of atmospherics. So the Congress managers should thank Chirag Paswan for salvaging its prestige as 19 looks better than 13 or even less. This shows the pitiable state of affairs for the Congress. Insiders believe that the Congress would have been whittled down to three-four seats if it were not for the support of the RJD. What the party did in five years is known to the gods alone.

The Aam Aadmi Party has roped in the former Tamil Nadu chief secretary, PC Cyriac, who hails from Kochi, to steer the party’s foray in the upcoming local body polls in Kerala. In 2014, the AAP made headlines in the state when it fielded eminent candidates like the author, Sara Joseph, the journalist, Anita Pratap, and the former IPS officer, Ajit Joy — all of whom lost but garnered a large chunk of votes. However, the party sacked its convener, CR Neelakandan — a Gandhian activist — for declaring his support for select candidates of the Congress-led United Democratic Front, and the Communist Party of India (Marxist)-led Left Democratic Front in last year’s Lok Sabha polls.

The AAP declared its support for the LDF after its alliance talks with the Congress failed in Delhi. The septuagenarian Cyriac, who unsuccessfully contested the municipal polls in 2019 and assembly polls in 2016 as an independent, will lead a corporate style selection of professionals as candidates in the upcoming polls.

Luck and BS Yediyurappa have always been housemates. Just when BJP hardliners were mobilizing to unseat the 77-year-old leader, who is considered
‘too soft’ by some, came the twin successes in the bypolls. The fact that his younger son, BY Vijayendra, helmed the campaign in the Sira constituency to give a debut win for the BJP has strengthened Yediyurappa’s hands. For now, at least, even the hardliners have begun singing hosannas to the chief minister who has otherwise crossed the age after which one is consigned to the dreaded margdarshak mandal.