Passengers of the 12844 down Ahmedabad-Puri Express had a close shave on Saturday night as the train travelled for 15km without an engine before coming to a halt on reaching an uphill slope. 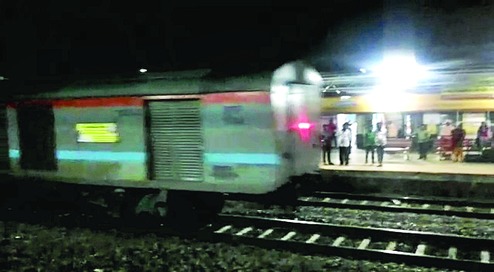 Bhubaneswar/Balangir: Passengers of the 12844 down Ahmedabad-Puri Express had a close shave on Saturday night as the train travelled for 15km without an engine before coming to a halt on reaching an uphill slope.

The mishap took place around 10.05pm on Saturday when the Puri-bound train had halted at Titilagarh railway station in Balangir for a change of engine.

When it looked like the engine had been attached to the bogies, the train began to roll without it in the reverse direction towards Kesinga, which is 413km from Puri.

The passengers had no idea as to what was happening before they came to know about the incident and panicked. Some of the distressed passengers even began to contact railway officials and the railway helpline.

"Everyone was scared and feared a major mishap as the bogies were moving on their own. It was the scariest moment of my life. It was a lucky escape as the train could have derailed in such a situation," said Priyadarshini Panda, who was on board the Ahmedabad-Puri Express.

In their preliminary inquiry, railway officials have found that non-application of skid-brake on the wheels of the coaches had led to the train rolling down the slope for 20 minutes without an engine.

Seven railway employees, including the loco pilots of the train, have been suspended for the incident.

"The downward slope made the bogies roll towards Kesinga. So we kept the line clear up to Kesinga. Since the slope is uphill after Kesinga, the train slowed down and railway staff and people managed to stop the train," said divisional railway manager, Sambalpur Joydeep Gupta, who arrived at Titilagarh on Sunday in the aftermath of the incident.

A railway official said that stones were placed on the tracks as it neared the upward gradient to bring it to a halt.

"We shall work on a plan to ensure the safety of the passengers. An inquiry has already been initiated and the team will give the report within three days," said Gupta.

To avoid a repeat of such incidents, the Railway Board on Sunday decided to start a month-long joint drive by operating and electrical departments of the Indian Railways regarding shunting of trains at stations.

According to the decision of the Railway Board, the shunting staff and loco pilots will be monitored and counselled.