Tourists visiting this Upper Assam town can now witness the arms, ammunition and armour of the Ahom era at the Ahom Martial Tradition gallery at Golaghar (cannon house) at Joysagar on the outskirts here. 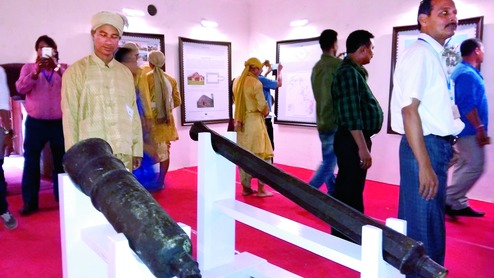 Sivasagar, May 20: Tourists visiting this Upper Assam town can now witness the arms, ammunition and armour of the Ahom era at the Ahom Martial Tradition gallery at Golaghar (cannon house) at Joysagar on the outskirts here.

Scholar Dayananda Borgohain, who inaugurated the gallery today, said the historical heritage of Sivasagar needs to be preserved and steps taken to attract more visitors. "We have urged the Assam government to take steps for protection and conservation of Sivasagar's historical heritage. The government has made provisions in the budget for maintaining the historic monuments," he said.

Golaghar is situated near Talatal Ghar (the royal palace) in Rangpur, the capital of the Ahom kingdom.

The gallery displays different weapons, arms, artillery, armour worn by kings and soldiers, dresses, the process of making gunpowder, the military and the navy of Ahoms.

Golaghar, a protected monument under Archaeological Survey of India (ASI), has been renovated to house the gallery.

ASI superintending archaeologist Milan Kumar Chauley said efforts have been made to conduct a scientific study of the Ahom era. "We have carried out studies of the historic monuments and come up with several interesting conclusions, which are quite different from what people perceive," he said.

He said brochures have been printed for visitors. "We have 19 booths in the gallery, of which one depicts the Ahoms' gunpowder-making process. The Ahoms started making gunpowder in the 14th century when the French procured gunpowder from outside," he said.

The Golaghar in Joysagar is a rectangular brick hut with two-layered roof. A porch adjoining the house is similar in style but smaller in height and width. The entire structure is 22.8 metres long, 11.7 metres wide and 2.15 metres thick. At the front and back, circular holes with terracotta pipes along with multiple square openings provide ventilation. The storehouse of explosives was built during the reign of Chakradhwaj Singha (1663-1669AD).