Polling to the Agartala, Town Bardowali, Surma and Jubarajnagar seats is underway in 221 booths since 7 AM, and it will continue till 5 PM 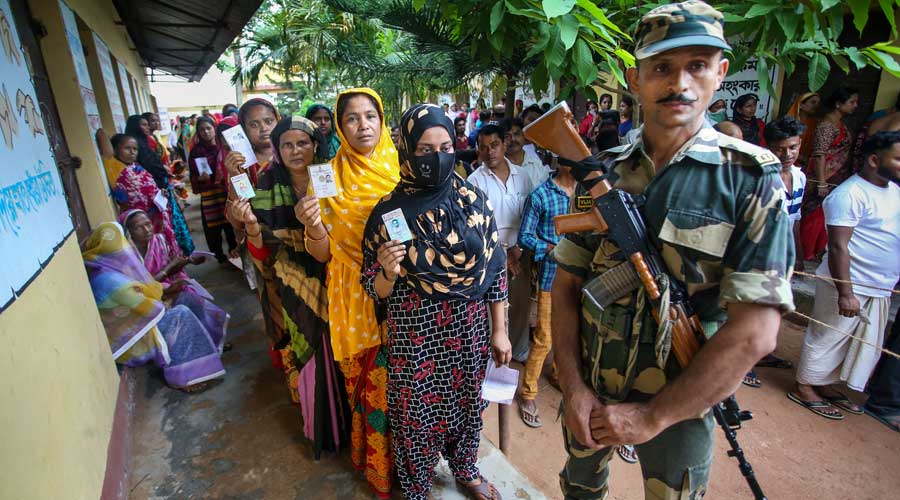 A security person stands guard as people wait in a queue at a polling station to cast their votes for Assembly by-elections in Agartala.
PTI Photo
Our Bureau, PTI   |   Agartala   |   Published 23.06.22, 03:33 PM

Around 51.77 per cent of 1.89 lakh voters exercised their franchise till 1 PM in by-polls to four assembly constituencies in Tripura on Thursday, election officials said.

Polling to the Agartala, Town Bardowali, Surma and Jubarajnagar seats is underway in 221 booths since 7 AM, and it will continue till 5 PM.

An unidentified person stabbed off-duty police constable Samir Saha in the stomach with a sharp object while he was going with his family to cast votes in Kunjaban area in Agartala constituency, a police officer said.

Saha, who is posted at Gandacherra in Dhalai district, has been admitted to a hospital and his condition is stated to be stable, he said.

"The candidate is unhurt but his vehicle was vandalised by miscreants," Dhalai Superintendent of Police Ramesh Yadav told PTI.

"They have been making one accusation after another. Democracy has been strengthened in Tripura with the administration and ECI discharging their duties properly," he said.

Saha also exuded "100 per cent confidence" that the BJP will sweep all the four seats.

"I am 100 per cent sure that BJP will win all the four seats based on the good work done by Prime Minister Narendra Modi and my predecessor Biplab Kumar Deb for the welfare of the people," he told reporters after casting his vote.

Polling has so far been peaceful in the seat where the chief minister is contesting against Asish Saha of Congress.

Congress candidate for Agartala constituency, Sudip Roy Barman, alleged that several voters were not allowed to cast their votes.

"Several voters have been prevented by goons from casting their votes. This happens when a government loses faith in the people and starts depending on criminals," he said.

Roy Barman, who has won the Agartala seat for five terms, alleged that his polling agents were prevented from entering 8-10 booths.

BJP chief spokesperson Subrata Chakraborty, however, said that polling in all the four seats is progressing in a free, fair and peaceful manner.

"Voters are happy that they could cast their votes without any trouble. Our chief minister's promised to create an atmosphere conducive for free and fair elections and it has been demonstrated on the ground," he said.

A total of 25 companies of central forces, apart from Tripura State Rifles (TSR), have been deployed to ensure peaceful polling.

As many as 1,89,032 voters are eligible to exercise their franchise to decide the electoral fate of 25 candidates in the fray.

The by-elections in Agartala and Town Bardowali constituencies were necessitated after Sudip Roy Barman and Asish Saha quit as BJP MLAs and joined the Congress in February.

Trinamool Congress and Left Front have fielded candidates in all the four seats. The votes will be counted on June 26.