The TMC MP said if a parliamentarian is not safe in this state, people are definitely more vulnerable to attacks 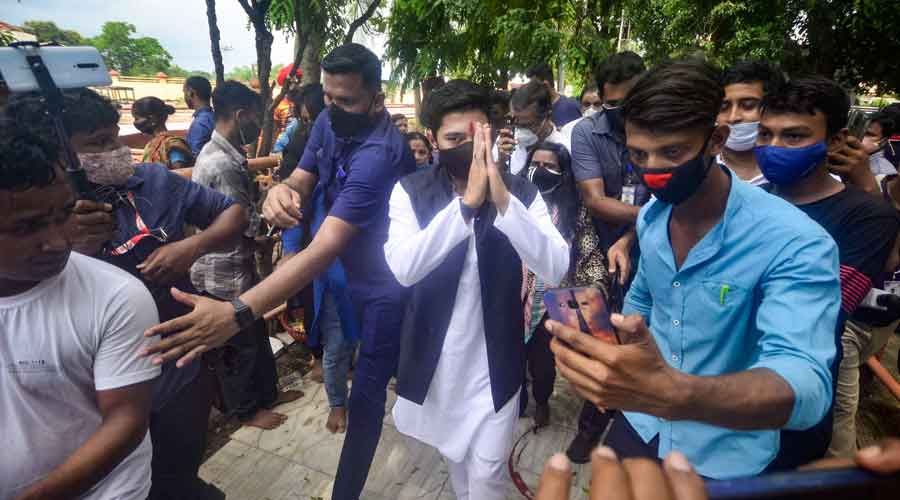 TMC MP Abhishek Banerjee during his visit to Tripureshwari temple in Udaipur on Monday.
PTI photo
Our Bureau And Agencies   |   Agartala   |   Published 02.08.21, 11:07 PM

Trinamul Congress national general secretary Abhishek Banerjee, who was in Tripura on a day's visit, asserted on Monday that his party would end the misrule of the BJP and form government in the state in 2023.

The TMC MP, who faced fierce protests by BJP workers on his way to Tripureswari temple earlier in the day, said if a parliamentarian is not safe in this state, people are definitely more vulnerable to attacks.

“Democracy is withering in Tripura, there is no attempt to generate employment for the youth, law and order has completely collapsed... We would wil here to restore democracy and deliver good governance as we did in West Bengal,” Banerjee told a press meet here.

The TMC, having registered a resounding victory in West Bengal polls, is trying to expand its base in other states, including Tripura, ahead of the 2024 Lok Sabha elections.

“If a convoy of an MP is attacked in this matter, one can clearly understand that common people have no security in the state. I would like to tell the people of Tripura that more they increase their attacks, stronger the TMC would become. We would not leave any stone unturned to topple this anti-people government,” he said.

Assembly polls in Tripura are slated to be held in the first half of 2023.

Banerjee, who is also the nephew of West Bengal Chief Minister Mamata Banerjee, further said that he would return to Tripura after a fortnight and announce the formation of a state committee of his party

His visit comes days after a controversy had erupted in the state over “detention” of poll strategist Prashant Kishor's I-PAC team in an Agartala hotel room by the police, citing Covid-19 restrictions.

The incident prompted back-to-back visits by TMC leaders, including West Bengal ministers Bratya Basu and Malay Ghatak and TMC MP Derek O'Brien, who decried the “illegal detention of young boys and girls” of a professional firm.

Criticising Deb over the deterioration in the law and order situation, the TMC MP said the central government “runs him with a remote control”.

He claimed that many MLAs from Tripura have contacted the TMC and met the party's leadership in Kolkata, expressing their willingness to join the camp.

The parliamentarian, nevertheless, clarified that his party does not want to break away legislators and disrupt the functioning of the present BJP government

He appealed to all anti-BJP parties to join hands with the TMC and said, “Anyone outfit can come join hands with us and revive democracy in Tripura. We shall put up a united fight and form the next government here.”

However, when asked if the TMC would consider forging an alliance with opposition CPI(M) here, Banerjee said there was no question of stitching a coalition with the Left party.

“The spontaneous response that I have received from people on the way to Tripureswari temple indicates that they are looking for a platform against the BJP. Mark my words, the TMC will form the next government in Tripura for sure,” Banerjee asserted.

Lashing out at the Biplab Deb dispensation over the “attack” on his convoy, he said, “I am overwhelmed by the reception that I was accorded on my arrival here,” he pointed out.

Agitators, allegedly bearing allegiance to the saffron party, were seen trying to stop Banerjee in places when he was heading towards the temple in the morning. Many were also heard raising Go back Abhishek' slogans

Banerjee, taking to Twitter, shared a video of the incident and said, “Democracy in Tripura under @BJP4India rule! Well done @BjpBiplab for taking the state to new heights.”

Democracy in Tripura under @BJP4India rule!

Rebutting allegations that his party members attacked the convoy of the TMC MP, BJP spokesperson Nabendu Bhattacharya said the saffron camp workers were simply staging a protest over the ongoing political violence in West Bengal.