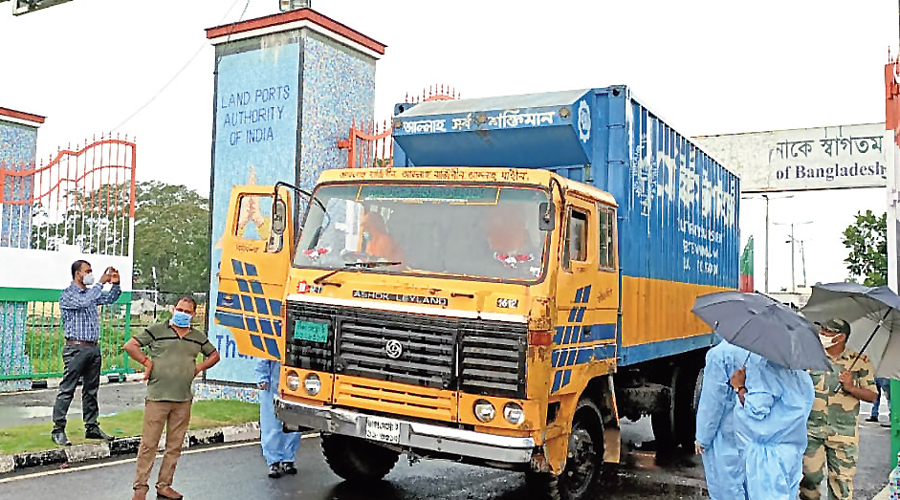 Union Minister Pratima Bhoumik on Tuesday received a consignment in Tripura's Sepahijala district as part of a trial run for cargo movement from Calcutta to northeast via Bangladesh's Mongla port.

The shipment arrived at Srimantapur land customs station in the district and would be transported to Assam's Silchar from there.

A shipment reached Srimantapur LCS from Bangladesh today. It will be transported to Silchar later.

This is an experimental cargo movement from Calcutta to Srimantapur via Mongla Port-Bibir Bazaar in Bangladesh. It has created a new scope for transportation of consignments. Once the system is regularised, several items could be transported to the northeastern states through Bangladesh," said Bhoumik, the union minister of state for social justice and empowerment.

Tripura's Industries and Commerce Minister Santana Chakma and Indian Assistant High Commissioner at Chittagong Dr Rajiv Ranjan were present at Srimangapur LCS for the arrival of the shipment.

The cargo movement from West Bengal's Kolkata port to the northeastern states of the country through the India-Bangladesh Protocol route will not only reduce transit cost and time but also help develop the economy.

An agreement and standard operating procedure on the use of Chittagong and Mongla ports for the movement of goods to and from India have been signed by the two countries.

A consignment was successfully transported from Chittagong port to Akhura (Agartala) Integrated Check Post in 2020. This time, another shipment came from Kolkata to Srimantapur via Mongla port (Bangladesh) on an experimental basis and the process was smooth," Land Ports Authority of India, Agartala manager Debasish Nandi told PTI.

He said this was a trial run undertaken before regularising the cargo movement on the route.

"The shipping ministry will prepare a final report on today's goods movement and discuss with its Bangladesh counterpart to regularise transportation of shipments for the northeast," he added.