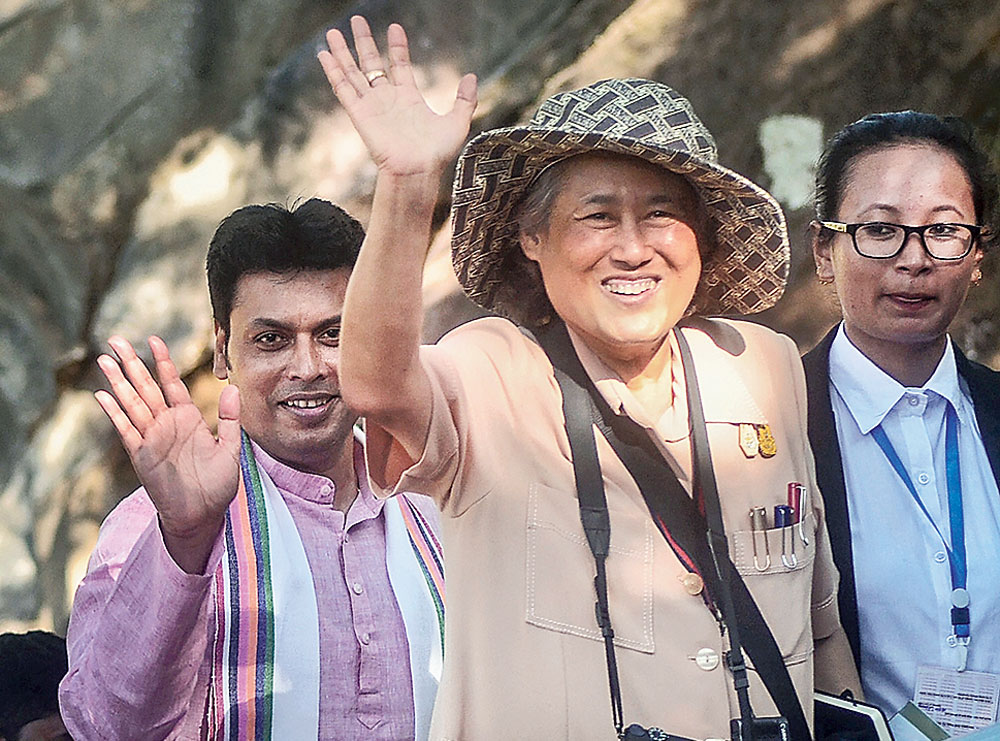 The Princess came on an air force helicopter to a helipad near the site.

Chief minister Biplab Kumar Deb and members of a delegation from Thailand accompanied her during the visit.

She was received by officials of the district administration and two MLAs, Bhagaban Das and Sudhangshu Das, and schoolchildren who lined the roads and waved flags of India and Thailand to welcome her.

“I should have come here earlier. I don’t know why I did not visit this place before. It is a very beautiful and a unique place,” the chief minister quoted the Princess as saying.

Unakoti means one less than a crore.

It is an eighth century rock-cut archaeological site at Raghunandan hills of Unakoti district in Tripura, around 178km from here.

“We are working very hard to develop tourism in our state. The industry got a boost with the visit of the Thai Princess,” Deb said.

Earlier on November 15, the chief minister convened a high-level meeting at the state secretariat in the presence of the chief secretary L.K. Gupta, director-general of police Akhil Kumar Sukla and other senior officials.

The meeting discussed the preparations for the Thai Princess’s visit.

“She also expressed her willingness to see other tourist spots like Chhabimura and Neermahal,” Deb told reporters.

Chhabimura has 11th century rock carvings in Gomati district, about 90km from here, and can be approached by boat only.

The palace is situated in the middle of Rudrasagar lake and built by the king of Tripura Bir Bikram Kishore Manikya Bahadur, around 100 years ago.

The princess left for Imphal on Tuesday evening.