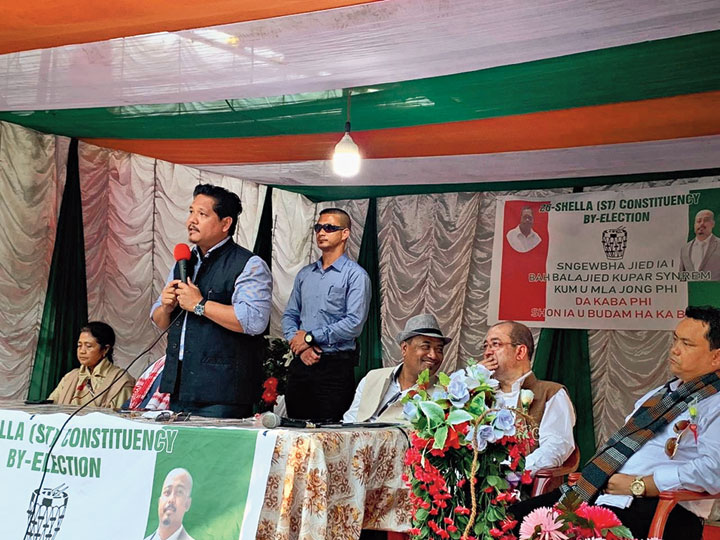 Campaign for the bypoll to Shella Assembly constituency in Meghalaya’s East Khasi Hills ended on Saturday evening, with six candidates in the fray to be the successor to late Donkupar Roy, who represented the seat for seven consecutive terms since 1988.

Voting will be held in 58 booths on Monday and counting on Thursday. The bypoll was necessitated following Roy’s demise on July 28. He was also the Assembly Speaker and president of United Democratic Party (UDP).

On Saturday, chief minister Conrad K. Sangma campaigned at Shella market for the UDP candidate in the presence of its president, Metbah Lyngdoh, who is now the Speaker, and other ministers.

Kharpuri held her last and final campaign at Sohkhmi village, while Wanswet campaigned with party ministers and leaders at Nongjri village.

The BJP conducted its campaign at Ishamati village with BJP legislator Sanbor Shullai urging the people to vote for the party, which is ruling at the Centre.

The NPP chose to support the UDP though the PDF and the BJP are also partners of the NPP-led state government.

Chief electoral officer F.R. Kharkongor said no seizure of money was made and the campaigning ended with no reports of poll code violation.

There are 29,763 electorates, including 14,809 men and 14,954 women. Of these, 127 are persons with disabilities and seven service voters. Dalia polling station has the highest number of voters (961), while Laitduh has the least (118). The first five voters who exercise their franchise will be awarded green medals.

A three-tier security arrangement will be in place for conducting the bypoll, with one company of Central Armed Police Force deployed besides state police, static surveillance teams (SSTs) and flying squads.

Six polling parties left on Saturday as their booths are not accessible by road. The booth at Nongriat village can be reached by crossing a double-decker living root bridge while the one at Kalatek can be accessed only by boat.