Another key proposal was to enhance the monthly financial assistance for women under the Orunodoi scheme, which was a game-changer in the Assembly elections 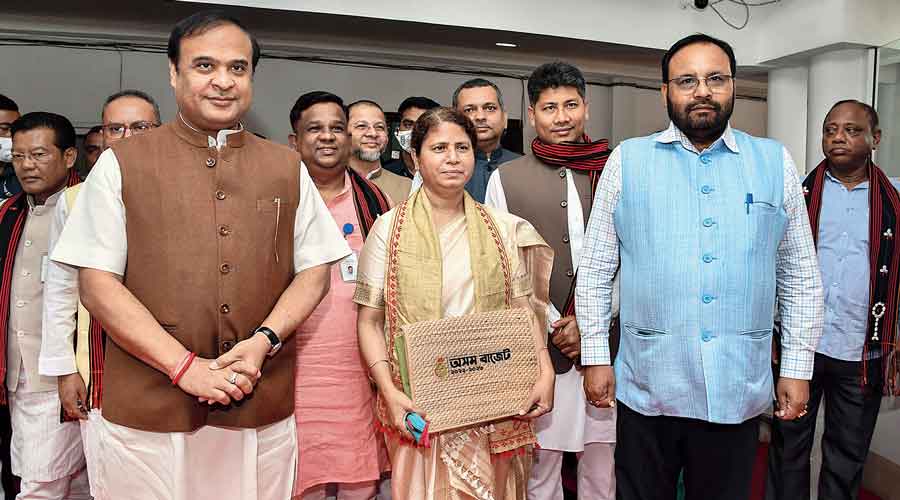 The BJP-led Assam government on Wednesday asserted that the process to provide one lakh jobs to the youths of the state had already begun.

Presenting a “growth-oriented” budget for 2022-23 covering all sections of the society, finance minister Ajanta Neog said the Covid-19 crisis and subsequent lockdowns had significantly affected employment opportunities for the younger generation in the state.

“To address this issue, our government remains committed to provide one lakh jobs to the youths,” she said.

Providing one lakh jobs within a year was one of the key pre-poll promises of the ruling alliance comprising the BJP, Asom Gana Parishad (AGP) and the United People's Party Liberal (UPPL) before the 2021 Assembly elections.

To expedite the recruitment process, the government has enacted the “Assam Direct Recruitment Commissions for Analogous Posts in Class III and Class IV Act, 2021”. Neog said two recruitment commissions had also been set up to conduct this process expeditiously in a transparent manner.

“I have been given to understand that the commission will be able to advertise posts before March 31,” Neog said, providing details of 50,930 posts under various departments that are “already in the process of recruitment”.

She said the government had already filled around 1,157 posts and recruitments to 84,244 posts were in process.

“The remaining (14,599) posts will also be filled up soon. Besides this, we will undertake recruitment in our Missions and Societies such as National Health Mission, Sarba Siksha Mission,” Neog said.

Neog said the budget was a vision document of the alliance government for the next five years. “Now at the end of the financial year, we will introspect how far we have stridden ahead. We are determined not to stop our journey before attaining our goal.”

Another key proposal was to enhance the monthly financial assistance for women under the Orunodoi scheme, which was also a game-changer in the 2021 Assembly polls.

The scheme was launched in 2020 with a monthly transfer of Rs 830 per women beneficiary. At present, the government directly transfers Rs 1,000 to the accounts of around 20 lakh beneficiaries on the 10th of every month.

“This year, I propose to bring six lakh additional beneficiaries under the scheme. This time, I want to provide additional amount of Rs 250 as subsidy for 50 units of electricity directly being credited into the account of the poor. Thus, each beneficiary will be eligible to get Rs 1,250 per month in the next financial year,” Neog said.

Chief minister Himanta Biswa Sarma said the “growth-oriented and people-friendly” budget, which had taken into account every stakeholder’s interest, would herald a new era of progress.

“The budget allocation to tea tourism wherein the tea estates would be provided capital infrastructure support for building guest houses/tourist facilities and also undertake non-tea cultivation activities such as agro forestry and solar power projects to augment their income is appreciated. An amount of up to Rs 2 crore each to 50 selected gardens would be provided by the government. Hope the gardens reap the benefit of the schemes,” Deka added.