One held for ‘deliberate’ breach of Silchar dyke 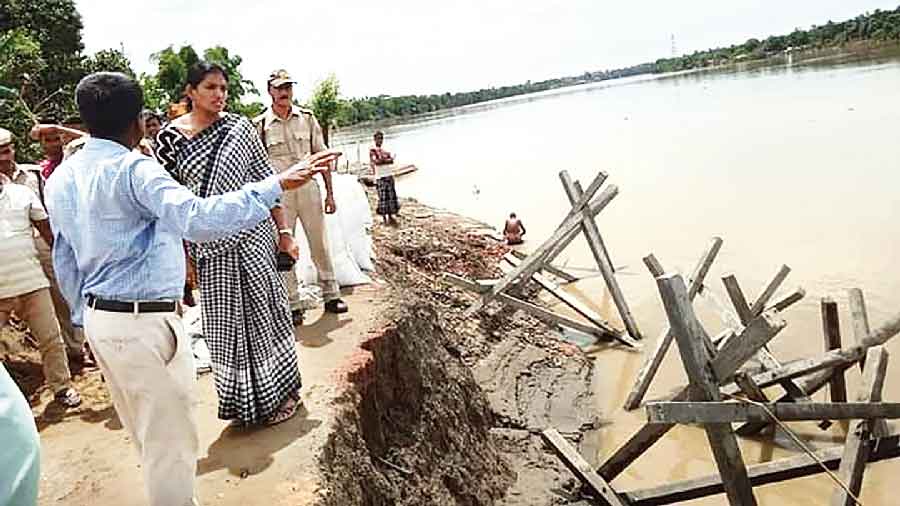 Restoration of the breached Bethukandi dyke, which provides protection to Silchar town from the Barak river, in progress on Saturday
The Telegraph Picture
Umanand Jaiswal   |   Guwahati   |   Published 03.07.22, 12:59 AM

Police on Friday night made its first arrest in connection with the “deliberate” breach of the dyke that provides protection to Silchar town from the Barak river in Cachar district of Assam.

The breach, coupled with heavy rainfall, flooded Silchar on June 19, disrupting normal life for the 13th day on Friday in the second biggest town in Assam after Guwahati.

An official said on Saturday that the police arrested Kabul Khan, 35, one among the six suspects identified for their alleged involvement in breach of the Bethukandi dyke. The dyke was damaged in mid-May during the first wave of flood.

Officials at the site
The Telegraph Picture

Khan hails from the same locality. “The arrest was made last night. Details of the sections and the case will be shared soon. It was deliberate act. There will be more arrests soon,” the official said.

Assam chief minister Himanta Biswa Sarma, who had visited Silchar on Friday, his third visit in 10 days to review the flood relief operations, said the dyke breach case would be handled by the police’s criminal investigation department.

The official said the breach was around 30 metres and work for the restoration of the dyke has started, but questions are being raised why the administration took so long to start the restoration work.

Silchar town is around 1km from the dyke. A section has blamed the administration for not taking steps to plug the breach.

There is still water-logging in “around 20 per cent” of the town even 13 days after water first entered the town.

Altogether 32 pumps are being used to clear water-logged areas.

Till Friday, 173 people have lost their lives in flood and landslides in the state since April 6, of which 131 since June 14 when incessant rainfall started lashing the state. Over 29 lakh in 30 districts remain affected.

During his second visit on June 27 to review the flood situation, the chief minister had said the situation in Silchar town aggravated because it was “man-made”; people did not take the advisory issued by the district disaster management authority “seriously” and those involved in the breach will have to face the law.

On June 19, the Cachar DDMA had issued an advisory in view of the incessant rain and the Barak river flowing much above danger level. It also mentioned about the damage to the dyke at Bethukandi that could not be restored and through which water from the Barak was entering the town. The inflow would affect low-lying areas, it had said, advising people to immediately shift to safer areas.

With water receding, Cachar district administration is trying to check the outbreak of disease.

Extensive mobile announcement is being carried out in all the wards of Silchar Municipal Board urging people to maintain cleanliness and hygiene, an official said. Assessment of flood-damaged houses in different circles of Cachar district is going on, an official said.