On January 24, the high court had granted interim bail to Daimari to facilitate his joining the peace talks with the Centre 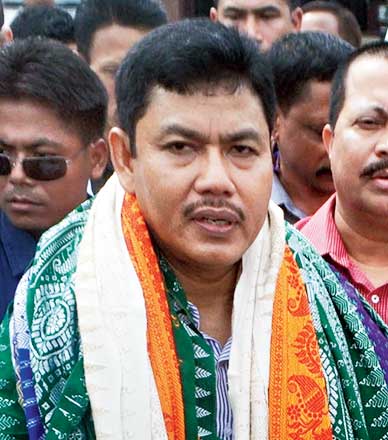 On January 24, the high court had granted interim bail to Daimari to facilitate his joining the peace talks with the Centre. After getting bail, Daimary participated in the dialogue with the Centre and became a signatory to the Bodo Peace Accord on January 27.

Subsequently, according to the accord, altogether 1,615 cadres of four NDFB factions, led by Daimari, Govinda Basumatary, Dhirendra Boro and B. Saoraigwra laid down arms before Assam chief minister Sarbananda Sonowal on January 30. They also laid down around 178 sophisticated weapons, including AK-series, sniper, Heckler & Koch and SLR rifles, ammunition and explosives.

Last year, Daimari was sentenced to rigorous life imprisonment in connection with the serial blasts case in which over 90 people were killed and 400 injured in a series of explosions at Guwahati, Kokrajhar, Bongaigaon and Barpeta Road on October 30, 2008. The CBI investigated the case.

CBI counsel S.C. Kayal said, “Daimari’s side prayed for an extension of his interim bail, but the court asked him to surrender first according to the previous bail term. The court said it will take up his bail extension hearing on February 25.”

Daimari’s advocate Manas Sarania had earlier said, “He will comply with the court order and do the needful.”

The court order came at a time when Daimari and leaders of three other NDFB factions were reportedly planning to enter politics ahead of the Bodoland Territorial Council (BTC) polls in April.