It is a good decision taken unanimously by everybody, says Nirmala Sitharaman 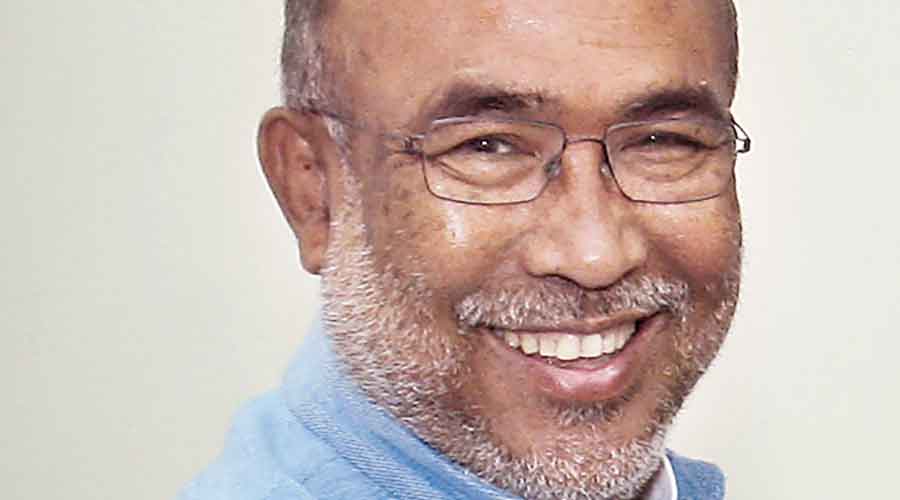 N. Biren Singh will continue as the chief minister of Manipur for a second straight term.

Union finance minister Nirmala Sitharaman made the announcement about Singh being elected as the legislature party leader after a two-hour meeting with newly-elected BJP MLAs at the party headquarters in Imphal on Sunday afternoon.

“It is a good decision taken unanimously by everybody. It will ensure a stable and responsible government,” she said.

Soon after the announcement, she accompanied Singh to the Raj Bhavan to stake claim to form the next government.

A Raj Bhavan release said governor La Ganesan has invited the legislative party leader Singh to indicate the date and time of forming the ministry.

The 1961-born Singh is five-time MLA from the Heingang Assembly constituency. The BJP retained power by winning a majority for the first time — 32 of the 60 seats in the recently-held Assembly polls under his leadership.

“There were several factors which went in favour of the tried and tested Singh.

He not only led from the front but also ensured that arch rivals Congress’s freefall continues in the state. He was also seen as somebody who could bridge the hill-valley divide in the state,” a party insider said.

Sitharaman and Union law minister Kiren Rijiju met the elected MLAs individually to know their mind before Singh’s name was officially declared, ending days of speculations after the name of  Thongam Biswajit Singh, minister in the previous government, started doing the rounds as a possible replacement.

The two contenders were on Saturday summoned by the party leadership for talks on government formation and new legislative party leader, further fuelling speculations.

The duo held a meeting with party president J.P. Nadda, Union home minister Amit Shah and general secretary (organisation) B.L. Santhosh on Saturday night and returned to Imphal with Sitharaman and Rijiju and other central leaders on Sunday morning.

Biswajit was also a contender in 2017 when the BJP came to power for the first time in the state but the “tried and tested” Singh eventually won the race, party insiders said, adding he will also get a “good” post.

The BJP parliamentary board last Monday appointed Sitharaman and Rijiju as the observer and co-observer for the election of the legislative party leader.

M. Asnikumar Singh, senior spokesperson, the BJP, Manipur Pradesh told The Telegraph: “We the karyartas are eagerly looking forward to working under the leadership of Biren ji and guidance and vision of Narendra Modi ji for a peaceful, prosperous and shining Manipur. The game-changing development, peace and progress brought by the BJP-led government in the past five years will enter a new phase.”

The swearing in will take place in the couple of days, he said.

Soon after the visit to Raj Bhavan with senior party leaders, Singh tweeted that he was “immensely grateful” to the central leadership for entrusting him to “serve” as the leader of the legislative party and every party worker for their tireless efforts for the party’s win.

Fulfilling the aspirations of the people of Manipur under PM Narendra Modi Ji’s mantra of Sabka Sath Sabka Vikas Sabka Viswas aur Sabka Prayas will be our top priority. pic.twitter.com/E5JFKoBYEx

The Raj Bhavan release said the Janata Dal, KPA and one Independent have extended unconditional support to the BJP.

In 2017, the BJP, the NPP and the NPF had won 21, 4 and 4 seats respectively while the Congress 28. However, this time the principal Opposition party was pushed to the fifth spot.