Participants of the sit-in held at the U Mot Kiang Nangbah, near the Shillong civil hospital, also took part in a candlelight vigil expressing solidarity with the families of the victims 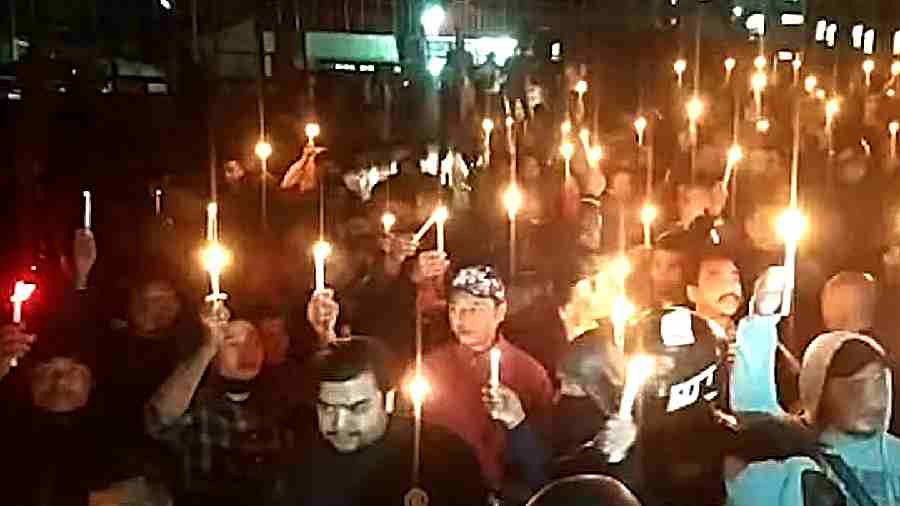 The candlelight vigil in Shillong organised by five pressure groups on Thursday evening in solidarity with families of the Mukhrow firing victims
Umanand Jaiswal   |   Guwahati   |   Published 25.11.22, 03:16 AM

Five leading pressure groups of Meghalaya on Thursday held a sit-in in Shillong on Thursday seeking the “arrest of all those” responsible for the death of five persons from the state in firing by Assam police personnel at “Mukroh village in West Jaintia Hills district” along the inter-state border on Tuesday morning.

The Assam government, however, claimed the firing incident was triggered by a “clash” between the residents of Meghalaya and state forest protection force personnel over a seized truck “smuggling out illegal timber” from Mukhrow village in Assam’s West Karbi Anglong district.

One Assam forest guard also died in the firing. Participants of the sit-in held at the U Mot Kiang Nangbah, near the Shillong civil hospital, also took part in a candlelight vigil expressing solidarity with the families of the victims and raised slogans against the Assam Police.

A traffic booth was vandalised and a city bus was attacked in Shillong on Thursday evening, reflecting the overall tension in the state over the firing incident which Meghalaya chief minister Conrad Sangma had attributed to “unprovoked” firing inside the state’s territory.

Both states have had a border dispute since Meghalaya was carved out of Assam in 1972. Both share an 884.9km inter-state  border. Police of both states have registered FIR in connection with the firing case.

FKJGP vice-president Kitboklang Nongphlang told The Telegraph that they have demanded that the Meghalaya government take all steps to arrest those involved in the Mukhrow firing incident and set up a police outpost or a police station in the Mukhrow area for the security of people living there.

When his reaction was sought to the Assam government’s steps against police and forest personnel in wake of the incident, Nongphlang said, “We have nothing to say about the steps taken by the Assam government. “We want the Meghalaya government to act against those involved in the incident because it took place inside Meghalaya’s territory. We have faced harassment at the hands of the Assam police in the past also.”

The Jaintia Students Union submitted a memorandum to Sangma on Wednesday demanding a police outpost at Mukhrow during Sangma’s visit to the village to meet the bereaved families.

Union home minister Amit Shah on Thursday evening “assured” a delegation of cabinet ministers, led by Meghalaya chief minister Sangma, of getting the Mukroh firing probed by a central agency.

An order would be issued any moment, Sangma said after the cabinet delegation’s meeting with Shah in New Delhi.

The cabinet team thanked Shah for his “positive response” to their demand of getting the incident probed by a central agency such as the NIA or the CBI.