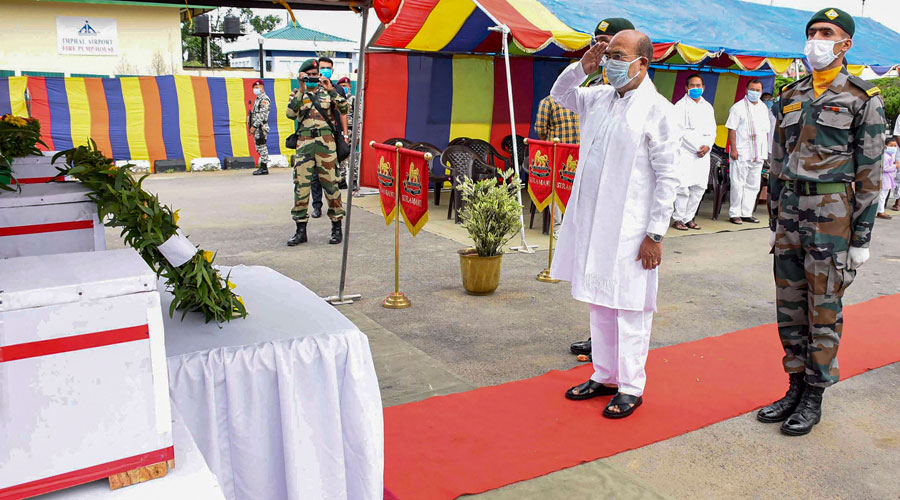 Manipur chief minister N. Biren Singh on Friday said there was “no” place for violence in a democratic country such as India and those involved in Wednesday’s militant attack on Assam Rifles’ foot patrol team would be “definitely hunted down”.

At least three Assam Rifles personnel were killed and six injured in the ambush carried out by militants at Khongtal village under Chakpikarong police station in Chandel district. The militants had sneaked in from neighbouring Myanmar, which shares a 398km border with Manipur.

Strongly condemning the ambush, the chief minister asserted that the government would not remain a silent spectator and the perpetrators would be hunted down.

He also appealed to the armed groups to shun hostilities and come forward for a political solution to their demands.

A statement issued by the defence PRO said the “sacrifice” of the “fallen soldiers” hailing from Manipur, Nagaland and Assam truly represented the idea of unity in diversity — the strength of the nation and the Assam Rifles.

The statement said the Assam Rifles remained committed to the security of the nation and would continue to uphold its ideals in its pursuit of defeating “secessionist forces” and ensuring the welfare of the families of the fallen soldiers.

The outfits said they had carried out the “military offensive” as part of their “independence” struggle against “Indian Occupation Forces on July 29 at Sajik Tampak area of Manipur”.