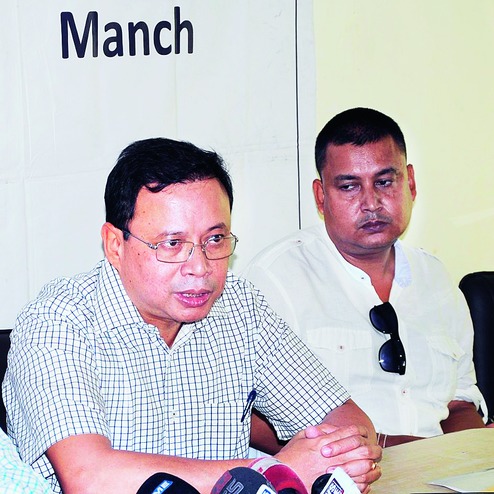 Guwahati, April 29: Prabajan Virodhi Manch reached out to family members of the martyrs of the Assam Agitation (1979-85) to support the cut-off date for detection of foreigners in Assam as 1951 instead of the Assam Accord's cut-off date of March 24, 1971.

The organisation's initiative came weeks before the Supreme Court hearing of a petition demanding the same by student organisation Assam Sanmilita Mahasangha on May 11.

"We have reached out to those who have lost their loved ones fighting against illegal immigration in Assam and they want 1951 to be the cut-off date. People have laid down their lives for an Assam free of foreigners and during the agitation it was decided the cut-off date for detection will be 1951 and not 1971. We want that to be followed," Upamanyu Hazarika, the convener of the organisation, said here today.

The organisation also released a video in which three persons from three martyr families are seen demanding the same.

The agitation, that lasted for six years and has seen 854 students laying down their lives, culminated with the signing of the Assam Accord on August 15, 1985, and creation of the Asom Gana Parishad that made Prafulla Mahanta the chief minister in December the same year.

"The agitation has become a launch pad for leaders to enter politics. The previous chief minister (Mahanta) did not live up to his promises. Present chief minister Sarbananda Sonowal (who was also an AASU leader during the agitation and became its president post-agitation) is also not doing anything to solve the immigration problem," Hazarika said.

The Muslim population in 1985, when Mahanta took charge, was approximately 60 lakh, of which six to seven per cent were indigenous Assamese Muslims. The rest were immigrant Muslims, including those who had entered illegally. According to the 2011 census, the figure had swollen to 1.24 crore, of which indigenous Muslims would be about 10 lakh.

"Out of that, less than 2,500 Bangladeshis have been deported so far. The government has left several loopholes in the legacy data that one needs to provide to prove their existence in the state before 1971, using which the illegal immigrants are getting themselves documented as Indian citizens," Hazarika said.