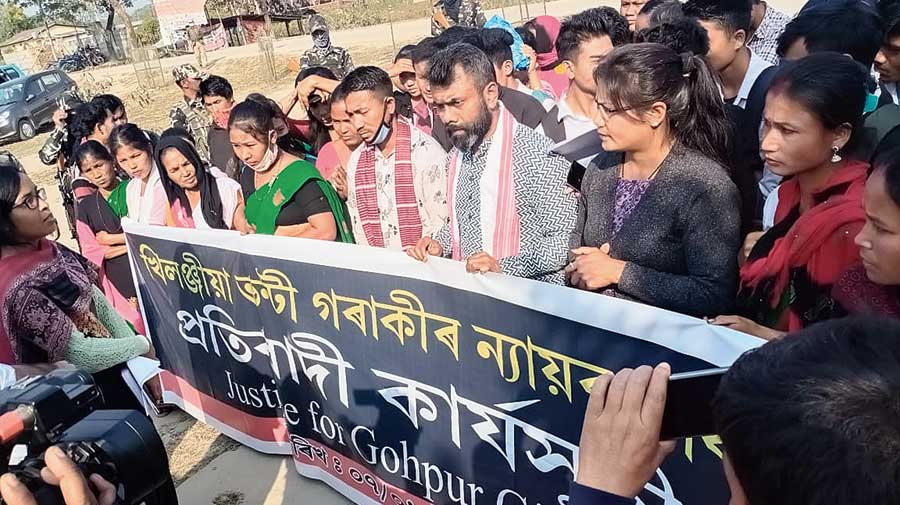 The protest in front of the SDO civil office in Gohpur seeking justice for the victim.
Telegraph picture
Umanand Jaiswal   |   Guwahati   |   Published 09.01.21, 02:18 AM

Over 50 protesters staged a dharna in front of the office of the subdivisional officer (civil) at Gohpur in Biswanath district of Assam on Thursday seeking “justice, security and compensation” to the family of an alleged kidnapping, gang rape and murder victim.

The 11-year-old victim, a class VIII student, was found hanging from a tree a day after she went missing on February 28 last year.

The protest was one of the several held since the incident took place, more so after all the nine accused, all of whom had appeared for their Class X final exams, were granted bail by the court, first in the rape and murder case and secondly in the case where they had allegedly threatened the victim’s family.

The protesters, mostly from the victim’s village, well-wishers and family members, were joined by senior Congress MLA Rupjyoti Kurmi. The MLA also submitted a three-page memorandum to the chief minister seeking protection for the girl’s family, immediate trial of the case, proper investigation, sending the juvenile accused to correctional homes, huge compensation for the family, protection of women in Gohpur and requesting that “don’t leave this victim family with no hope, no help”.

Those familiar with the case told The Telegraph that there has been no movement in the case, a reason why they are seeking its transfer to a fast-track court given the “heinous” nature and the age of the accused, who allegedly committed a crime usually carried out by “hardened criminals”. The post-mortem report said the victim died by strangulation, there were signs of “recent sexual intercourse” and that the girl had attained puberty.

A school teacher and a neighbour of the victim alleged the girl was kidnapped, drugged, gang-raped and murdered by the accused who allegedly tried to pass it off as suicide by hanging. The case has received media and social media attraction but nothing much has happened on the ground with the accused roaming free, those familiar with the case said. Two of the accused hail from the victim’s village while seven are from nearby villages. Locals also alleged there were lapses during investigation owing to which the accused secured bail.

“We want nothing but only justice for the family. Those guilty should be punished and those innocent among the accused should be set free. This can be achieved only through a speedy and fair trial, through a fast-track court. Security and compensation also has to be provided to the victim’s family who are poor. They even sold their cow to arrange money to fight the case. The government should also appoint a public prosecutor,” the school teacher said.

Sources in the Biswanath civil and police administration told this newspaper that a prayer was made to the police headquarters to transfer the case to a fast-track court in October and that the juvenile board has transferred the case of the four accused, who were found to be over 18 years, to be tried by the additional district and sessions judge. However, the trial has got stuck because four of the accused have challenged the order of the juvenile board. They also said that two cases have been registered, one involving the alleged gang rape and murder and another for allegedly threatening the family of the victim. Two chargesheets have also been filed, according to local police. A district official said that ex gratia is sanctioned by the government but they have prayed for compensation under Section 38 of the Protection of Children from Sexual Offences (Pocso) Act. 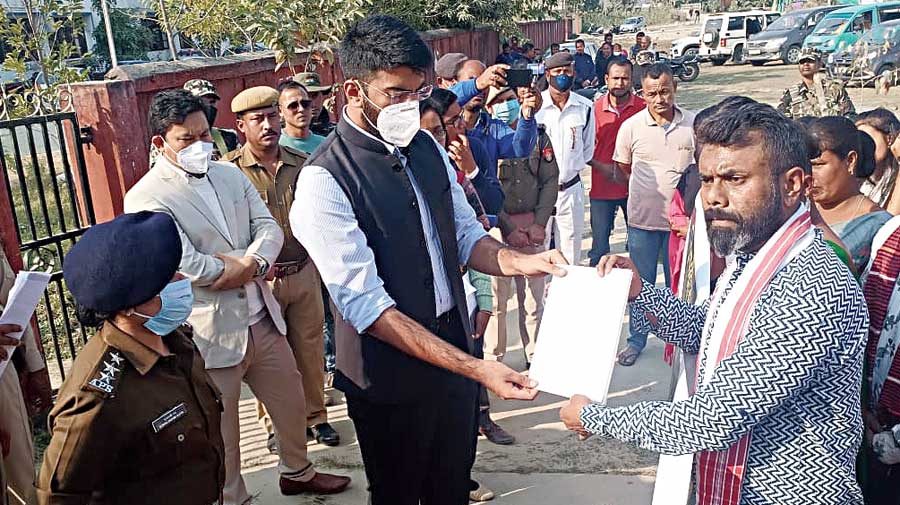 An official said they are doing everything within their power to provide relief to the victim’s family for what they are going through. “The protest on Thursday was peaceful. We have explained to them and to the honourable MLA what steps we are taking so that there is closure,” he said.

The official said they have provided permanent patta for three bighas of land belonging to the victim’s family besides allotting an additional bigha, a job card, a ration card and also adopted the village under the Jal Jeevan Mission.

“We are also providing electricity to the family through the Saubhagya scheme. We are trying to provide as much possible through government schemes. But the issue of ex gratia is not in our hand,” an official said.

Kurmi said providing government benefits to the family has got nothing to do with the case which should be fast-tracked. “Schemes would have reached the village anyway. The local administration/government should try to compensate the family financially and fast-track the case,” the Congress MLA said.

Delhi-based Shyamjyoti Saikia, a JNU research fellow who hails from a nearby village, told this newspaper that the administration should extend all possible help to fast-track the case so that the family gets justice and also hold a counselling session for the villagers because everyone is affected.

Saikia has been helping the victim’s family in whatever way possible just like the school teacher. “Counselling will help both girls and boys in the victim’s village to move on. Girls are afraid while the boys are bearing the brunt of what happened,” she said.