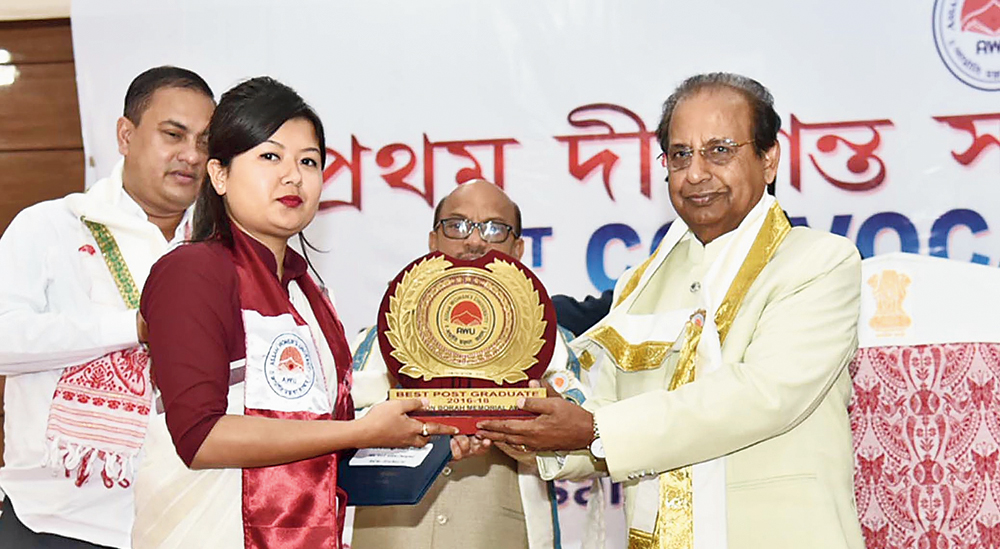 Assam governor Jagdish Mukhi congratulated all the students of Assam Women’s University (AWU) during its first convocation here on Tuesday.

Addressing the convocation, Mukhi, who is also the chancellor, said, “Keeping in mind the increasing participation of women in the economy, this university must concentrate on introducing skill-based and employment-oriented courses to nourish the young minds. I believe that without economic independence, women’s empowerment will be impossible.”

Earlier, vice-chancellor Malini Goswami, in her welcome address, said the university had constituted an academic council, an executive council and a research council and the first sitting of each of the councils was held in the last five months.

“The university has decided to start MPhil and PhD programme in selected subjects from the next academic session,” she said.

“Moreover, the university has been constantly working towards building its capacity and inclusion of different operational efficiencies in qualitative mode,” she added.

The four best post-graduate students were conferred a medal and a citation during the convocation.

Jorhat College organised a rally in the town on Tuesday to promote awareness on environment.

As a part of the rally, the students enacted street plays, performed songs and showcased paintings to raise environmental awareness among the people. Jorhat Jatiya Bidyalaya and School for the Deaf and Dumb also participated in the rally.