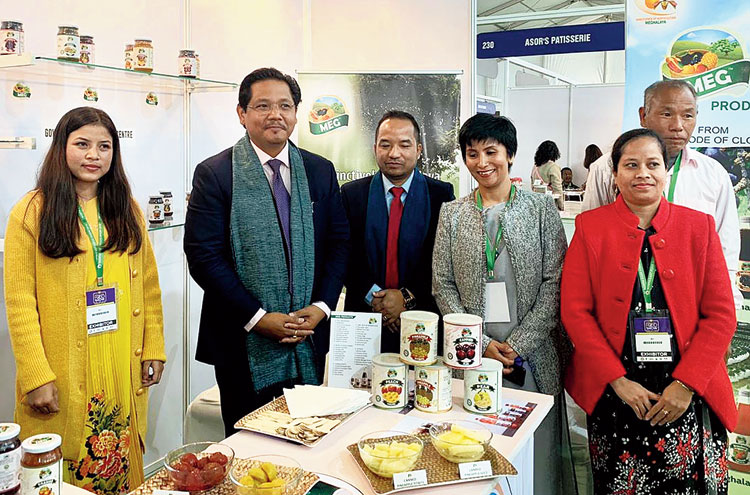 The first edition of the North East Food Show by Meghalaya and Salon International de l’Agrolimentaire (SIAL) Group, which started here on Wednesday, aims to bring the farmers of the region face to face with potential buyers.

“People sometimes do not know that the products they want to buy are available in the Northeast. This platform will allow all the stakeholders of the food industry to come under one platform,” chief minister Conrad Sangma told reporters.

He said the show was not only meant for the state but for the entire Northeast and neighbouring countries.

He said the event will cost Rs 3 crore to Rs 4 crore but a large part of the amount would be raised through sale of stalls at the show.

He said the government has also got help from the Centre, the ministry of micro, small and medium enterprises and food processing sector.

“So we are hopeful that we will be able to cover up the expenditure that we have incurred. There are more than 300 stalls,” Conrad said.

Earlier, Conrad spoke at the inaugural session of the three-day food festival.

Conrad said the government intends to make it an annual event.

“We are hopeful of making this the biggest food festival in the south-east Asian region,” he said.

A collaboration between the state government and Inter Ads Exhibitions Pvt Ltd, sole licensee of SIAL in India, the world’s largest food innovation network with over 50 years of global food innovation experience, the North East Food Show 2019 is a Northeast platform focused on creating a global platform to “inspire food business” for this part of the country.

During the three-day show, a series of conferences, workshops and demos will be held, culminating in the North East Chief Ministers’ Conclave on the last day. Key decision and policy makers of the Union and state governments and key industry representatives will attend the conclave.

A few tea companies also participated in the show showing variety of teas.