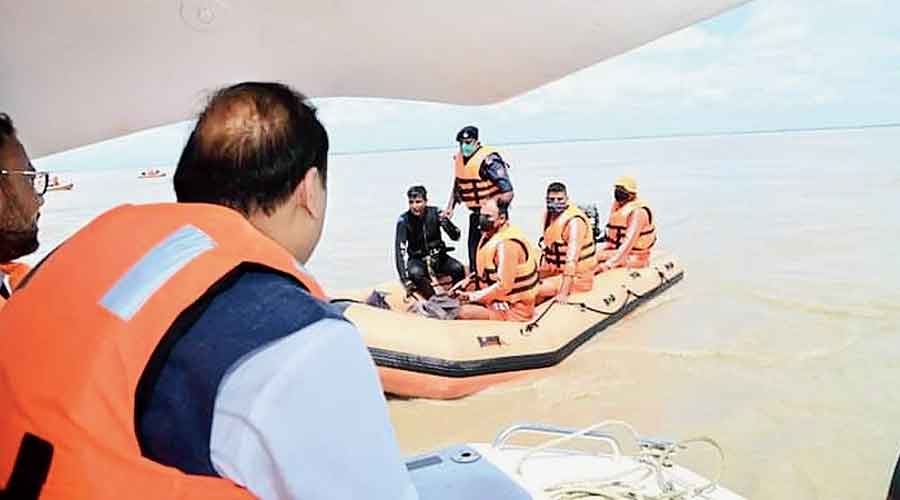 A ferry mishap in Assam on Wednesday has not only sparked protests in the island district of Majuli but also put the spotlight back on the “unfulfilled promise” made by Prime Minister Narendra Modi in 2016 to build a bridge over the Brahmaputra connecting it with mainland Jorhat.

The foundation of the bridge was laid on February 27, 2016, by Union minister Nitin Gadkari and then again by Modi on February 18, 2021 — both before the Assembly polls in the state won by the BJP and its allies.

The mishap was the result of a collision between two ferries about 50 metres from the bank of the Brahmaputra at Neematighat in Jorhat district on Wednesday afternoon.

A ferry bound for Kamal¬abarighat, 15km from Neema¬tighat, sank after being hit by another ferry coming from the opposite direction, leading to the death of a college teacher, out of the 92 people on board. Two persons, including a doc¬tor, are still missing.

With the mishap once aga¬in exposing the lapses in the operation of ferry services, there is considerable anger, resentment and pain at the loss of lives, more so in Majuli district, the first island district and the seat of Vaishnavite culture.

A government statement issued on February 18 this year had said a 6.8km twolane bridge was being constructed at a cost of Rs 925.47 crore from Kamalabari to Neematighat to provide easy and alltime ac¬cess to the people living in Ma¬juli town with the rest of Assam to “meet their health, education and other daytoday development activities”.

The All Assam Students' Union (AASU) and the Asom Jatiyatabadi Yuba Chatra Pa¬rishad (AJYCP) staged a “bl¬ack day” across Majuli in pr¬otest against what their lead¬ers said was an avoidable tr¬agedy had the administration taken steps to streamline the ferry services and built the bridge which they had been demanding for decades.

At Garmur in Majuli, a gr¬oup of students staged a pro¬test with similar demands, ev¬en gheraoing state minister Bimal Borah seeking answers for the mishap. Police had to resort to lathicharge to disper¬se the students and local peo¬ple, a move which has been re¬sented.

Ajit Hazarika, president, Majuli district unit of AASU, has said they neither have a bridge nor they have a safe and reliable ferry service, a lifeline for about two lakh is¬land residents.

During the 2016 prepoll rally, Modi had asserted he would do in five years what the Congress could not do in 60 years. “One bridge is requ¬ired... what has not happened in 60 years, I will do in five years. Give me an opportunity to serve...,” Modi had said.

But construction has not yet started, Hazarika said.

“Foundation stone has been laid twice in five years. The company which has got the contract has not been able to fence the work site till now. The delay is very unfortunate because the commitment was made by none other than the Prime Minister,” he said.

He summed up the overall mood of Majuli.

“The delay shows only our votes matter, not our lives and livelihoods. The tragedy has once again underscored the need for a bridge and streamlining the ferry service. We request the Prime Minister to revisit his unfulfilled promise and deliver before another tragedy strikes,” Hazarika said.

Assam chief minister Himanta Biswa Sarma, after visiting the mishap site, said the construction of the bridge connecting Jorhat with Majuli will start from November and will be completed within four years.

A group of ministers (GoM) would be formed to review the progress of construction, he said.

The Congress reminded the government about its "negligence and carelessness" that led to loss of lives.

"Lessons were not learnt from the unfortunate boat capsize that happened in North Guwahati in September 2018. The precautions that should have been taken by the BJP government all over Assam through the inland water transport department after this incident were simply not visible when the ferry accident happened in Neematighat," the Assam PCC said in a statement.

After his visit, Sarma banned private singleengine boats from plying in Majuli but assured to help the owners with a loan to upgrade to marine engines, announced a highlevel inquiry into the accident and improving the ferry service, dredging between Kamalabari and Neematighat for smooth navigation, fixing of ferry timings by Jorhat and Majuli district administrations and health checkups of ferry staff.

The state cabinet, after a meeting in the evening, directed Jorhat police to file a criminal case against those responsible for the mishap, entrusted additional chief secretary Maninder Singh to probe the incident and submit his report within a month and asked finance minister Ajanta Neog to constantly monitor the progress of the construction of the JorhatMajuli bridge, among other decisions.