Government has sought Rs 300 crore as aid from the Centre for relief and rehabilitation work in the affected areas, says Conrad Sangma 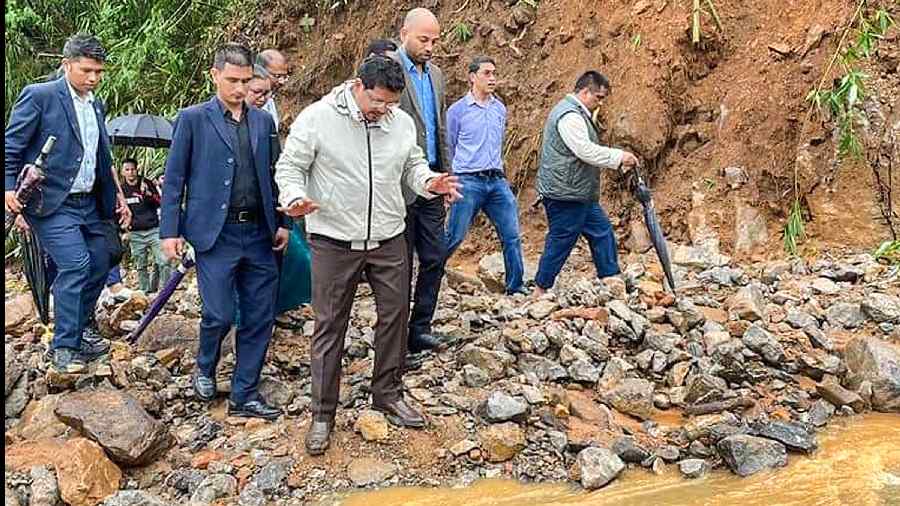 Meghalaya Chief Minister Conrad K Sangma on Thursday said it would take some time to restore road connectivity in the Garo Hills, parts of which have suffered extensive damage due to heavy rain and subsequent flash floods in the past week.

He said that his government has sought Rs 300 crore as aid from the Centre for relief and rehabilitation work in the affected areas.

Expressing shock over the "unimaginable" destruction caused in the hills, Sangma said roads have been washed away by landslides with boulders filling up the gaping pits.

Portions of National Highway-62 -- connecting East Garo Hills with Assam have caved in due to landslides, cutting-off the district for the past six days.

"Going by the intensity of the damage, it will take some time before the thoroughfare can be reopened," the CM, who had been inspecting the affected areas over the past four days, said in a video statement.

In Siju area of the district, a tourism town known for its bat caves, all amenities built for visitors have been wrecked, he noted.

Sangma, during the tour, had handed over a cheque of Rs 4 lakh as ex-gratia to the family of a young woman, who lost her life in the landslide.

He also visited a primary health centre in Siju, where four locals who sustained injuries in landslides are undergoing treatment.

The CM stated that efforts were underway to restore electricity in South Garo Hills, where people have been reeling under darkness for the past few days.

Relief materials were recently air dropped at Maheskhola by IAF choppers, they said.

At least 34 people have died and 11 others went missing in Meghalaya since April 1 amid heavy rain and floods, which have affected over 6.33 lakh people in the state in phases. Over 250 houses were completely damaged and 3,400 homes partially damaged during the period, the officials added.