Promise unfulfilled for a year 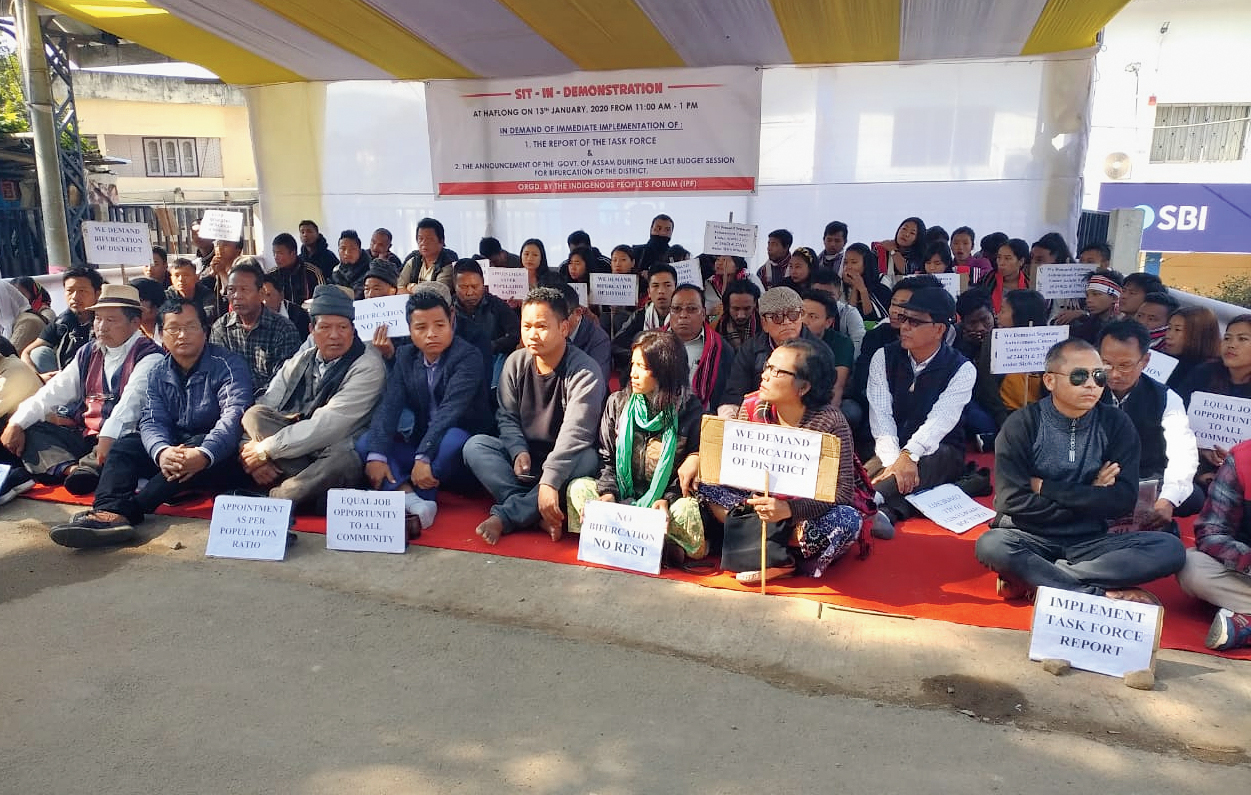 The North Cachar Hills Indigenous People’s Forum (NCHIPF) on Monday staged a sit-in in front of the office of Dima Hasao deputy commissioner, demanding immediate bifurcation of the district into two autonomous districts.

The protest was supported by the North Cachar Hills Indigenous Students’ Forum (NCHISF).

The protesters also submitted a memorandum to Assam chief minister Sarbananda Sonowal through deputy commissioner Amitabh Rajkhowa in support of their demands.

The memorandum says after forcible renaming of North Cachar Hills district as Dima Hasao by the government on March 31, 2010 amid strong protests by the indigenous non-Dimasa people, who constitute 67 per cent of the total population, under the banner of NCHIPF, they started demanding creation of a separate autonomous district with separate council under provisions 1(3) (c) & 2 (1) of Articles 244(2) and 275 (1) of the Sixth Schedule.

The protesters held placards that read: “Equal job opportunity to all communities”, “Appointment as per population ratio” and “We demand bifurcation of district”. They also demanded immediate implementation of the report of the task force as recommended by the Group of Ministers Committee (GoMC) to examine creation of a separate district.

NCHIPF president L. Kuki said, “We have been demanding bifurcation since decades and even the state government has given its nod to it. A task force was constituted under the chairmanship of former chief secretary P.P. Varma in August 2010 to examine the recommendation of the GoMC. If the state government fails to implement our demands within a week, we will intensify our democratic agitations.”

In July 2019, the state government initiated a move for bifurcation of Dima Hasao district into two autonomous districts with finance minister Himanta Biswa Sarma writing to Sonowal for his approval.

Sarma, in his budget speech on February 6 last year, had announced bifurcation of Dima Hasao considering its large size and hilly terrain which make it difficult for citizens to access government schemes.

The NCHIPF and the NCHISF said almost one year had passed since the budget announcement but nothing had come out of it yet. They demanded immediate bifurcation of Dima Hasao into two districts.

NCHISF president David Keivom told reporters that the council was appointing candidates based on their political affiliations.