Sarbananda Sonowal betrayed us by supporting the anti-Assamese bill, said a student 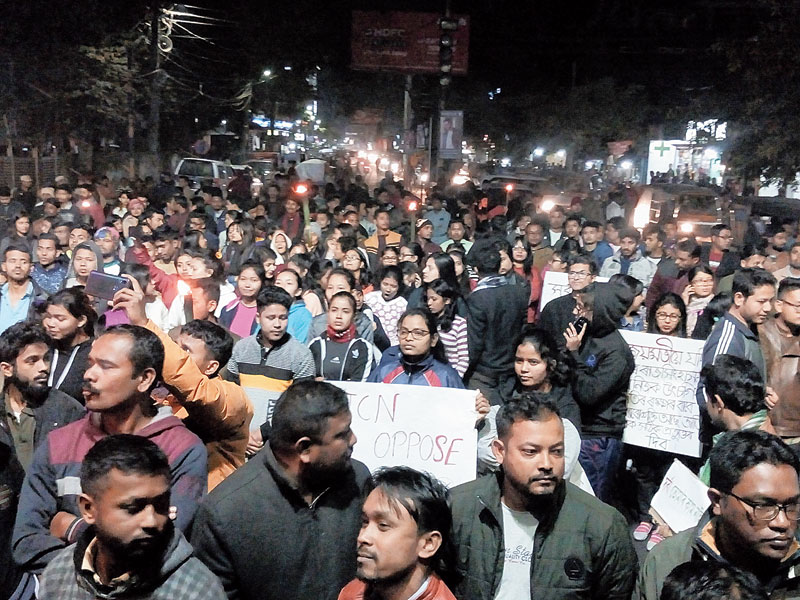 College students came out of their campuses and hit the town’s streets in protest against the Citizenship (Amendment) Bill on Saturday while Union minister of state for food processing industries Rameswar Teli faced the ire of the All Assam Students’ Union (AASU) in Naharkatia in the district.

The students took out rallies from their respective colleges and marched to Thana Chariali junction in the heart of the town, where they put up an hour-long blockade, disrupting traffic. They held placards and banners and raised slogans against Prime Minister Narendra Modi, home minister Amit Shah, chief minister Sarbananda Sonowal, state finance minister Himanta Biswa Sarma and AGP president and state agriculture minister Atul Bora for supporting the bill. They also burnt tyres on the busy square. “Sarbananda Sonowal betrayed us by supporting the anti-Assamese bill. It should be immediately scrapped. We don’t want CAB,” one of them said.

Another protester said, “Students across the state are united against the unconstitutional bill. It will have a negative impact on Assam and the rest of the Northeast. The people have rejected the bill but the government has ignored public sentiments. The Centre is trying to make Assam a dumping ground for lakhs of illegal Bangladeshis. By bringing the bill, the BJP is trying to safeguard its vote bank. We will continue our agitation until the bill is scrapped.”

In Naharkatia, AASU protesters asked Teli to make his stand on the bill clear. They tried to block his car but were prevented from doing so by security forces.

Dibrugarh, the home district of the chief minister, has witnessed widespread protests against the bill.

In Assam, the bill has raised concerns that it will nullify the 1985 Assam Accord, which fixed March 24, 1971, as the cut-off date for deportation of all illegal immigrants irrespective of religious affiliation.