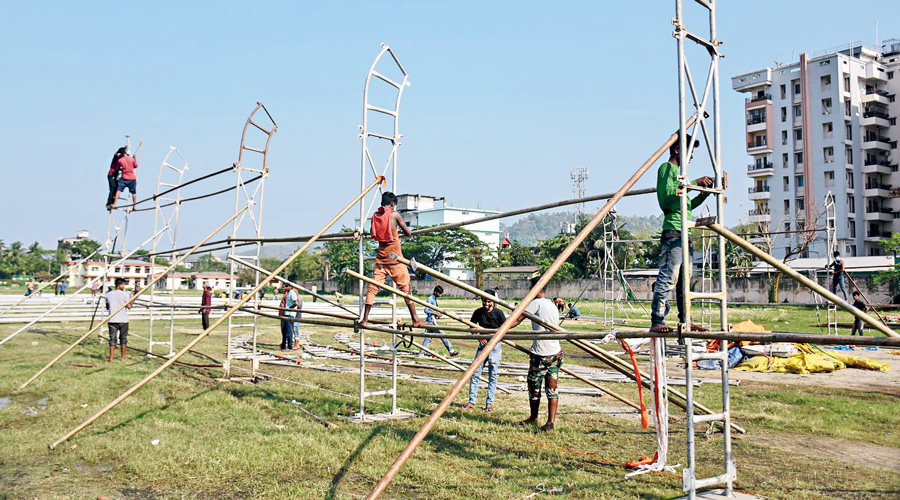 Meghalaya has decided to shut its doors to tourists from April 23 while neighbouring Assam has made testing of truckers entering the state compulsory to check the surge in Covid-19 cases.

Meghalaya chief minister Conrad Sangma announced the decision to bar the entry of tourists through a tweet after a review meeting in Shillong on Monday.

“#Meghalaya will close its doors to tourists from outside the state from 23rd April 2021 however, local tourism will continue. There will also be closure in tourist locations that have high tourist footfall. The time frame of RT-PCR tests will be reduced from 72 to 48 hrs,” Conrad tweeted.

#Meghalaya will close its doors to tourists from outside the state from 23rd April 2021 however, local tourism will continue. There will also be closure in tourist locations that have high tourist footfall. The time frame of RT-PCR tests will be reduced from 72 to 48 hrs. pic.twitter.com/rtH9WK4J7M

This is the second time since the pandemic broke out that Meghalaya, which received around 12 lakh domestic and international tourists in 2019, has barred the entry of tourists. It had lifted the bar only on December 21 last year, after about nine months.

Another major decision was the closure of all schools for 14 days from Tuesday but ongoing board exams will not be affected. Government and private offices will function at 50 per cent capacity, Conrad said.

In neighbouring Assam, chief minister Sarbananda Sonowal too chaired a high-level meeting in Guwahati to prepare a road map to check the surge in cases.

While laying stress on making the people aware about wearing masks and maintaining cleanliness, Sonowal asked the departments concerned to ramp up Covid-19 tests at bus and truck terminuses while making tests of truck drivers coming from outside compulsory at the Srirampur and Chagolia inter-state check gates. Already tests have been made compulsory for those travelling by flights and trains to the state.

Sarma has instructed health department officials to start a helpline for coronavirus consultations and problems.

Sources said there was no question of imposing a lockdown but all possible measures would be taken to enforce the standard operating procedures to check the surge.

Tests have revealed the presence of the highly infectious and deadlier UK variant during the second wave in the state, according to Sarma, who told a TV channel that there was no link between election rallies and the rise in Covid cases in Assam.

“Most testing positive came from Mumbai, Delhi and Bangalore. We have analysed the data. Most cases have travel history, they have tested positive at airports and railway stations. We have not been able to establish a link between election rallies and Covid cases,” Sarma said.

The three-phase Assembly elections in Assam, which ended on April 6, had witnessed huge campaign rallies.

Till Sunday, Assam had 5,268 active cases, including 639 detected during the day which also saw six deaths.

Neighbouring Nagaland too ordered closure of all schools for students of Classes I to VIII during the day which also saw governor R.N. Ravi hold an interaction-cum-consultative meeting with the Church leaders of various Christian denominations on Covid-19, urging them to use their moral and spiritual capital to save the people from the pandemic.

Ravi advised the Church leaders to make the people more conscious and aware of the pandemic challenges and the need for strictly adhering to Covid-appropriate behaviour.