Although the state has no supply problem at the moment, the government is not taking any chance because of the soaring cases 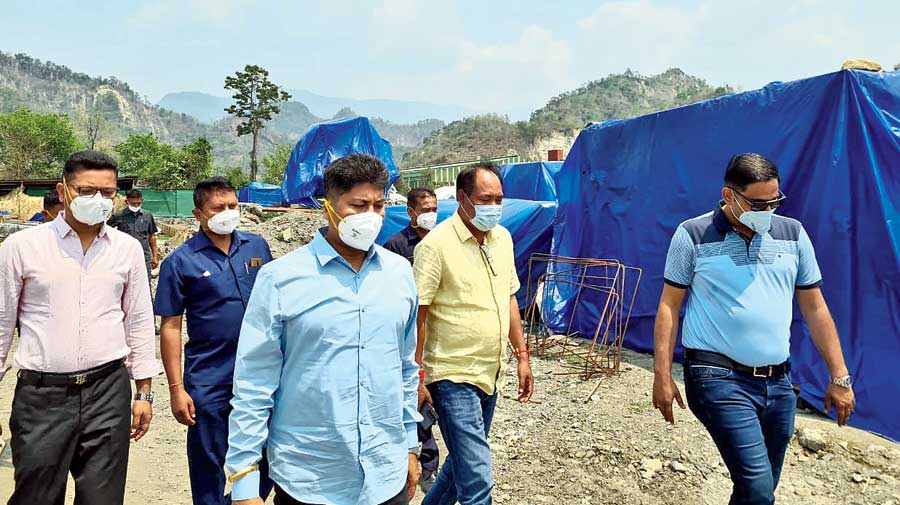 The Assam government on Sunday helped a Guwahati-based entrepreneur resume work on an oxygen plant he is setting up in Bhutan’s Samdrup Jongkhar district bordering Baksa district so that it can easily source oxygen for critical Covid patients in times of crisis.

Assam’s minister of state for health Pijush Hazarika along with Rajya Sabha MP Biswajit Daimary visited the under-construction oxygen plant in the morning on the direction of health minister Himanta Biswa Sarma.

“After our stock-taking visit, our health minister (Sarma) got in touch with the Centre to secure permission from Bhutan to allow completion of the  plant which was stuck following the outbreak of Covid last year. It will take about 20-30 days to commission the plant from where we can source 50MT of oxygen everyday,” Hazarika told The Telegraph.

India is facing acute shortage of oxygen because of rising Covid patients with acute respiratory problem. Though Assam has no such problem at the moment, the state government is not taking any chance because of soaring Covid cases.

A part of the plant
Telegraph picture

The Bhutan plant is being set up by Guwahati-based PJ Kochar in partnership with a Bhutanese national.

“In these challenging times this plant will be of immense help in winning the fight against Covid-19,” Hazarika said.

Besides helping resume work on the stalled oxygen plant, health minister Sarma has also urged all hospitals to set up their own oxygen units. The government is ready to extend all possible help to these hospitals. Assam has installed eight oxygen plants with a capacity of 5.25MT a day since last year. It has plans to set up 15 more plants.

Few days ago, Sarma had announced granting all oxygen-carrying vehicles-tankers the status of ambulance, to enable their hassle-free movement in the state and transit through Assam for speedy delivery of oxygen to centres.

Sarma on Sunday said ruled out a lockdown for the moment even though cases are rising. He also said that the state is not facing shortage of resources to tackle the crisis whether it is oxygen, medicines, kits or vaccines.

He also disclosed that Sun Pharma has started producing Remdesivir at its Palashbari unit in Kamrup district, about 50km from here. The company, which has the capacity to produce 3,60,000 vials a month, has committed to provide 10,000 vials to the state government which will help tide over shortage, the minister said.

“In what shall give comfort to all, pleased to share that I visited @SunPharma_Live plant Palasbari, which has a capacity of 80K #Remdesivir vials production per week. Requested them to speed up production & rollout. They would support Assam as well,” Sarma tweeted.