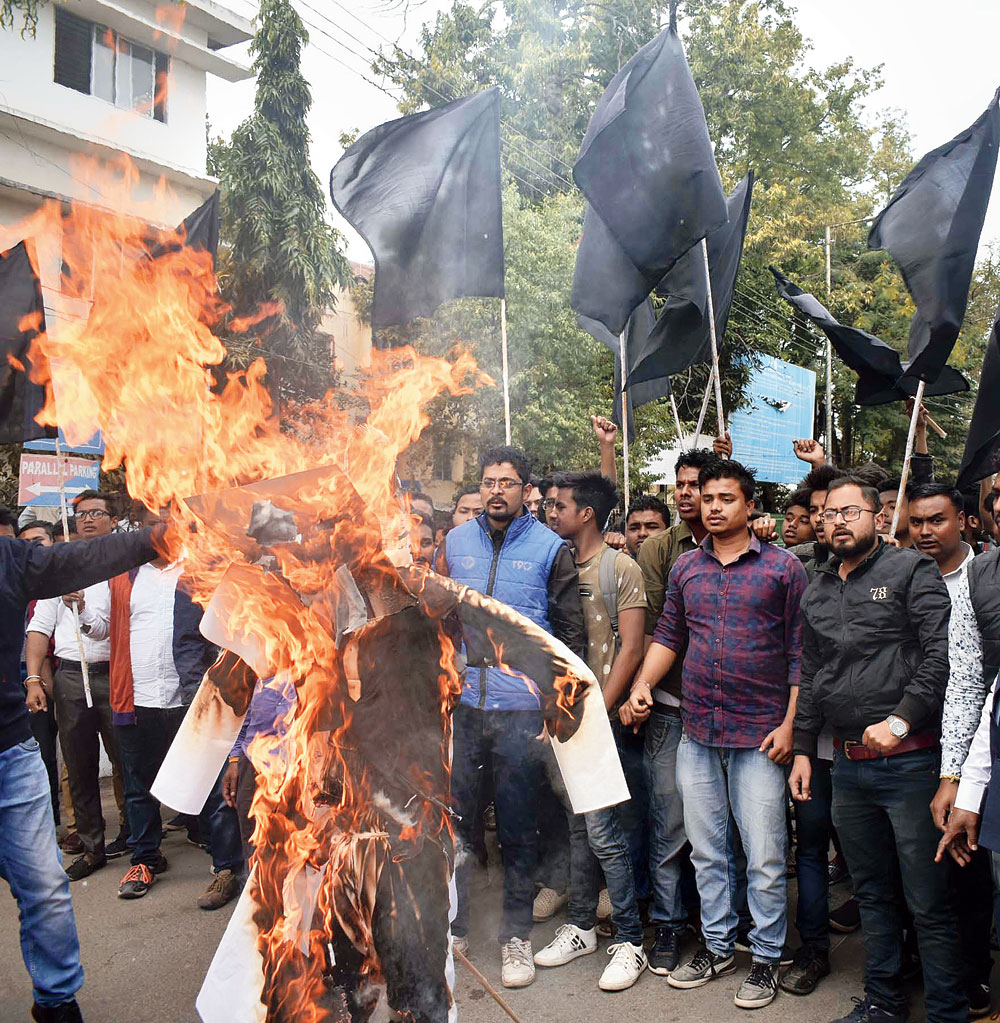 Activists of the All Assam Students Union (AASU) burn the effigy of Prime Minister Narendra Modi in Guwahati on February 9 in protest against the Lok Sabha passing the “anti-Assam” Citizenship (Amendment) Bill in January
Picture by UB Photo
Umanand Jaiswal   |   Guwahati   |   Published 10.04.19, 01:46 AM

Pranjal Kalita, the 22-year-old general secretary of the Cotton University Students Union in Guwahati, is indignant.

When The Telegraph reached out to him to know the union’s views on the BJP’s poll manifesto — Sankalp Patra — released on Monday, Kalita said: “We have already issued an appeal to reject the BJP and its allies in the Lok Sabha polls for its commitment to the anti-Assam, anti-Northeast citizenship (amendment) bill (CAB). We were, are and will remain opposed to the CAB as it is a threat to the indigenous Assamese people, their culture, language and identity.”

The BJP manifesto says Hindus, Jains, Buddhists and Sikhs fleeing persecution from neighbouring countries would be given Indian citizenship. It has also promised to “protect the linguistic, cultural and social identities of people of the northeast”. However, its push to the bill is what is evoking sharp reaction.

Even the influential All Assam Students’ Union (AASU), which was at the forefront of the widespread agitation against the contentious bill in the Northeast for months, has shed its neutral stance.

After urging voters on Sunday to take a “firm, decisive and correct decision”, AASU on Monday exhorted them to teach the BJP a lesson for “ignoring” the sentiments of the people over the proposed “anti-Assam, anti-Northeast bill” as it violates the 1985 Assam Accord which had set March 24, 1971, as the cut-off date for detection and deportation of foreigners illegally staying in Assam.

Similar don’t-vote-lotus (the BJP symbol) calls were also made by the anti-bill Krishak Mukti Sangram Samiti and Forum Against Citizenship Act Amendment Bill. The North East Students’ Organisation too condemned the BJP over the bill as it was “aimed” at reducing the indigenous communities “into a minority in our own land”.

The earlier bill, which proposed granting citizenship to non-Muslims who fled to India following persecution or fearing persecution till December 2014, was passed by the Lok Sabha on January 8 this year and was listed but not tabled in the Rajya Sabha on February 13 for want of numbers. There were massive protests in states ruled by the NDA.

Even its ruling coalition partner in Assam, the Asom Gana Parishad, which had snapped ties with the BJP over the CAB, but was back in the alliance in March, said on Tuesday it remained opposed to the proposed bill.

Temperatures have once again soared since Monday and is unlikely to subside till the polls end with the third and final phase in Assam on April 23.

It is against this backdrop that Assam and the Northeast go to the hustings from April 11. Simultaneous Assembly polls are also being held in the frontier states of Arunachal Pradesh and Sikkim the same day.

A protest in Guwahati over the Citizenship (Amendment) Bill.
Telegraph file picture

There are 25 Lok Sabha seats in the region (including Sikkim), of which 14 are in Assam, making it the most crucial state in the Northeast for both the main contenders, the ruling BJP and the Opposition Congress, with their big guns — Prime Minister Narendra Modi, BJP president Amit Shah and Congress chief Rahul Gandhi — making several trips to the region.

Both the BJP and Congress hold eight Lok Sabha seats each in the Northeast.

The Congress has made the “anti-Northeast bill” and the BJP’s unfulfilled promises the cornerstone of its campaign to regain lost ground in what was its bastion before the Modi wave of 2014. This is evident from the Congress’s Tezpur candidate MGVK Bhanu’s campaign pitch: “I am not a factor, the CAB is.”

The BJP has once again flagged its development and anti-corruption poll planks. But from all accounts, it seems the citizenship bill will dominate the poll narrative.

Says political commentator Arupjyoti Choudhury: “Till the other day it was generally felt that as most of the anti-CAB organisations are out of the poll scenario and the AGP has re-aligned with the BJP, CAB would be a non-issue. But with the publication of the BJP manifesto and the renewed emphasis on enacting the CAB, the anti-CAB brigade is mobilising once again to teach the BJP a lesson. Irrespective of the final outcome, it seems the CAB is again gaining momentum as a significant poll issue days before the first phase.”

Analysts say the BJP is pushing the bill despite stiff opposition because of two reasons. First, to woo the Bengali Hindu voters, a significant chunk of whom may not figure in the final National Register of Citizens to be out in July. They could prove decisive in a tight contest.

Second, to polarise voters outside the Northeast, especially in Bengal, to mount a challenge to Mamata Banerjee’s Trinamul Congress.

“The BJP feels losses in the Northeast would be compensated by gains elsewhere because CAB is for the entire country, not confined to the Northeast,” Choudhury said.

The BJP clearly has gone for broke in a region where identity and culture are issues that matter the most.

Citizen bill set to be major factor this poll