No positive case in tripura: CM 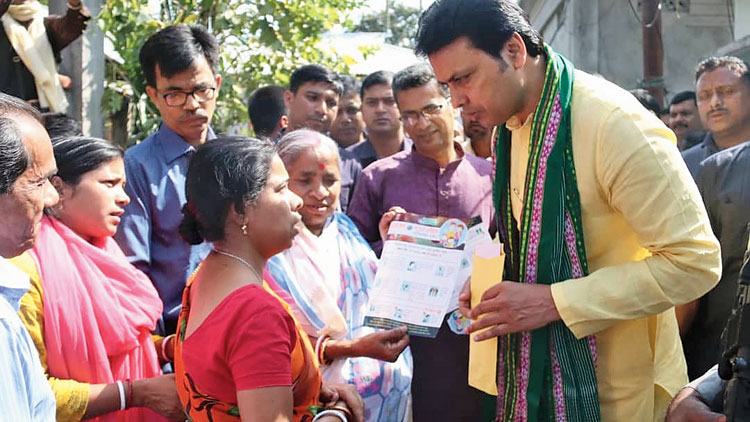 A release issued by the chief minister’s office on Tuesday said Deb had campaigned door to door among people living in the bordering areas of Kailashahar subdivision in Unakoti district on Monday to raise awareness about the measures that need to be taken to prevent the spread of coronavirus.

Apart from distributing leaflets, Deb interacted with the local population on how to prevent the spread of the virus. He said no positive case has been reported in Tripura till date but the people need to be careful and maintain cleanliness everywhere, the release said.

On Tuesday, BJP state president Manik Saha and general secretary Rajib Bhattacharya carried out the campaign at Banamalipur near here. The CMO release said the state government, as a precautionary measure, had announced the shutdown of all educational institutions, cinema halls, gymnasium and swimming pools from Tuesday till March 31. Besides, prohibitory orders under Section 144, promulgated to restrict the movement of five people or more together, will remain in force till March 31.

An official in the CMO, who did not wish to be named, said the chief minister’s initiatives would continue in the coming days as well.

The state government has also issued a release saying that foreign and domestic tourists who enter the state must submit “self-reporting form” as a precautionary measure against the coronavirus disease or Covid-19. This form can be found at the entrance to the state, the tourist information centre and hotels across the state.