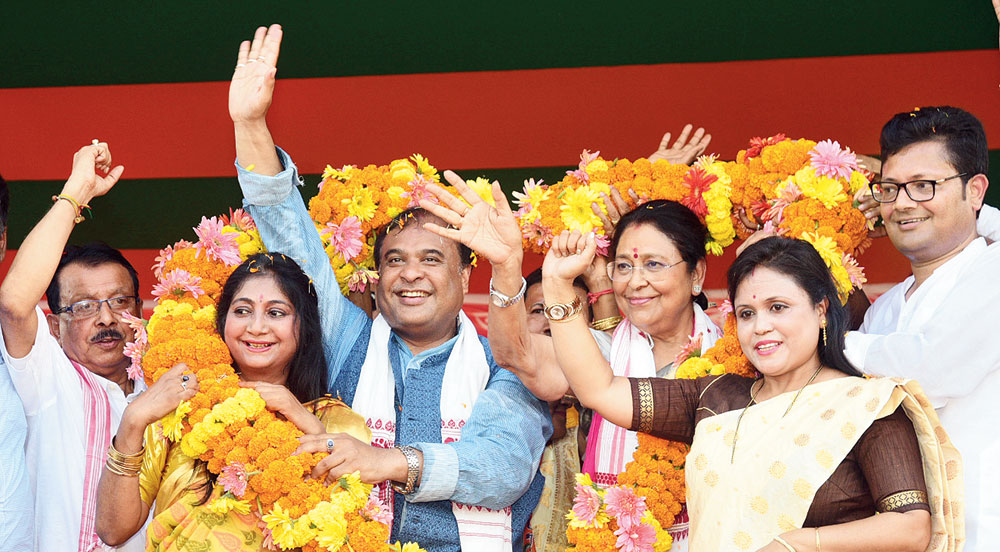 The ghost of the citizenship (amendment) bill continued to haunt Assam chief minister Sarbananda Sonowal as it resurfaced after a lull on Thursday while he was campaigning at Goroimari, under Gauhati Lok Sabha constituency, for the BJP candidate Queen Oja.

Around 20 people brandished black flags in protest against the BJP’s promise to re-introduce the bill if it comes back to power, when Sonowal was addressing the gathering.

Police acted promptly to control the situation and arrested a woman identified as Saheba Ahmed.

Goroimari, about 65km from Guwahati, is a minority-dominated sandbar area in Kamrup district.

Asked about the incident, Sonowal said: “This was carried out by the Congress as it had engaged in similar activities earlier too. It is also creating communal conflict as proven by the incident in Biswanath Chariali.”

He was referring to the mob assault and alleged force feeding of pork to a vendor in Biswanath district for allegedly selling beef in his stall and the arrest of an alleged NSUI worker as the prime suspect. The NSUI, the Congress student wing, has dismissed the accused’s connection with it though.

Sonowal urged voters to cast their votes in favour of Oja to help Narendra Modi become the Prime Minister again.

The day was also marked by a road show at Palashbari in support of Oja.

“Our party will win 10 out of the 10 Lok Sabha seats in Assam which have completed polling,” Sarma claimed. Moreover, Queen Oja will win the Gauhati seat by a large margin.”

Without directly mentioning the minority and majority communities, he said, “One category, who live on sars and saporis (sandbars), vote for the Congress in high percentage, while Assamese voters don’t show such enthusiasm while casting votes for the BJP. The Congress voters in sars and saporis never miss the opportunity to cast their votes but the Assamese voters of the BJP always neglect in casting their votes.”

Gauhati Lok Sabha constituency will go to polls on April 23.