Assam becomes the second state with most national parks in India 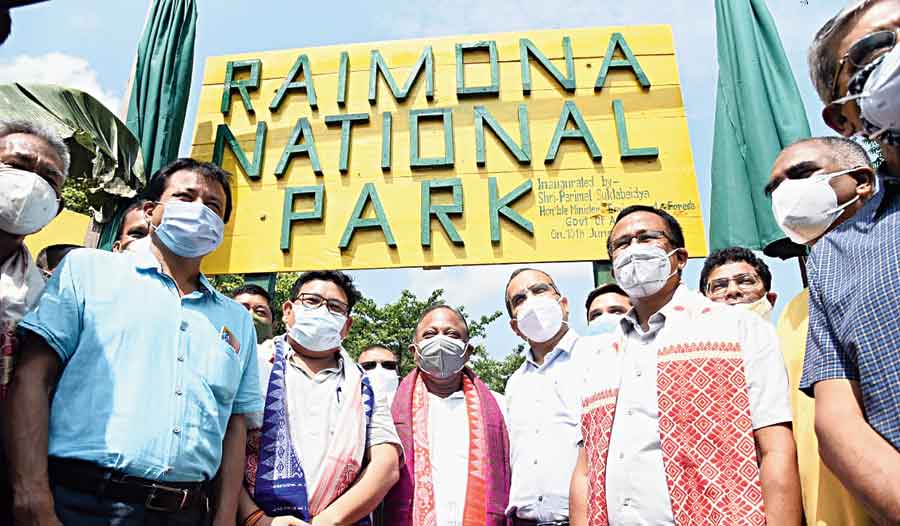 The inauguration of the Raimona National Park at Kachugaon under Kokrajhar district on Friday
Telegraph picture
Umanand Jaiswal   |   Guwahati   |   Published 12.06.21, 12:41 AM

Assam this week became the second state with most national parks in the country, a development flagged by the re-elected month-old BJP-led state government as one of its key achievements.

The number of national parks in Assam went up to seven after the government notified Raimona reserve forest and the Dehing Patkai Wildlife Sanctuary as national parks on June 9.

Assam is now behind Madhya Pradesh and the Union Territory of Andaman and Nicobar Islands, having nine national parks each, according to forest minister Parimal Suklabaidya, who formally inaugurated the Raimona National Park on Friday in the presence of BTC chief Pramod Boro.

Dehing Patkai located in Upper Assam’s Dibrugarh and Tinsukia districts is spread over 234.26sqkm while Raimona in lower Assam’s Kokrajhar district has an area of over 422sqkm.

“The two newly created national parks will not only help boost conservation efforts but will also provide fillip to the tourism and agriculture sectors. Both are biodiversity hotspots. It is a landmark initiative towards environment restoration,” Suklabaidya said.

Cabinet minister Pijush Hazarika told The Telegraph that conserving the state’s forest cover is one of the “pro-state, pro-people” steps initiated by the Himanta Biswa Sarma government within a month of assuming charge.

The other steps include the launch of the statewide fight against drugs, hiking the interim daily wage of tea garden workers, increasing the government stake in Numaligarh Refinery Limited by investing Rs 2,187 crore, fixing dates for the release of pension to aged, women and disabled, bringing down Covid-19 cases and ensuring the safe release of ONGC employee Ritul Saikia abducted by the Ulfa (Independent).

“There are also sustained efforts to prevent corruption and cattle smuggling. We now have guardian ministers to expedite development besides steps to minimise damage from annual flood, provide government jobs to one lakh youth and freeing encroached land to absorb unemployed people in the agriculture sector,” Hazarika said.

All these steps were flagged by chief minister Sarma on Thursday, the day the new government completed a month.

Dehing Patkai’s road to national park status has been quite stormy.

Around the same time last year there was a sustained online campaign — Save Dehing Campaign — to protect the sanctuary, also known as the “Amazon of the East”, from illegal mining.

The trigger for the campaign was the nod by the National Board for Wildlife on April 7, 2020, to the North Eastern Coalfields (NEC), a unit of Coal India Limited, to use 98.59 hectares from the proposed reserve forest at Saleki for mining. Three PILs were also filed in Gauhati High Court which on June 4, 2020, issued notices to CIL and Dispur to respond by July 14 on measures to protect the biodiversity hotspot from alleged illegal mining.

While the NEC in its response said it has suspended mining operations in the area, the then Sarbananda Sonowal-led government on July 6 announced its decision to upgrade the wildlife sanctuary into a national park for the protection of the biodiversity hotspot.

Till date, 47 mammals, 47 reptiles and 310 butterfly species have been recorded in Dehing Patkai. It has unique floral and faunal diversity and the contiguous stretch of forests spanning two districts also houses the last remaining stretches of rainforest in India known as the Dehing Patkai rainforest.

Raimona too has had a chequered journey, ravaged by insurgency in the late eighties. It shares contiguous forest patches with the Phibsoo Wildlife Sanctuary and Jigme Singye Wangchuk National Park in Bhutan (1,999sqkm) creating a transboundary conservation landscape of more than 2,400sqkm.

Raimona’s new tag will ensure long-term conservation of endemic species such as the golden langur — the mascot of BTC — and endangered species like the Asian elephant, royal Bengal tiger and other varied flora and faunal species. It has over 380 species of plants, 170 species of birds and 150 species of butterflies.