Assam superintendent of police in custody in paper leak case

Kumar, the brother of chief secretary Kumar Sanjay Krishna, is the “biggest catch” in the case, suggesting the presence of a deep-rooted recruitment racket backed by influential people 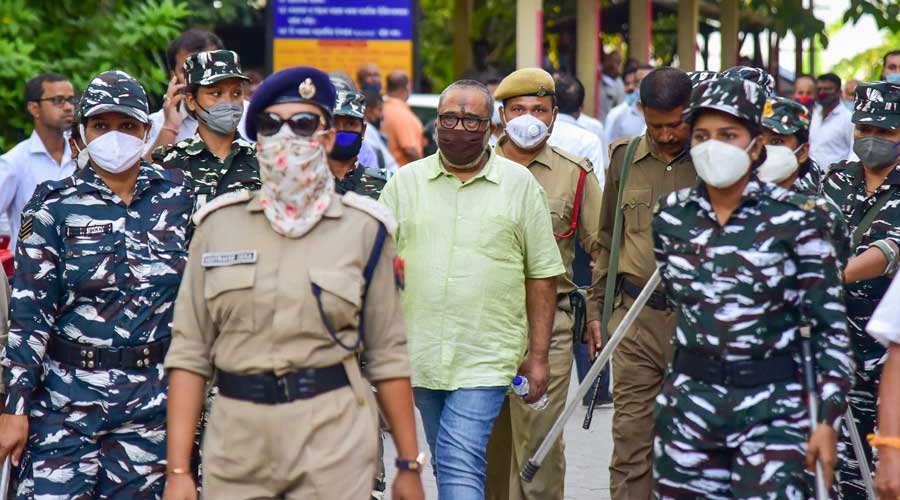 Friday also saw leader of the Opposition Debabrata Saikia demanding an inquiry by a sitting judge of Gauhati High Court into all recruitments made by the BJP-led state government since it came to power in 2016.

Kumar, who was arrested by the CID on Thursday night, is the “biggest catch” in the case, suggesting the presence of a deep-rooted recruitment racket backed by influential people, a charge made by the Opposition Congress.

The police headquarters on Friday said the CID has arrested 22 people in the case, including one Debraj Das of Barpeta on the same day. Over Rs 46.7 lakh in cash and gold ornaments weighing 79 tolas were recovered from a locker in Bank of Baroda opened in the name of Das’s wife. Earlier, Rs 1.83 crore was recovered from Das’s house.

Besides the CID, the crime branch of Guwahati police and Nalbari police have also made arrests in the September 20 paper leak and recruitment case. Over Rs 6 crore has been recovered from several places following confessions of the accused, suggesting a “flourishing” cash-for-jobs racket.

Kumar is the brother of chief secretary Kumar Sanjay Krishna, who had tweeted a few days ago that the “law will take its own course on the basis of evidence”.

Saikia, who is also the Congress legislature party leader, on Friday evening accused the ruling BJP of operating a new syndicate in recruitment to various departments of the state government and demanded an inquiry by a sitting judge of Gauhati High Court into all recruitments made in the last four and a half years under its watch.

Saikia alleged that “adherence” to a particular ideology or payment of bribes to specific middlemen were the means to secure jobs during the tenure of the incumbent state government.On the sub-inspector recruitment scandal, he said a few middlemen such as Saroj Sarma have been arrested along with a couple of former and serving police officers, but the police have been “unable to muster the courage even to question other suspects because the latter enjoy political protection”.

He said it is clear that the recruitment scam is “all-pervasive and has been going on” for quite some time, because admit cards of recruitment examinations “pertaining” to other governments such as the irrigation department have been allegedly seized from Saroj and other middlemen.

Saikia also referred to reports that around Rs 5 crore had been recovered from accused middlemen in Goalpara and Dhubri districts and said the police have deliberately refrained from trying to find out the names and the number of candidates who paid the bribes.

He further alleged that the actual amount of money recovered so far is being kept under wraps due to political intervention and the money may have been “already misappropriated”.

Referring to chief minister Sarbananda Sonowal’s frequent claims of providing a clean administration and zero-tolerance towards corruption, Saikia reiterated his call for a judicial probe and said Sonowal ought to respect the faith reposed in him by the public.

Saikia also highlighted the alleged irregularities in the recent recruitment drive by the irrigation department and the illegal trade in mineral resources such as coal. He said he had demanded a CBI inquiry into the illegal mineral trade in the Assembly and other fora. “However, the government has not dared to involve the CBI,” Saikia said.Reacting to queries about suspected involvement of more influential people in the case, senior cabinet minister Himanta Biswa Sarma said, “If a serving SP has been arrested, then there should be no doubt that others involved will be spared.”