A police official said 1,040 rebels have formally bid goodbye to arms and they will sign a peace accord at Dengaon 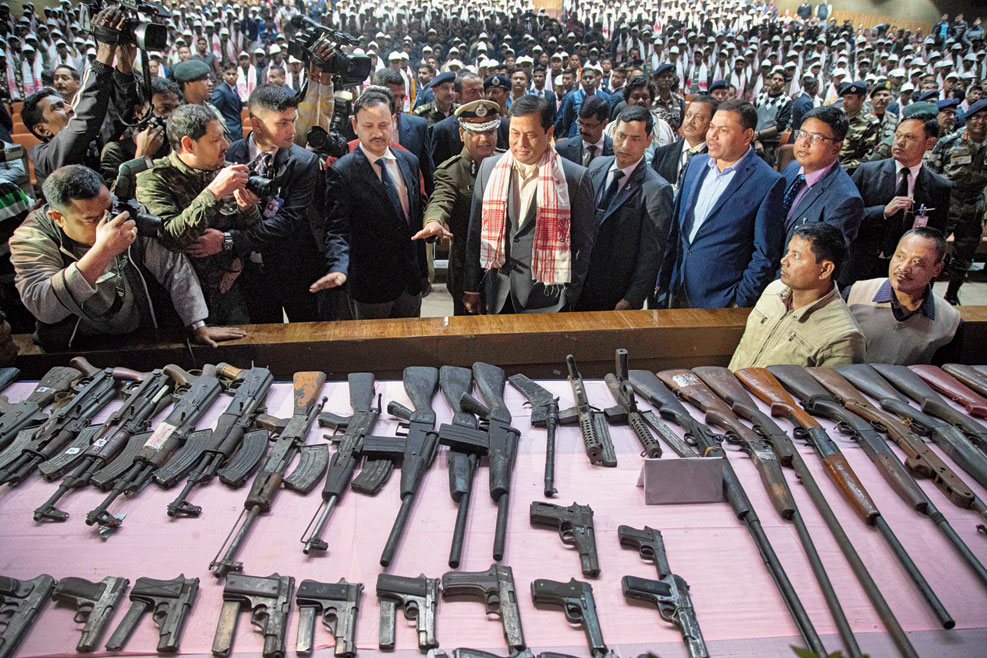 Altogether 1040 members of five militant outfits operating in undivided Karbi Anglong district in Assam laid down arms here on Tuesday evening, two days ahead of signing a peace accord in the presence of Union home minister Amit Shah. Shah is scheduled to visit the poll-bound state on February 25.

This is the third major “mainstreaming” of rebels since 2020. Altogether 1,615 members from three National Democratic Front of Bodoland (NDFB) factions had laid down arms in January 2020, three days after the signing of the tripartite Bodo Accord. This was followed by laying down of arms by 64 rebels belonging to four outfits, the big catch being Ulfa(I)’s deputy commander-in-chief Drishti Rajkhowa.

One of the leading and dreaded names in the state militancy, IK Songbijit, who was leading the NDFB (S) before forming the PDCK, was among those who laid down arms on Tuesday evening. He is wanted in several terror cases.

The PDCK, which had declared a unilateral ceasefire on February 16 in a memorandum to Shah had urged the creation of an Autonomous State under Article 244(A) as the only lasting solution for peaceful existence between the people of the hills and the plains in the state.

A police official said 1040 members have formally bid goodbye to arms and they will sign a peace accord at Dengaon, around 90 km from Diphu, the district headquarters of Karbi Anglong district, during the home minister’s  visit.

He also said the development is sure to usher in peace in the hill districts of Karbi Anglong and adjoining Dima Hasao which have witnessed unrest over the creation of a state within state since December.

Welcoming the development, the JACAS “appealed” to the Centre to fulfil the outfits’ long-standing demand “for self-determination, i.e. autonomous statehood as provided under Article 244-A of the Constitution of India” which is basically “a state within the state” comprising undivided Karbi Anglong and Dima Hasao districts.

The JACAS also reminded the ruling BJP that “implementation of Article 244-A has been one of its major poll promises made to the people of the hills in 2008. The JACAS, therefore, appealed to Shah to declare the “creation” of the state within state and “fulfil” BJP’s poll promise and also the political aspiration of the hill people to usher in lasting peace while urging the locals to stand in solidarity with the outfits which laid down arms on Monday, JACAS chairman Khorsing Teron said.

The KLNLF is the oldest among the outfit, formed in 2004 and entered into a ceasefire in February 2010. The breakaway members from the group form another group, the KPLT in 2011.

Besides Karbi Anglong, Shah will also visit Batadrava Than, the birthplace of Srimanta Sankardev in Nagaon district. He will launch the project for development and beautification of the Batadrava Than at a cost of Rs 150 crore. This will be his fourth visit to the state.