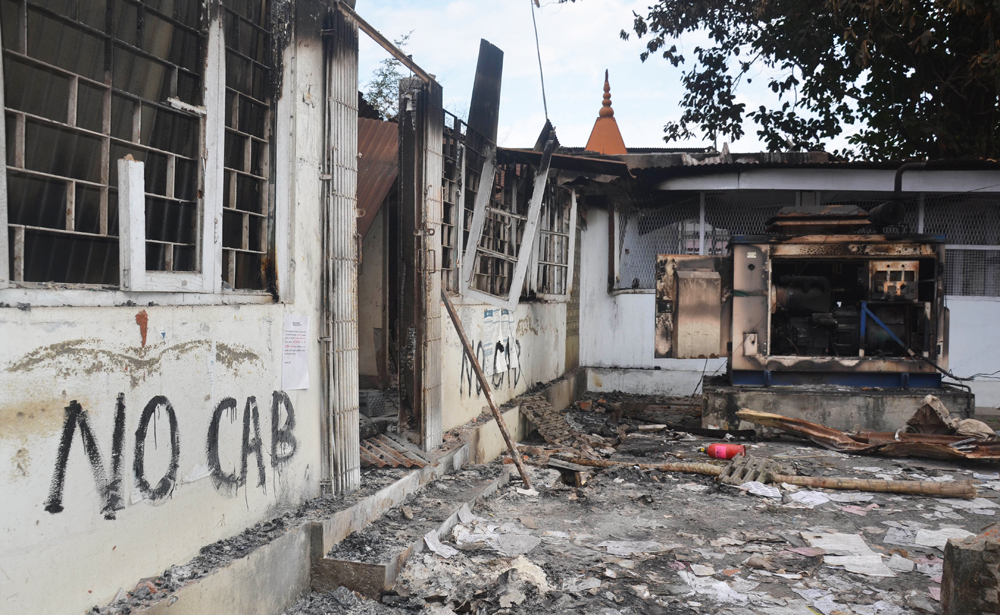 The charred post-office at Chabua that was allegedly vandalised during an Anti-Citizenship Amendment Act protest, in Dibrugarh district of Assam, Tuesday, December 17, 2019.
(PTI)
A Staff Reporter   |   Guwahati   |   Published 18.12.19, 10:34 PM

Taking suo-moto cognizance of media reports, the Assam Human Rights Commission (AHRC) on Wednesday directed the state government to constitute a high-level probe into the incidents of deaths and injuries during the ongoing protests across the state against the Citizenship (Amendment) Act.

The rights’ body also directed the state government to furnish a detailed report within a month. The AHRC in its order said, “Suo-motu cognisance of the case has been taken in view of the news items published in both English and vernacular dailies published from December 13 to December 16, informing about the death of five protesters in police firing and baton charge by security forces and injuries to 27 protesters in the protest against Citizenship (Amendment) Bill (CAB).”

Notice issued to the state government by the AHRC also mentioned that two youths, Dipanjal Das and Sam Stefford, were killed at Lachit Nagar and Hatigaon here in police firing and no weapon was found in their hands.

“Two more protesters, Iswar Nayak of Udalguri and Abdul Alim of Lalung Gaon, Guwahati, were injured in alleged police firing at Udalguri and Lalung Gaon, respectively, on December 12 during a protest and succumbed to their injuries at Guwahati Medical College and Hospital, Guwahati,” the order said.

It also added that another protester, Dwijendra Panging, reportedly succumbed to his injuries sustained during baton charge by police on December 14 and some 27 persons sustained injuries during a clash in Guwahati on December 12.

On December 15, Assam police arrested 175 persons besides picking up 1,406 others in connection with the protest across the state, AHRC said.

The AHRC order added, “Issue notice to the chief secretary, Assam government, to constitute a high-level committee to inquire into the above incidents to find out the circumstances leading to the deaths of the protesters on different dates, injury of 27 persons in clash, the arrest of 175 persons and picking up of 1,406 others in connection with the protest across the state and to submit exhaustive report thereof within one month of receipt of the notice.”

The commission has fixed January 20 for the submission of the report.