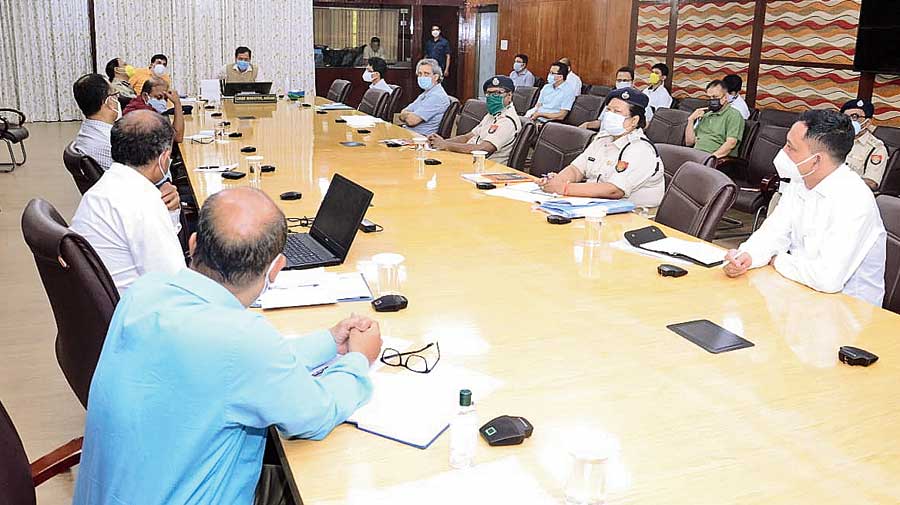 Assam chief minister Sarbananda Sonowal in a review meeting with ASDMA officials at his residence in Guwahati on Thursday for assessing the situation following Wednesday’s earthquake
Telegraph picture
Our Special Correspondent   |   Guwahati   |   Published 30.04.21, 02:30 AM

Assam chief minister Sarbananda Sonowal has asked the Assam State Disaster Management Authority (ASDMA) to explore opportunities for a tie-up with Japan to “develop” an early warning system for earthquakes and creating awareness among the people to go for earthquake-resistant buildings.

The idea was floated during a meeting with the officials of the ASDMA at Sonowal’s official residence. The meeting was held to assess the situation arising out of Wednesday’s massive earthquake and the damage caused by it.

Assam continued to feel the aftershocks of Wednesday’s massive earthquake, recording altogether 20 aftershocks, eight of them since midnight, prompting the chief minister to hold a high-level stock-taking meeting where he also directed the ASDMA to collect earthquake data for the state since 1896 and examine the nature of their impact on the state to prepare an effective mitigation roadmap for the future.

Though, the aftershocks since midnight were less than 3.6 on the Richter scale, the frequency with which it struck was enough to rob the sleep of most.

People spoke to The Telegraph since Wednesday have been asserting that they have never experienced such tremors in the past even though quakes are routine in the region
Apart from the aftershocks, the extent of damage has also increased as reports continue to pour in from the districts.

Officials said reports reaching the ASDMA reveal damage to 414 residential and 118 institutional buildings in 16 of the state’s 34 districts.

Apart from buildings, 200 electric poles, two bridges, an embankment and two high-tension power lines have also been damaged, disrupting power supply and movement of people in the affected areas, the chief minister was briefed in the stock-staking meeting.

Citing example of Japan in successful mitigation of earthquakes, Sonowal called for continuous efforts from all stakeholders for minimising damage caused by jolts and not look for stop-gap arrangements and ensure strict adherence to building by-laws and National Building Code by agencies like the Guwahati Metropolitan Development Authority MDA and PWD.

The devastation caused by the earthquake measuring 6.4 on the Richter scale on Wednesday morning will only increase because reports from two districts are awaited, an official said.

The epicentre of the quake that hit the state at 7.51am was Dhekiajuli in Sonitpur district with a focal depth of 17km. Tremors were also felt across the Northeast and some parts of Bihar, Bengal and Bangladesh.

The National Centre for Seismology under the ministry of earth sciences on Wednesday said: “Preliminary analysis shows that the events are located near the Kopili fault closer to Himalayan Frontal Thrust (HFT). The area is seismically very active falling in the highest seismic hazard zone V associated with collisional tectonics where Indian plate subducts beneath the Eurasian plate.”

Sonowal had visited Dhekiajuli on Wednesday and directed the deputy commissioners to carry out a field survey of the damage and submit a report for detailed review and also to extend necessary help and support to the affected people.

On Thursday, he directed the release of ex-gratia to the victims of earthquake at the earliest and take steps for free treatment of the injured.

The number of injured has also gone up to 12 from 10 on Wednesday. “There has been no death apart from the two persons who died of shock during the tremors on Wednesday,” an official said.

Directing the ASDMA to take up awareness campaigns at the school level and holding of regular mock drills there, Sonowal stressed on the importance of making children and general public aware about ways of coexisting with earthquakes, increased use of mass media for spreading awareness about the do’s and don’ts during earthquakes and other related information.