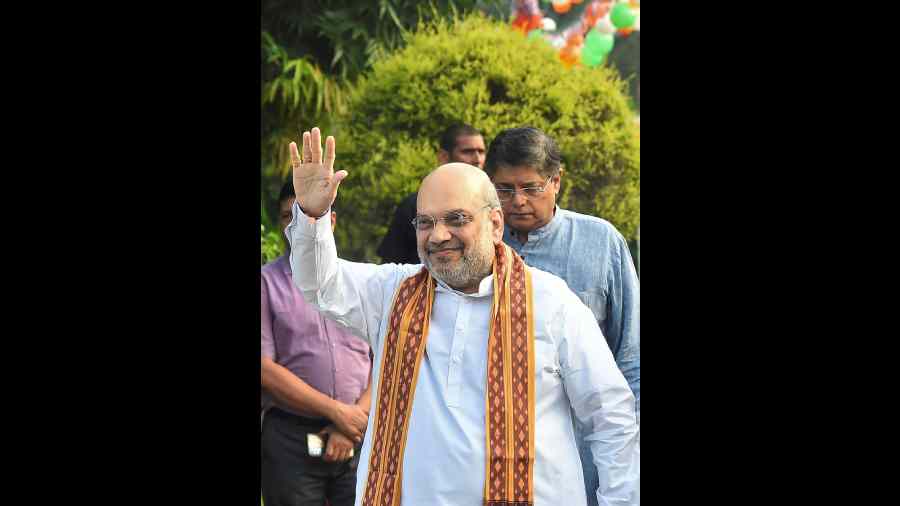 A delegation of Meghalaya ministers led by CM Conrad K Sangma will meet Union Home Minister Amit Shah on November 24 to demand a CBI or NIA probe into the violence that left six people dead on the state's border with Assam.

The Assam government, however, on Tuesday said it would hand over the investigation into the violence on its disputed boundary with Meghalaya in West Karbi Anglong district to a central or neutral agency.

"We will officially inform him (Shah) about the firing incident that took place in Mukroh village and demand that an investigation be made by a central agency either NIA or CBI," Sangma said after a cabinet meeting here on Tuesday.

An FIR has been registered in the case and a special investigation team (SIT) headed by DIG of Eastern Range would be constituted to probe the incident, he said, adding that "the same will be handed over to a central agency once approved by the Centre".

"A cabinet delegation will meet the union home minister on November 24," he said.

Sangma also stated that the delegation will also meet the National Human Rights Commission (NHRC) in New Delhi and submit a report on the incident for necessary action.

"The SIT will start conducting the probe, and as and when the Centre approves our proposal, the investigation will be handed over to a central agency," he added.

Sangma also said his government also decided to constitute a judicial commission under the Commission of Inquiry Act, 1952 to look into all the aspects of the incident that took place on Tuesday.

The CM along with Deputy Chief Minister Prestone Tynsong, PHE Minister Renikton Lyngdoh Tongkhar and Minister for Revenue and Disaster Management Kyrmen Shylla will on Wednesday visit Mukroh village where the violence occurred.

"During our visit to Mukroh, we will meet the families of those who have lost their lives and hand over the ex gratia cheques to them," Sagma said.

The CM said he had a telephonic conversation with the Assam chief minister and discussed about the incident.

"During the discussion, I expressed our deep concern about the incident and briefed him about how the situation had led to the violence. I appealed to him that immediate action should be taken against the officials who are involved or responsible for the firing in Mukroh village," Sangma added.

A policeman and a forest officer, who were allegedly involved in the incident, have been suspended and the SP of West Karbi Anglong district has been transferred by the Assam government, he claimed.

"At the same time, the Assam government will take necessary steps to investigate the matter in consultation with us. They have assured of full cooperation to ensure that justice is done and those who are guilty are punished," the Meghalaya CM said.

Asked whether there will be any joint probe into the incident, the chief minister said, "The discussion will be done, and if necessary, we can explore that option. The cabinet has decided that we will go ahead with the judicial commission."

Responding to a question if the Assam government should also pay compensation to the families of the deceased, Sangma said, "I am of the opinion that it should be done. We are speaking on behalf of our government and going to give the ex gratia."

Meanwhile, the state government has decided to suspend all government programmes, including the laying of foundation stones or inauguration of any project till November 30, as a mark of respect to the departed souls.

"The government of Meghalaya has decided that all festivals across the state will be cancelled," he said.