Shah hails Modi for the 'peace and development' in north east 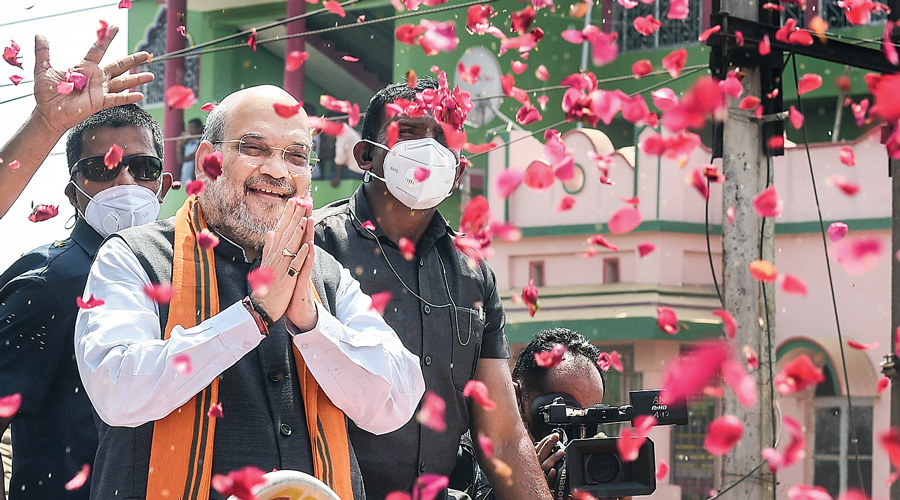 Union Home Minister Amit Shah on Sunday said Prime Minister Narendra Modi has cleared all roadblocks and taken northeast on the path to peace and development.

People of Assam have voted for the BJP for the second consecutive term as they have realised that there is no place for 'aatankwad' (insurgency) and 'andolan' (agitation) in the state", Shah asserted.

The irritants that had hindered peace and progress in the region have been removed. The journey of development that began more than five years ago must be accelerated, the Union home minister said, after launching two projects here.

Shah also said that the prime minister has always accorded priority to the northeast region, and has recently inducted five ministers from the area in his Cabinet, including former chief minister Sarbananda Sonowal.

"It is only in the BJP that a successful and Chief Minister makes way for a new one and welcomes with a pat on his back. Assam has gained in two ways - by getting a hardworking Chief Minister and a Cabinet Minister who is always there to think for the state", he said. Speaking of the various agitations that have riven Assam in the past, the home minister said perhaps no other state has suffered so much bloodshed and violence but what did they achieve - nothing. Shah also remotely laid the foundation stone of Tamulpur Medical College and Hospital, which was promised in the Bodoland Territorial Region (BTR) Accord.

Earlier, "we had planned to implement all the clauses of the Bodo Accord before the 2024 Lok Sabha polls but we have already initiated measures for the fulfilment of 90 per cent of the clauses and we hope to complete all by the 75th anniversary of independence", he added.

Accords earlier gathered dust with no government taking measures to fulfil it but the Prime Minister's initiative to take forward the accords signed with different organisations in the region has paved the way for peace and development, he claimed. Shah who offered prayers at Kamakhya Temple earlier on Sunday, also launched a new radiation therapy block in the state cancer institute at Guwahati Medical College.

He said another cancer hospital being set up by the central and state along with the Tata Trust was nearing completion and the "Chief Minister has assured me that it can be inaugurated by the Prime Minister by December this year.

The home minister ceremonially distributed financial assistance of Rs One lakh to 100 selected beneficiaries under 'Prarthana Achani' to the next of kin of those who lost their lives to Covid-19.

In Assam, 5114 persons have died due to the virus since last year.

Meanwhile, the Assam Rifles in a statement said that the Union Home Minister visited its headquarters in Shillong and interacted with jawans.

"In his first visit to the Assam Rifles, the Hon'ble Minister was briefed on operational and administrative issues of the Force by Lt Gen P C Nair, AVSM, YSM, DG Assam Rifles," it said.

"Had lunch and spent a good time interacting with our valiant @official_dgar personnel in Laitkor, Meghalaya. Assam Rifles, the Guardians of the North East, is India's oldest paramilitary force. The nation is proud of its bravery and courage," Shah tweeted.

Had lunch and spent a good time interacting with our valiant @official_dgar personnel in Laitkor, Meghalaya.

Assam Rifles, the Guardians of the North East, is India’s oldest paramilitary force. The nation is proud of its bravery and courage. pic.twitter.com/xHhC6ErwpV