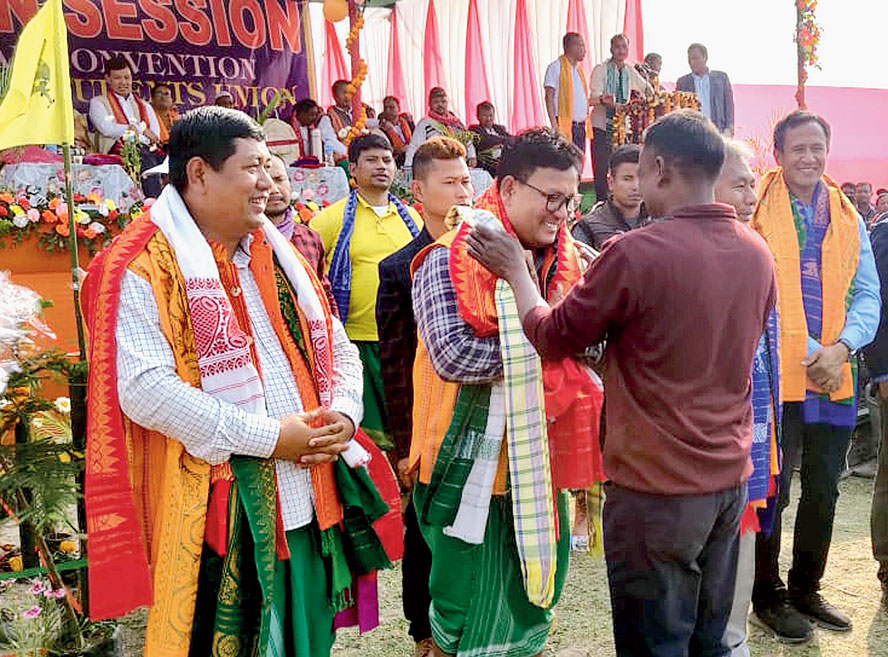 The All Bodo Students’ Union (Absu) has not given up on its demand for a separate Bodoland state despite claims by the ruling BJP governments at the Centre and in Assam after the signing of the Bodo Accord on January 27.

This became clear from one of the seven resolutions adopted by the Absu at its two-day special convention that concluded at Gwjwn Fwthar in Tamulpur in Baksa district on Thursday.

The resolution, which says that the Absu has resolved to “suspend” all forms of democratic protests for a separate Bodoland statehood for an indefinite period, shows that the statehood demand is very much alive and is in sharp contrast to the content of the accord which categorically says that the pact is a “final and comprehensive solution, keeping intact the territorial integrity of Assam”.

Assam cabinet minister Himanta Biswa Sarma, who was present at the signing of the accord in Delhi had also said “...all doubts regarding further division of the state have been put to rest and hopes and aspirations of the Bodos given due respect.” Prime Minister Narendra Modi had also said, “After signing this agreement, there is no demand left.”

The resolutions adopted by Absu at the convention are:

The movement for a separate state, or Bodoland as the Absu named it, was launched by the student union in 1987. It has since gone through different phases with the governments at the Centre and in Assam initiating corresponding measures to deal with the Bodos’ issues. The Bodo Autonomous Council (1993) and the Bodo Territorial Council (2003) and lately the BTR Accord have been the result.

Absu vice-president Dipen Boro, who took over as the group’s president from Promod Boro, told The Telegraph, “After the Bodo pact, we are hopeful that there will be ever-lasting peace in the region. We will work to bridge trust-deficit among other communities, excluding Bodos.”

He said Absu had high regard for Assamese language and, excluding the districts of Kokrajhar, Baksa, Chirang and Udalguri, Bodo would be the associate language.