The protesters barged into AGP party office and went on a rampage, breaking chairs, furniture and computers 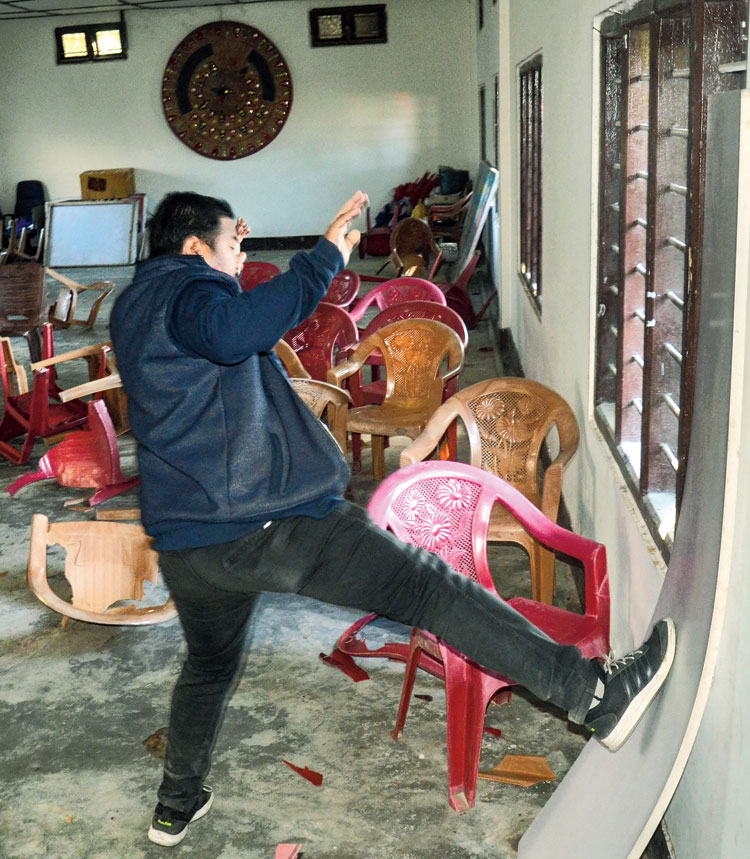 Violence marked anti-citizenship bill protests in Dibrugarh on Sunday as hundreds of activists of the All Assam Students’ Union (AASU) ransacked the district head office of the AGP.

Angry over the pro-bill stand of the AGP, the protesters barged into the party office at Chowkidingee and went on a rampage, breaking chairs, furniture and computers.

The protesters even tore papers and files of the office. The AGP members were caught by surprise in the middle of a meeting. Heckled and confronted, they fled the spot fearing physical assault.

“We were in the middle of a meeting when a large number of protesters barged into our office and vandalised our property. Realising the sentiments of the people against the bill, we have not filed an FIR. However, protests should be done in a democratic manner,” said Taranath Buragohain, the vice-president of the AGP’s Dibrugarh unit.

Dibrugarh superintendent of police Gautam Borah said, “The police have filed an FIR as they (the AGP) have not lodged a complaint yet. Five protesters have been detained. We are examining photographs and videos of the incident and action will be taken.”

Security has been tightened at the local offices of the BJP, AGP and RSS. The residences of the legislators have been secured by the police fearing attacks by activists.

The AGP, an ally of the BJP in the state, had hinted that the party will support the citizenship bill, inviting the wrath of the public.

AGP president Atul Bora who is also the agriculture minister, said the Centre has the requisite number of MPs and if they want to introduce the bill, the AGP cannot do anything. Reiterating that the party will always stand with the people of Assam, the AGP president had noted that it’s time to move on.

In Jorhat, the AJYCP’s Jorhat committee and several other organisations protested against the bill through various programmes on Sunday. The AJYCP took out a bike rally from Jorhat stadium at 11am and students of JB College staged a three-hour hunger strike.

In Udalguri, the family members of the first martyr of the Assam Movement, Khargeswar Talukdar, in the run-up to December 10, observed as Swahid Diwas (Martyrs’ Day), have shown solidarity with the people and lent support to the region-wide movement against the bill. Assam observes the death anniversary of Talukdar, who was killed in police action on December 10, 1979, as Swahid Diwas.

The brother of the martyr, Kameswar Talukdar, said at Uzanbarbari village of Barpeta district, “Our family vehemently opposes the bill and we appeal to the Centre and state government to thwart the implementation of the bill.”

Assistant general secretary of AASU, Jayanta Kumar Bhattacharjya, said, “If the bill becomes an act, the sacrifices made by the 855 martyrs of the Assam Movement will come to nought.”

Altogether 76 martyrs’ families had returned the mementos conferred on them by the state government on Martyrs’ Day in 2016, in protest against the bill when the Centre tried to table it in Parliament in January.