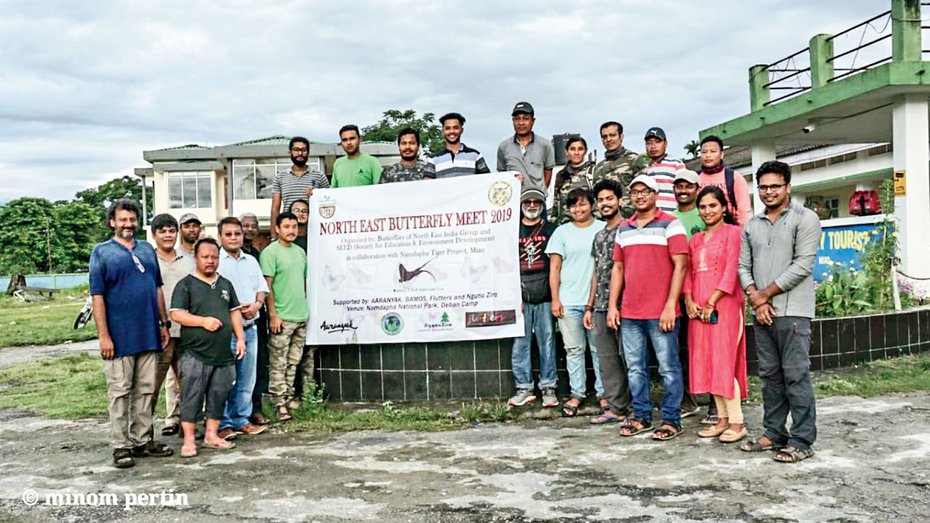 Minom Pertin, the deputy director of SEED said recently they had organised the Namdapha butterfly meet at Miao and a large number of participants across India participated in the event.
File picture
The Telegraph   |   Dibrugarh   |   Published 11.03.20, 06:46 PM

Altogether 410 species of butterflies were recorded during a survey at Namdapha National Park in Changlang district of Arunachal Pradesh.

The survey was carried out by the Society for Education and Environmental Development (SEED) of the state.

Minom Pertin, the deputy director of SEED, told The Telegraph, “Our NGOs have recorded 410 species of butterflies at Namdapha National Park during our survey and three months ago we have submitted our report to the forest department. We have done a three-year survey at the national park and park on butterfly. We have found the rarest butterflies at Namdapha.”

He said recently they had organised the Namdapha butterfly meet at Miao and a large number of participants across India participated in the event.

“During the meet we recorded 176 species of butterflies at Namdapha. We organised the third Namdapha butterfly meet in Miao,” Pertin said.

The park harbours a rich biodiversity of flora and fauna and many rare species, including brown gorgon, yellow gorgon, tailed sulphur and brimstone found at Namdapha.

Namdapha is the largest protected area that falls under the eastern Himalaya biodiversity hotspot.

“It is an excellent butterfly destination in the Northeast and we will urge the government to make Arunachal the butterfly capital of India,” Pertin said.

“Our main focus is to make people understand the importance of butterflies. In many places the population of butterflies has been dwindling because of deforestation and if it continues then we will lost many rare species,” Pertin added.

He said they had organised the butterfly meet to create awareness on butterfly conservation.

“We appeal to the communities of Arunachal Pradesh to come forward to conserve nature,” Pertin said.