Tripura would be transformed into a model state within three years of the new government, Biplab has claimed 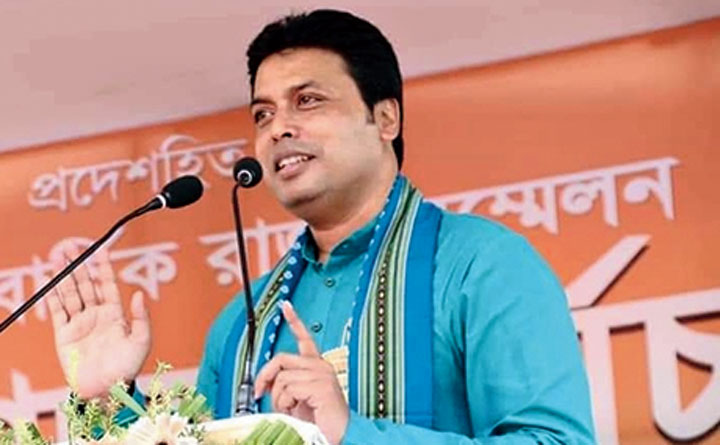 Tripura chief minister Biplab Kumar Deb has announced that out of 2,300 who got government jobs, 1,903 got regular jobs in the state after the new BJP-IPFT government was formed nearly two years back.

A press release issued by the chief minister’s office (CMO) late on Monday night said: “A section is spreading rumours but the fact remains that during the tenure of the new government more than 2,300 government jobs were given out of which 1,903 were regular jobs. Now those who get government jobs — unlike the previous system — do not have to walk in any political rally or be present at meetings. They do not have to meet any leader or an MLA in his party office or wait for 10 years after applying for a job. The deserving candidates now get jobs through a transparent recruitment policy.”

In the press release, Deb further said: “It is very unfortunate that some people are continuously trying to mislead people. They have failed because only truth prevails. If anyone tries to mislead you by saying: ‘What have you personally gained from the new government?’, then ask that person if he can assure a government job, a house, a loan or any other government facility. If not, he should not play with people’s innocence. The people of the state have already been denied by those who had deprived people on the basis of political identity.”

Before coming to power in the 2018 Assembly elections, the BJP had promised that it would ensure employment for all and would fill up 50,000 vacant posts in the state government.

He added: “Those who are sensible can realise the positive changes in Tripura. But those who are unable to recognise this transformation will not be able to cope with the development that is going on under the dynamic leadership of Prime Minister Narendra Modi. Before the Assembly elections Tripura was associated with all negative forces. Now the people of the state believe in a better tomorrow, seeking development which is positive.”

Deb also reassured that within three years of the new government, Tripura would be transformed into a model state.