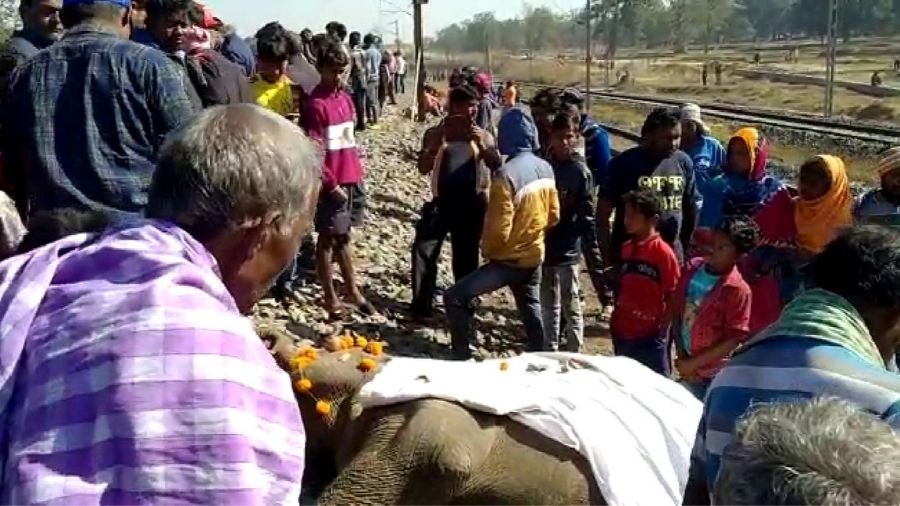 Residents of Bisra gather at the spot of the accident in West Singhbhum on Thursday.
Picture by Bhola Prasad
Pinaki Majumdar   |   Jamshdepur   |   Published 04.02.21, 06:00 PM

Two elephants were killed after being hit by a speeding goods train at Bisra near Manoharpur in West Singhbhum district, about 180km from here, in the wee hours of Thursday.

The tragic incident occurred past 1am when the two wild elephants were crossing the railway tracks between Bhalulata and Jeraikela railway sections in an area close to Odisha's Sundergarh district.

The train was running at a speed of around 100 kmph when it hit the two jumbos. “It was an unfortunate incident which took place at around 1.10am. A probe has been initiated in this regard," said Sanjay Ghosh, chief public relations officer of South Eastern Railway.

Ghosh said all the four-wheels of the front trolley of the parcel van (next to engine) got derailed after the mishap. The senior railway official added that no speed restrictions were imposed by the forest department in that section.

The carcass of one of the two elephants that died after being hit by a speeding train at Bisra in West Singhbhum on Thursday.
Picture by Bhola Prasad

Restoration work at the spot of mishap got completed around 9am after which train services in the section resumed.

Death of jumbos in train accident continues to be a serious issue. Though several attempts have been made by the forest department and railways to avoid them, nothing seems to have served the purpose.

On December 5, the Bhubaneswar-Rourkela Intercity Express had hit an elephant near Gargadbahal village between Jujumura and Hatibari area of Sambalpur district killing the jumbo on the spot. The spot of mishap was close to Jharkhand-Odisha border.

In September last year, a wild tusker was hit by a speeding train and killed on the spot at the Howrah-Mumbai main trunk route in the Saranda forest area of West Singhbhum, about 190 km from Jamshedpur.