Three in police net for selling drugs from home 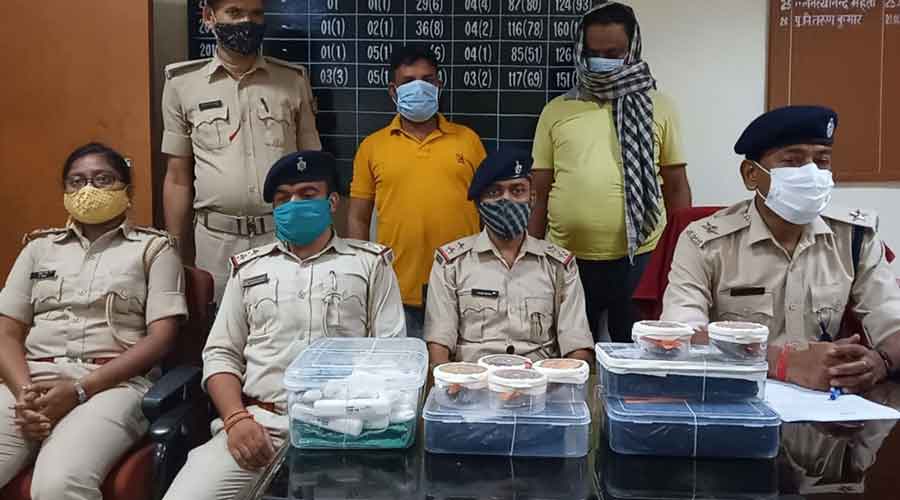 In a major breakthrough against drugs peddling, police seized huge quantities of marijuana and prohibited drugs like Nitrosun-10 tablets from three houses in the densely-populated Garib Nawaz Colony under Jugsalai thana area on Saturday.

The team led by deputy superintendent of police (Law and Order) Faiz arrested three persons, including a woman during the raid.

Those arrested were identified as Mohammed Nausad (40), Amzad Ali (46) and Shamima Begum (46), all residents of Garib Nawaz Colony.

From the houses of those arrested, the police team recovered stocks of Nitrosun-10 tablets, marijuana and Correx whitener.

The OC of Jugsalai thana Tarun Kumar said they had received a tip-off that some drug-peddlers are selling narcotic drugs and other intoxicating substances from their houses in Garib Nawaz Colony.

"On the basis of the tip off, superintendent of police (City) Subhash Chandra Jat set up a raiding team led by DSP (Law and Order) Faiz Akram on Saturday morning.  A police party surrounded the entire colony and raided the houses of the suspects. During the search operation, the team found the stocks of marijuana, Nitrosun-10 tablets and Correx whitener from the houses of all the three accused," said Kumar while addressing a media conference.

The OC said the Nitrosun-10 tablet which is highly-intoxicating is sold at medical stores on production of medical prescription only.

"Now, after a huge quantity of Nitrosun-10 tablets were recovered from the houses of the three accused, the police are trying to find out the medical store that had supplied them. The accused would sell the tablets to addicts at a wishful rate, "the police officer pointed out.

The police are also trying to find out the shop that had supplied the seized Correx whitener in large numbers.