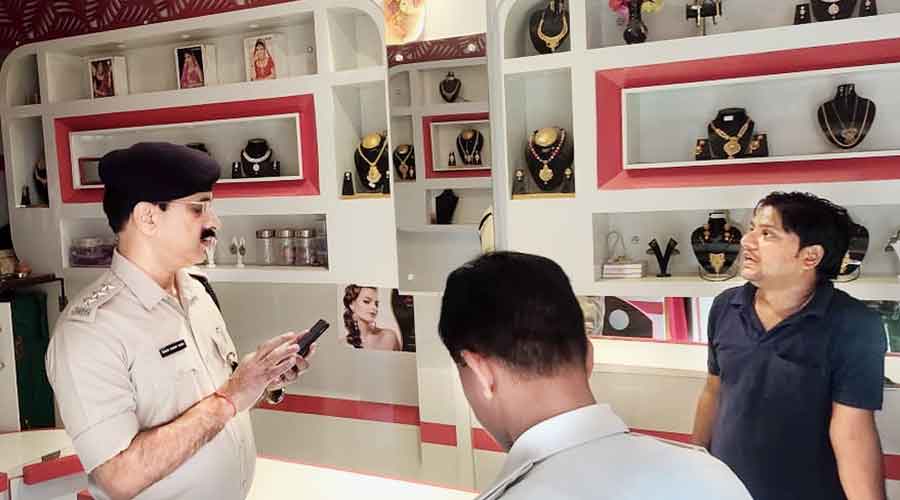 Police at the jewellery shop in Garhwa from where the jewellery was stolen on Thursday.
Picture by Shabbir Hussain
Animesh Bisoee   |   Jamshedpur   |   Published 22.10.21, 12:27 AM

A thief wearing a PPE kit stole jewellery worth Rs 50 lakh from a shop in Garhwa of Jharkhand early on Thursday, police said.

“During our investigation of the CCTV footage, we found one person wearing PPE kit and carrying a bag leaving the shop.

“The thief had not broken the shutters to enter the shop which is on the ground floor while the owner stays on the first floor.

“The owner suspects that a thatched hut situated adjacent to the building might have been used to reach the roof and enter the house.

“At the moment we are investigating the case and cannot say how many persons were involved in the crime,” said Garhwa superintendent of police Anjani Kumar Jha.

Police said the CCTV footage shows a person wearing a PPE (personal protective equipment) kit and face covered with a cloth to escape identification leaving the shop with a bag on his back around 3am.

“We suspect that the incident took place between 2 and 3am early on Thursday. We suspect that someone who is close to the family or who knows where the key of the almirah where jewellery is kept might have committed the act,” said a senior district police official.

The shop owner has in his complaint stated that all family members had gone to sleep on Wednesday night on the second floor.

The complaint stated that the key of the almirah was kept near the bed on the first floor from where the thief must have got access to it, opened the almirah, took the jewellery and escaped from the house.

Police found that no shutter or lock had been broken in the house.

Garhwa is around 250km from Jharkhand capital Ranchi.