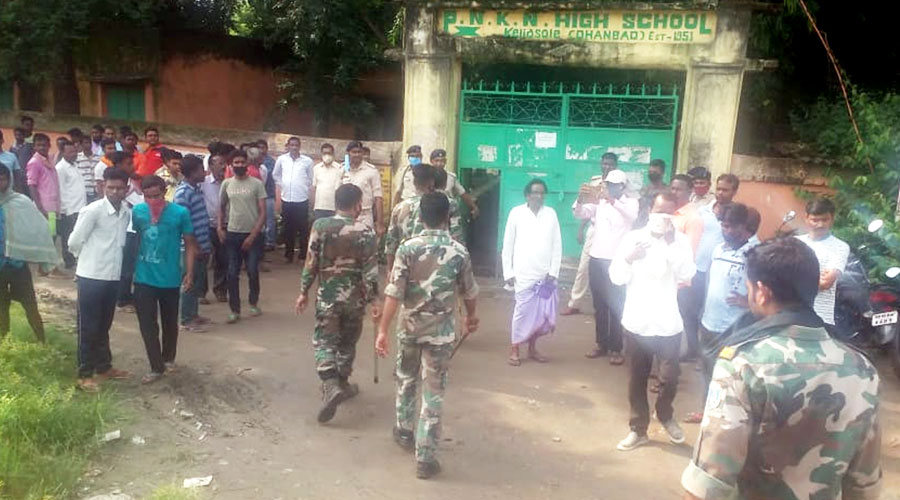 The dead body of Prakash Gorai found hanging near the PNKN High School in Keliasole, Dhanbad on Friday.
Gautam Dey
Our Bureau   |   Published 10.10.20, 05:50 AM

A hand cuffed nude body of a thief who ran away from Kalubathan Police outpost was found hanging from a tree on Friday.

Prakash Gorai, 25, a resident of Upchuria area of Nirsa block was arrested on Wednesday for stealing and re-selling mobile phones.

Gorai fled the station from the toilet after his arrest.

“Though it seems to be case of suicide but we will not leave anything on chance and carry out a detailed investigation after carrying out a detailed enquiry,” claimed Kushwaha and said that the body has been sent for post-mortem to PMCH.

Chairman of Dhanbad District Board, Robin Gorai said, “Since the deceased was arrested by police and his dead body was found today around 1 km from police station, it raises doubt over the role of police and a detailed enquiry is required in  the case.”

A rain fed Pipra river washed away a 14-year-old boy in Barhi on Friday, around 50kms away from Hazaribagh.

Vinod Hansda was returning home in Pipra village on his bicycle and tried to cross the river but was washed away by the high tide.

Villagers launched a search but failed to find him.

Daltonganj police and civic officials on Friday held a meeting to discuss traffic de-congestion plans during the festive season.

Sub divisional police officer Sandip Kumar Gupta said the LIC road is the most congested area because of road side vendors.

Gupta said the focus will be on parking and barricading to avoid bottlenecks.

Lorries entering the state will be monitored so as not to cause any traffic trouble here.

The entry and exit time is from 9 at night to 9 in the day.

The Dhanbad Covid hospital at Jagjivan Nagar will be relaunched after its renovation on September 22.

The renovation is being carried out by the district administration in association with BCCL.

Dhanbad Deputy Commissioner, Uma Shankar Singh said the hospital will now have a 30 bed ICU facility for seriously affected Covid patients and equipped with other state of the art facilities.

Prakash Kumar, an employee of a rice mill of Giridih  who went missing on Friday morning was found by Dhanbad Police  from Bank More area.

Prakash claimed that he was abducted by a Dhanbad resident,  Upendra Singh, from Bank More area while he was heading towards Deoghar in his car.

Dhanbad police denied his abduction for ransom claims and said that he was held by some finance company recovery agents over non payment of EMI for his car but was later released.